Why is Bill Ayers speaking at GreenFestival?

Why is Bill Ayers speaking at GreenFestival?

GreenFestival, a project of Green America and Global Exchange, purports to be an experience for young and old alike to celebrate “in sustainable style” the food and philosophy of the green movement.

The festivals are taking place across the country; this past April in New York, this weekend in Chicago, and upcoming dates in Washington, DC, San Francisco, and Los Angeles.

The green movement isn’t just a subset of the progressive philosophy. Rather, it’s the religion that’s taken over the left whose underlying principles are such that Weather Underground terrorists and Occupy activists fit right in at their family-friend festivals.

Bonus: who can spot the Anonymous presence in the background of this photo from the festival today? 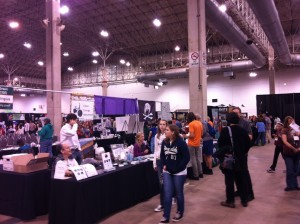 I cancelled my subscription to Landscape Architecture Magazine because things are such that a sentence is ungrammatical now to these people if the word “sustainable” isn’t in it.

I just want to look at some nice designs, not be lectured how a sustainable design is going to save the world. Can’t I just eat my waffle?

The flag of Anonymous above the blue-shirted guy eh?

You got it! Funny how there’s no American flags to be found.

Why? Because he is the darling of the socialists.
All of these schmucks drove there using gas that they abhor. What a pathetic bunch. In the words of the late, great Marie Antoinette,” Let them eat grass.”

Except Marie Antoinette did not say that at all.

There is considerable doubt as to what she did say given she only spoke Court French -being Austrian herself & had not seen a commoner since she was traded as a 14 year old .

She was by this time a recluse in her little boutique 1 acre farmlet inside the royal grounds. She loved to be with the animals & children so maybe she was the original Greenie SAHM .

But she was doubtless blonde & beautiful which has always annoyed peeeps.

A better question would be is “Why is Bill Ayers not in federal prison?”

Not only is he not in prison, he’s teaching our children at yet another indoctrination center.

Because W. Mark Felt authorized an illegal break-in on him. Yes, Deep Throat himself. Google COINTELPRO.

“Guilty as sin, free as a bird!” – Bill Ayers upon his acquittal.

As James Delingpole explains it in “Watermelons: The Green Movements True Colors,” environmentalism is the perfect refuge for communism, because it allows those who are red on the inside to put a layer of green on the outside, and continue to spread their toxic theology. Indeed, the green religion is the last bastion for crazy marxists.

“Delingpole observes, one of his friends from university is now prime minister of a government that is spending £18 billion a year of your money to put giant death-ray lasers on every British hilltop in preparation for alien invasion. They are cunningly disguised as wind turbines.”

I just took a look at the Global Exchange website. They’re honoring Bradley Manning. Daniel Ellsburg is accepting an award on his behalf. They have an article called “Cuba: Public Education – A Legacy of Literacy and Learning.” That’s all I could take.

Family friendly?? It sounds like the whos-who of the Communist Party.

I’ve never understood why Bill Ayers is allowed to walk around a free man.

Why is Ayers there?

Because it is a WATERMELON patch…!!!

For the same reason that Gorbachev was reinvented as an environmentalist – they’re both Commies!

More disturbing is that Bernadette Dorhn has never recanted the gleeful reaction to the Charles Manson murders.

It is too disturbing to quote here but easy to find.

Later she held an academic spot at North Western in a child centred discipline. (please correct me if I am wrong on this – I lose track of anything Chicago….it is all too bizarre)

[…] sentiments may seem “extreme” to some people, but are inspired by the news that terrorist Bill Ayers is speaking at the GreenFestival.Category: EnvironmentalismComments /*designed to be parodiedALEISTER: Best. Hannity. Interview. […]

Instapundit » Blog Archive » WHY IS BILL AYERS SPEAKING AT GREENFESTIVAL? “The green movement isn’t just a subset of the progre… | May 7, 2012 at 1:08 pm

[…] IS BILL AYERS SPEAKING AT GREENFESTIVAL? “The green movement isn’t just a subset of the progressive philosophy. Rather, it’s the […]

[…] of a feather: So why does the speaker lineup at today’s event, heavily marketed as family-friendly and all […]

“(please correct me if I am wrong on this – I lose track of anything Chicago…. It is all too bizarre)”
FrontPage Magazine’s “Discover The Networks” database is a useful resource for looking up individuals, organizations, etc.