Splitting Hairs: What’s Hillary Up To?

Splitting Hairs: What’s Hillary Up To?

Hillary’s hair color–and length–have been changing over time. Is it splitting hairs to ask what this might mean?

With the news that Biden’s not polling so well in several swing states, it’s tempting to take a look at any signals we can glean from Secretary of State Hillary Clinton as to her potentially replacing him as the VP nominee.

This Wednesday when she spoke during a Senate Foreign Relations Committee hearing, we got a look at a different shade of hair color from the “bottle blonde” we’ve gotten accustomed to over the past decades: 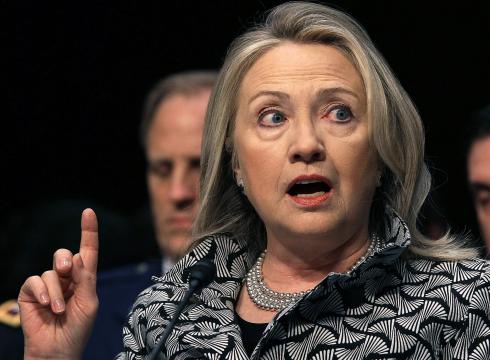 Earlier last month, Elle Magazine reported on a length-of-hair change from the Secretary of State:

When she’s on the road, she often has it pulled back in a simple chignon or ponytail, a look that causes Hillary Hair Watchers much chagrin but merely means she’s pressed for time, as a State Department official told me: “As a chick, it’s a big pain in the butt. The weather is different, and you’re in and out of the plane. [The staff] gets off that plane looking like garbage most days, but she has to look camera ready. She said the reason she grew her hair long was that it’s easier. She has options.” The official added, because, it seems, no American alive can resist critiquing Clinton’s hair: “But some of us are looking to ban the scrunchies.”

Hillary’s explanation signals “I’m busy, I’m taking care of business–and this isn’t the same me of years past.”

A few months ago, the Obama campaign adjusted the font in its campaign logo from a sans serif to serif, which signals values like “strength,” “gravitas,” and “seriousness.” Hillary’s hair color adjustment from blonde to gray just might be an attempt to signal similar qualities.

What is clear is that Hillary has been carefully honing the aspects of her brand she does have control over–her “cool” factor, for one. When she adeptly interacted with the “Texts from Hillary” website, she said to the world, “I can take a joke, I’m not all hard edges.”

Biden might want to make sure he isn’t asked to “pull the plug” on his VP spot.

Biden was supposed to bring gravitas…

Instead, all we got was gaffy-tas.

But getting rid of Biden would also mean that Obama admitted a mistake.

As the years have passed Hillary’s appearance brings to my mind images of Soviet or German prison guards.

And THOSE were the Comedy Review All-Stars of 1945…!

Over at The Weekly Standard, William Kristol has written an article entitled “Why Not The Best?” http://www.weeklystandard.com/articles/why-not-best_645186.html?page=2. He argues (with-tongue-in-cheek?) that Obama-Hillary would be the best for Obama and the Democratic party. And, and he states that this would make a Romney victory so impressive. I surely disagree. Given the current polling with Biden still on the ticket, wouldn’t Hillary replacing him send the numbers for Obama into the re-election zone?

Unless she publicly promises to take him to Fort Marcy Park on January 21, he’s still the Prez and she’s still #2.

She’d help the numbers, but not enough is my bet.

Replacing Biden would be seen as an admission of failure, perceived by the nation as abject panic by the Obama and the Democrats. Precisely the wrong narrative the Democrats want to project in the final 60 to 90 days of the campaign.

There is no way that Dear Leader asks a Clinton to pull his roasting chestnuts from the open fire. His ego won’t allow it, because, as he pointed out, “I won.”

I’m sure that the crowds of Dems that adore PIAPS would love to see this happen, but I don’t think that she has enough juice to save him at this late date.

Yes, it could be that the time has passed for an Obama-Hillary team.
Yet, what concerns me is, e.g., the Daily Presidential Polling numbers as reported by Rasmussen. Looking at the “Total Approve” category, the lowest number for Obama this year has been 44%. From the 13th of this month thru today, the percentage has been 46% or higher.

These numbers are ones that have been rather consistent throughout his presidency. I would like to be optimistic; however, I don’t know whether we (as in “We the people . . .) have learned all that much these few years. And, even if we have, how well prepared are we to change some of our attitudes and behaviors to restore some balance in our country?

Is it just me .. or does Hiliary look like she’s ready to retire in the 2nd, longer hair, picture ?

When Joe got the hairplugs they drilled the holes too deep.

Glad someone got it!

If you are someone who has ever been haunted by the spectre of male-pattern baldness, you got the joke immediately.

When I was 27 and first noticed what I thought might be a tiny bit or recession in the temple areas, I asked my mom if she noticed anything, certain that she would reassure me.

She somewhat nonchallantly said, “Well, your grandfather was almost bald by the time he finished high school, so you might lose your hair …”

I didn’t talk to her for a week or two. Well, I’m older now and still have most of my hair, so I guess I took after my dad more in the hair department.

So, I can laugh at your joke Anne, … with special thanks to Propecia!! 🙂

LukeHandCool (who isn’t taking any chances … baldness remedies work best preserving what you’ve got … and seem to be a bit disappointing regaining what you’ve lost).

If only your Mother had told you that you were 1/32 Cherokee, your hair would be full and black. I have never seen a bald Indian, except for those who shaved some part of their heads like a Mohawk.

Instant lame duck. She would make him wish he hadn’t been born. He might seek asylum in Kenya. Triple Presidency: Hill, Bill, and whatsisname.

I wouldn’t bet my house but I think Obama knows that, and I think his people know that. (Biden may have wobbled a bit on Intrade. My connection is flaky today so I can’t be sure.)

Kenya will not take him. After the last few years even they are denying he was born there.

One of the most uninteresting people in public life I’ve ever seen. Has a single interesting thought ever emerged from her mouth or pen?

She even makes serial lying and conniving boring.

What in God’s name explains her popularity?

Hillary’s appearance has always said, “I really do not give a sh!t about honing my appearance for photographers. And that is STILL what it says.

If Hillary wanted to be VP she would have done it four years ago. There is no upside for her to do it now.

If she is planning another run for the top spot she’s better off spending the next 4 years as a private citizen.

Not that I’m a Hillary fan any more than Obama, but the larger a defeat Obama suffers this coming November, the more Hillary and Bill can stand and say “I told you so” to the Democrats, to re-embrace “New Democrat” political triangulation.

No head of IMF-NO PEACE!!

(if anyone has any data on her accomplishments as Secretary of State, holla–I still have her as null and void)

Does getting drunk in every country she visits count as an accomplishment?

I call it a plan.

Geez, I don’t believe the problem is at the bottom of the ticket as much as it is at the top!

What is Bill up to?

I’m not sure that is the hairstyle of somebody who wants to run for office. If she was really thinking about Veep, you would see more of her “natural” hair color returning, more posed photographs of “Ready-to-serve” Hillary looking all professional as she…ummm….does whatever the SecState does.

And Bill would not be caught in photographs with…ahem…actresses in Monaco.

I see two possibilities here. One, he needs those Dems, that still blame him for ruining his chances and the other, will I really don’t see another. If I had supported Hillary (God forbid) I’d still be mad, and see this as throwing her a bone when he’s deep in–as Pres. H.W. Bush would say, dodo. As for Hillary, right now she’s in the administration, but not deep in the administration. She’s always here, there, and everywhere. She has a plausible excuse if things go pear shaped. If she becomes the VP it’s go down with the ship and that could scuttle her chances for 2016. Also, the thought of both of these people leading the country at once is enough to give one nightmares. Another thought, think how often she would steal the spotlight. Mr. I’m the One wouldn’t be pleased about that. No, for all our sakes I hope she cuts her hair, make a flower necklace, and joins a commune somewhere. Say Burma. Just a thought.

Welp…that last photo proves Rush was right about watching her age. Regarding her appearance, it looks to me like she’s reverting back to her college days.

That being said, I just can’t see her willingly helping Obama.

She is a joke, so she might as well be able to take one.

This woman is as big a contrivance as ‘Barack Obama,’ and not as competent. (How’s that for a ‘joke?’)

She’s always has been and always will be a divisive character. Her ‘appeal’ is propaganda.

Leftist women prefer her over Obama, but most women see through her and the media baloney about her.

Forgot this: if she runs as V.P., she’ll at least pick up the Big Vodka endorsements.

Hill is trying for the ancient Cherokee look. She heard that she can make inroads if she ‘put on’ this heritage.

What no photo of her kicking back in Cartagena?