You know the general election has started when ….

and the mere mention of Jeremiah Wright sets off a dog whistle which only The NY Times, left-blogosphere and Republican nominee can hear: 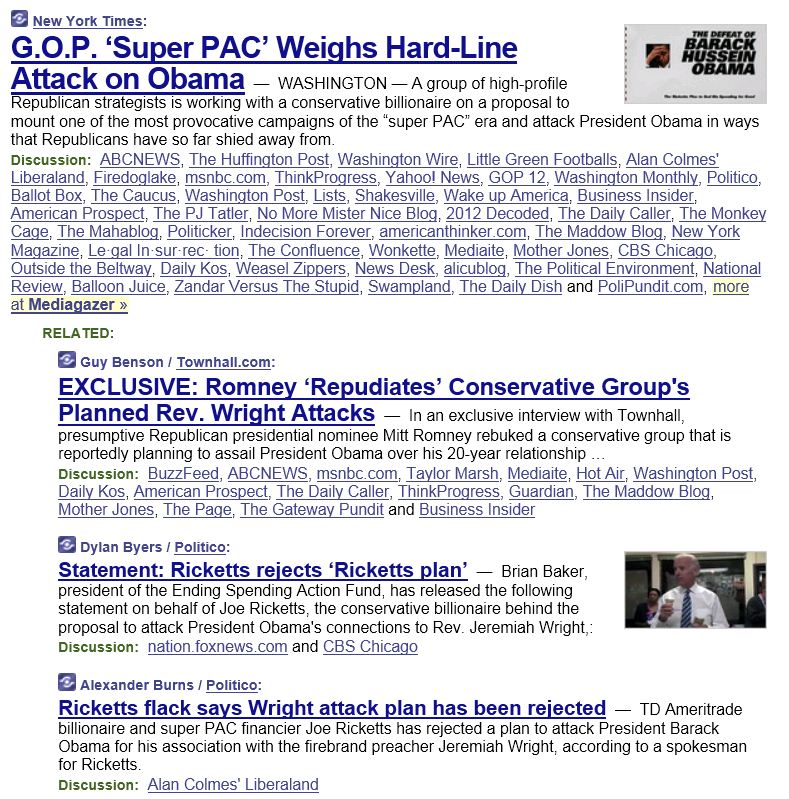 You see, when it comes to Barack … Obama, there is nothing new under the Sun:

The suppression of legitimate political expression through false accusations of racism by the Obama campaign and its supporters is the defining theme of the 2008 campaign.

Thank goodness. If the campaign has started then it is nearly football season!

For some of us, who were convinced that it takes more than being able to give a fairly decent speech to be a good and effective president, the general election of 2012 began when Obama won the 2008 one!

You see, when it comes to Barack … Obama, there is nothing new under the Sun

Hopefully the voters will heed a newer saying that starts, Fool me once, shame on you,…

Poor guy. His name is still a hindrance … even after he gave up being the even more exotically named “Barry” Obama … they just won’t accept him … except to the Ivy League and the U.S. Senate and the presidency.

What was his name when, with no record of achievement, he beat a well-known, white war hero who, up until then, was often a darling of MSM journalists, by over 7% and by nearly 10 million votes?

His name is almost as much a hindrance to success as is being liberal and female is to working on “The View.”

Likable? Seriously, what is to like about him? Don’t get me wrong, I certainly don’t hate him. But why oh why do people find him likable?

I find it almost impossible to find him likable.

For a while it was pronounced “BAA’rick” (like in Kenya).

Then it became “b’ROCK”. Fancy.

He either went through a very early mid-life crisis, or he has some of the same identity issues as Al Gore.

Does Romney actually think the democrats wouldn’t have pulled a similar stunt? Naive.

Suppression is easy when you have such an acquiescent suppressee. Romney nearly tripped over himself to surrender (“abjectly” comes to mind). And this after the media tore like hungry jackals into the seemingly bogus ancient-history account of his “bullying” episode. He rolled over on that one, too.

The question is, is this a purposeful strategy? Is the conservative base meant to accept this temporary demoralization in the hopes of a devastating smart warfare plan later? Is there some larger secret cunning going on? A political rope-a-dope? Does he REALLY plan to go after Obama with the same ferocity Obama plans for him, but through proxies and SuperPacs?

Or is this the same pathetic, clueless, unilaterally disarming, suicidally civil Republican loserdom?

Please don’t tell Barry that while he wasn’t looking his trump card became a joker.

Elizabeth ‘s dress is way too short. In the 60s when hemlines were high girls (yeah not middle aged ladies ) still had the etiquette of sitting with thigh high min skirts . Knees strainght to gether. Also everyone wasmuch thinner then & their legs were not gym humped into rhino proportions.

The proper length for face on camera is about 3″ below knee so that on sitting it is mid knee at most. A small side slit would allow for todays hefty legs .

A motley gaggle dressed for a Saturday afternoon baby shower.

b’ROCK is apparently still evolving his persona. Confused. Schizophrenic, even. To fit on this stage set, he really should be dressed more like he was for the bin Laden situation room.

Just showing that Romney doesn’t have the stones to fight for anything. Just wants to keep his “friends” in the press happy. Who, of course, are never going to like him now that it Mittens vs. their boy.

You know the general election has started when … Obama starts in with the BS excuses. I think most voters can see through this. And Obama’s already started to blame them for not understanding what a swell job he’s doing. Now I wonder how that might turn out … http://bit.ly/qVdDUt