Today.  But, but you say, wasn’t it already celebrated on April 26?

Yes, but that’s according to the Hebrew calendar.  May 14, 1948, was the date under the Christian calendar of actual independence (photo via Israeli Ministry of Foreign Affairs): 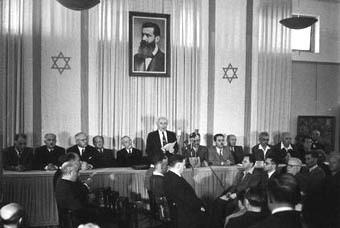 But there are two Nakba’s as I’ve detailed before, with more Jews fleeing Arab lands than Arabs fled lands which became part of Israel.

To mark the day, some Israeli students took part in the Nakba ceremonies:

Far-right MK Aryeh Eldad called the Nakba “a day of celebration” as he led dozens of activists who protested a ceremony meant to mark the Palestinian “catastrophe” by students at the university.

Hundreds were gathered in front of the university, holding signs and yelling slogans. Police maintained a heavy presence between the two groups.  Three protesters, two from the right and one from the left, were detained….

The university’s decision to allow the ceremony caused an uproar on campus and in Jerusalem. The Education Ministry called the event “mistaken and saddening,” but university management decided to allow it to take place.

It’s time to push back against the false narrative of Palestinian victimization which has embued so much of the rhetoric.

The truth is that the Arabs started a war, and lost, and there was an exchange of populations as a result.

It’s worth replaying Bibi Netanyahu’s speech before the U.N. in September 2011:

This situation reminds me of how many of the Japanese (not all) view the atomic bombings.

Many love to use the killing of many innocents as a politicized guilt trip.

Who would not feel sorrow standing in a museum, looking at a picture of a young school girl and reading about her life, looking at the contents of her backpack that have been fried … the sweet, little girl vaporized.

But then, one is reminded of the words of Golda Meir:

“When peace comes, we will perhaps in time be able to forgive the Arabs for killing our sons, but it will be harder for us to forgive them for having forced us to kill their sons.”

Many know the invasion of Japan would have resulted in horrific casualties.

But few realize between 250,000 and 500,000 civilians were being killed throughout Asia every single month under Japanese occupation at that time in 1945.

War is hell. Innocent civilians are killed and people are displaced. But those starting the wars can hardly complain about the consequences of the outcome.

Israel is wise to have Netanyahu as their leader. Imagine having a leader who goes before a hostile world and defends you and tells the truth instead of bending over and apologizing.

Netanyahu talks a good game, but his actions speak louder, and they say the exact opposite of his words. He speaks loudly and carries a nerf club. Ask the Jewish residents of Chevron what they think of his resolve; ask Shalhevet Pass’s parents, or Nati Ozeri’s widow and orphans. Ask the residents of Migron, whom he is threatening with expulsion from their homes; or the 10,000 whose expulsion from the Gaza strip he supported and facilitated. Ask the people in Bet El, now facing the demolition of their homes, what they think of the oath he swore before the fresh graves of Etta and Efrayim Tzur, that they would “never ever” be evacuated.

Netanyahu made a great foreign minister, and a pretty good finance minister. He was a good UN ambassador. But he’s been a disaster as PM.

We used to have Presidents who weren’t afraid to defend the US, then we got one who apologizes at every opportunity.

Bibi Netanyahu’s speech before the U.N. has a permanent home in my favorite YouTube videos….I find that it stops just about everyone in their tracks when they try to argue with me about ‘Palestinian victimization’

First of all I think you implicitly hit on something. Why is “Naqba day” celebrated on the Christian date instead of the Islamic date? If the Palestinians celebrated it in November, February, August and all around the year, it would have no resonance in the West.
Another important point is that the fellow who coined the term “Naqba” wasn’t referring to the dispossession of the Palestinians, but rather the failure of Arabs to modernize. Here’s Barry Rubin:
Constantine Zurayk was vice-president of the American University of Beirut. His book was entitled The Meaning of the Disaster. Here’s the key passage:

“Seven Arab states declare war on Zionism in Palestine, stop impotent before it and turn on their heels. The representatives of the Arabs deliver fiery speeches in the highest government forums, warning what the Arab states and peoples will do if this or that decision be enacted. Declarations fall like bombs from the mouths of officials at the meetings of the Arab League, but when action becomes necessary, the fire is still and quiet, and steel and iron are rusted and twisted, quick to bend and disintegrate.”

This is the old style of Arab discourse. Zurayk openly acknowledged the Arab states rejected all compromise, made ferocious threats, and invaded the new state of Israel to destroy it. For him, the “nakba” taught that they needed to modernize and democratize their system. Only thoroughgoing reform could fix the shortcomings of the Arabic-speaking world. What happened instead was another 55 years of the same thing, followed by this new era opening last year which will probably also bring a half-century of the same thing. Nakba has become the opposite of what Zurayk wanted it to be: Blaming your opponent rather than acknowledging your own shortcomings and fixing them.

Cliff May also had an interesting related column recently. One of the mechanisms by which the Palestinian grievance has been perpetuated has been the unprecedented use of “refugee” to describe the Palestinians. Well guess what. Someone wants to fight that.:
A few members of Congress have figured out what’s going on and plan to do something about it. Senator Mark Kirk (R., Ill.) is working on an amendment to the Fiscal Year 2013 State-Foreign Operations Appropriations bill that, for the first time, would establish as U.S. policy that only a Palestinian refugee can be classified as a Palestinian refugee — not a son, grandson, or great-grandson, and not someone who has resettled and taken citizenship in another country. The Kirk amendment would require the secretary of state to report to Congress on how many Palestinians serviced by UNRWA fit the traditional definition of a refugee.

Representative Howard Berman (D., Calif.), ranking member of the House Committee on Foreign Affairs, also is considering legislative options in response to these problems. At the very least, these approaches would ensure that descendants of refugees would be listed — with unaccustomed clarity — as “descendants of refugees.”

They might still be eligible to receive UNRWA “services,” but as “Palestinian Authority citizens” who could look forward to becoming citizens of a Palestinian state — if and when the Palestinians come to the conclusion that establishing a Palestinian state is worth what it will cost: giving up the dream of destroying the Jewish state. Too few Palestinians are there yet. If Congress can rein in UNRWA, more may be moved in that direction.

No doubt this will make some heads explode at the New York Times.

The reestablishment of Jewish sovereignty in the Middle East marks the end of Muslim and specifically Arab occupation of the land. While that is notable it is also immaterial. All nations are formed through coercion and compromise. The Jews and their allies responded to a war of aggression and were victorious, which actually elevates their moral authority in this dispute. Their nation has the same legitimacy as any and every other empire, nation, kingdom, tribe, etc. in this world.

Israel is the Jews’ to lose. Let’s hope they remember how they previously lost possession… as a decadent, liberal, and unprincipled people, who were defeated, raped, and enslaved then displaced. This is also why Islamic ambitions were eventually tempered. This is also, incidentally, the history Americans would be wise to avoid repeating.

“Comments for this entry are currently under maintenance but will be restored soon.”

Imagine some Boston University students holding a demonstration of 4-July protesting atrocities committed against tories by the American revolutionaries. Imagine it happening with university approval and assistance. Now imagine it happening in 1813. Or for that matter in the 1830s or the 1840s. It would be universally considered the next door neighbour of treason.