Today, new footage surfaced from the Occupy/ F*** the Police march Tuesday in Chicago. [Language warning, not safe for work].

The video shows a side of the Occupy / F*** the Police march not shown by the mainstream media. The media continues to ignore the radical messages and tenor of the Occupy protests, rising in advance of the NATO summit this weekend in Chicago. They are either unwilling or unable to capture this type of footage by standing on the sidelines.

Aware that the message “F*** the Police” and actions during the march may be harmful to their message, Occupy is taking pains to distance itself from the FTP march:

Occupy videographer (and hacker) Tim Pool (@Timcast on twitter), who livecasted the entire event, was one of the most vocal deniers of Occupy’s connection to the march. Pool has made a name for himself by streaming Occupy’s events over the past year–and even employs a drone to capture aerial footage. According to his bio on facebook,”Tim Pool is a journalist whose unique style of interactive broadcast journalism exists at the intersection of social and mainstream media. His live coverage has been featured by news outlets such as Reuters, MSNBC, and Al Jazeera English.”

Throughout his broadcast, Pool told his viewers, “This is NOT an Occupy march!”

Why are Pool–and Occupy itself–so concerned with distancing the Occupy brand from this “nonviolent” march, even as Occupy both promoted it on twitter and encouraged its members to attend: 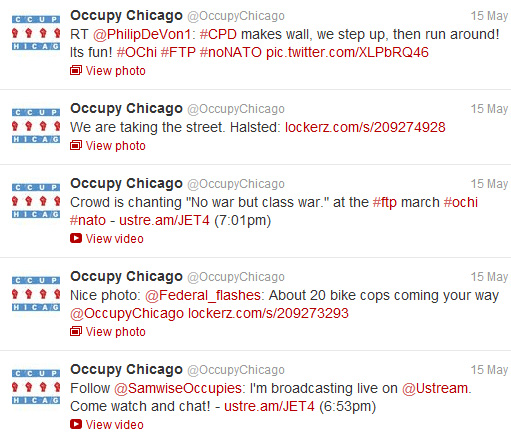 They realize that when everyday Americans, like the ones in the video fed up with Occupy marching through their neighborhoods, see the movement for what it is, they will lose their pretense of representing anything but the fringes. As long as the media continues its lazy coverage of the movement, Occupy receives the mainstream spin it needs.

How stupid do these Revolting Eloi think we are…????

Provocations IS the whole motive.

Yes provocation is the motive. Witness the Noam Chomsky interview that made the rounds a day or two ago. Chomsky embraced Sarah Palin’s dismissal of “hopey-changey” Obama but in the full interview he was positively glowing about the authenticity of the Occupy movement. This is, as we all know, the left’s lunacy on parade. Obama is clearly not provocative or sufficiently left-wing to suit any of them. The Occupy movement is what they are left to embrace.

I am not sure the media continues its lazy coverage to protect Occupy so much as it is trying to protect Obama from association with a group that polls lower than the tea party these days. I would bet the media has already concluded Occupy is as fringey as Rev Wright and Bill Ayers.

“I would bet the media has already concluded Occupy is as fringey as Rev Wright and Bill Ayers.”

Which, as we know, shows they KNOW that BOTH are tied closely to Pres. Dog Breath.

Yep, I agree. The media demonstrated it today in their hyperventilation over the mere mention of Rev. Wright. I have Hardball on and Matthews is all in “high dudgeon” mode over Rev. Wright and the fact Romney used the word aircraft instead of plane. This is how they roll, take a harmful issue against Obama and try to smear conservatives for having raised it. MSNBC is trotting out the usual tactics – only Raaaaaaaaaaaacists think Rev. Wright is still relevant.

I can’t watch Matthews without hazarding my TV’s happy life!

“F*** the Police”, the expression anyway, is obviously nonviolent. It’s like “Make Love (Not War). Emphasis on “Make Love”. It’s just a generational difference in terminology.

I just have to say…

Donna Summer was one of the most divine creations EVAH.

If that makes me a pig-dog…well, there it is…

Puhleeze, do this around election time so the voters can see what the next 4 years will look like.

Ahh youth. The sweet flowers of creation. Just think, the future leaders of our country stride among these fine young people.