It’s NATO week in Chicago. The Occupiers, anarchists, socialists, unions, and other professional protesters are in the process of “couch-surfing” their way into town (for those who aren’t occupying foreclosed housing) for the NATO summit that officially takes place May 20-21.

Yesterday, eight protesters who were part of around twenty people who protested the Obama campaign headquarters downtown volunteered to be arrested:

About 20 protesters made it up the escalators from the lobby to the second floor, where their attempt to reach Obama’s campaign offices stalled when security guards shut down banks of elevators. The rest remained in the lobby, singing and handing fliers to passing office workers as a dozen uniformed police stood behind them. Outside, a phalanx of bicycle officers lined the sidewalk.

One of the main protest goals is to use the media to illustrate a violent crackdown on their actions. And the media is complicit, reporting on their “peaceful” protests. Marching down the streets chanting “F— the police” is not peaceful.

The “Chicago Spring” website shows a clenched fist with the Chicago “L” subway lines streaming out of it. 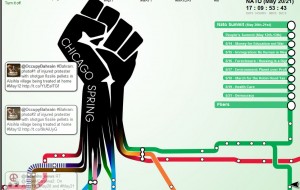 Numerous trainings from last fall to this week are aiding the protesters in how to interact with and manipulate their interactions with the police. For example, the following training occurred this past Sunday:

How To Disarm A Police Officer: Strategy and Tactics For Dealing With Law Enforcement On The Front Line

When  Sun, May 13, 7:30pm – 8:15pm
Where  Unit 501, 500 W. Cermak (map)
Description  “How To Disarm A Police Officer: Strategy and Tactics For Dealing With Law Enforcement On The Front Lines” The police have numbers and weapons, while activists are armed with their brains, their voices, and the justice of their cause. This workshop considers how activists can leverage their advantages to minimize law enforcement’s interference with their activism. Jerry Boyle is a Chicago lawyer who has worked with many groups, none of which are eager to have their names associated with this particular presentation.

Domestic terrorist turned University of Illinois professor Bill Ayers taught “nonviolent direct action” to Chicago Occupy last fall in the following video, where he laughed at the notion of Occupiers acting lawfully. When one questioner asks if they will need to resort to violence in order to achieve a real revolution (at 4:32 mark), Ayers says:

What I would say is that violence is built in–do i think you should resort to violence? Absolutely not. I think you should use your brilliance, your humor, your wisdom, your body to dramatize the violence that actually exists….the revolution that I have in mind is one where we–a real revolution involves masses of people transforming itself….but I do think there will be some times where we get into a trick bag where we’re supposed to be somehow pristine and precious and somebody like Barack Obama…is saying ‘I want you all to be nonviolent.” Well I want YOU to be nonviolent.

In the meantime, the storefronts on Michigan Avenue, the main boulevard in Chicago, and surrounding areas are preparing for the “nonviolence” by covering every inch of exposed windows with plexi-glass: 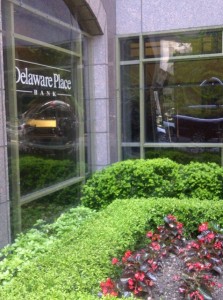 Protest organizer Andy Thayer also painted the potential of violence as coming from the police in an interview with one of the leaders of Occupy Chicago, Micah Philbrook, who said:

The sheer fact of it is, as far as Occupy Chicago stands , we’re in solidarity with everyone who’s comign out to protest NATO. From the Democrats to the Unions to the radicals that show up, we all have grievances…violence, like Andy said, is routinely done by the state and the police….we are a peaceful, nonviolent movement. All of the coordination we’ve done is stressing nonviolent political action, centered firmly in nonviolence.

An employee of BMO-Harris reports that the company sent out an emailing stressing that employees not show up to work in suits, but rather dress down to avoid being targeted.

Somehow, Chicago seems the perfect place for this sort of thing

I work right downtown. I will probably work from home on Monday – too many idiots afoot.

I would like to see NATO take their conference to Disneyland where they can join the rest of the characters.

The people in our Chicago office are going to try to work from home, too, Sally. Glad I don’t live there. (The “Occupy” clowns were enough of a pain here, and they didn’t block the streets.) You have my sympathy.

So you don’t like NATO, Sally? Silly girl, I’ve been dealing with that attitude for decades, and although the excuses change the real reasons are constant: Anger that the West (and especially America) would defend itself.

Ann Althouse had this a few weeks ago:

3 days ago CBS 2 reported on an e-mail that the Red Cross sent out to volunteers in the Milwaukee area:

It said the NATO summit “may create unrest or another national security incident. The American Red Cross in southeastern Wisconsin has been asked to place a number of shelters on standby in the event of evacuation of Chicago.”

As if we don’t have enough “nuttiness” in Wisconsin. God forbid that some of those evacuees stay around long enough to vote in our recall.

That would be the ULTIMATE failure of both the Obama Presidency and the Rahm Emanuel Mayorship of Chicago both to protect the people and to guard against the forces of darkness that are eternally trying to break down our door.

You want to watch an administration implode and a party FLEE from their candidate? If something big happens have Mitt Romney come out and state that “We warned you. The failure of the administration to protect the citizens of Chicago shows just how careless this administration has been with national security and shows just how desperately we need a change in leadership.” It will be CLASSIC.

It’s a calculated risk of creating a “rally around the flag” response (especially amongst Democrat voters), but far more likely to create an anti-Obama and anti-Democrat landslide (especially amongst Independents) in November as the public realizes that this administration’s Liberal policies CAN’T and WON’T protect the people and as every Conservative candidate calls out the Democrats on the now glaring consequences for forcing military cuts instead of fixing the underlying budget problems when those Democrat candidates had the chance.

Chicago Cops typically have a low tolerance for dissent.

They’ve never had any problem at all with peaceful, effective dissent.

Fire bugs and other morons who use public events as an excuse for crimes, however, do meet with a notable lack of tolerance.

Since these ar probably “occupy” types, you forgot the “mostly”. As in “mostly non-violent”.

Commie thugs. Totalitarian swine who view a society’s decency as a weakness to be exploited.

The only reason they pretend to be nonviolent is they know an outright attack has no chance—yet.

(And I write as a libertarian for whom law-enforcement overreach is a priority concern.)

I wonder how Rahmbo is going to handle this crisis? After all, he believes he shouldn’t ever let a crisis go to waste! (I wonder if he got a kickback from the tear gas vendors?)

I’ve always wondered why NATO summits aren’t held in place like, say, Camp David, or within a tightly guarded and access controlled section of a major installation. Andrews Air Force Base for example, or maybe Pearl Harbor or San Diego. Somewhere where the Riot Police are MPs in full combat gear and the limos are escorted through the gates by Humvees with .50 cals on the top.

It’d make the occupy crowd less willing to do stupid shit. And better still, do it with a place with it’s own airfield.

It’s because the diplomatic grandees who attend these events want to go out to expensive restaurants and stay in high end hotels.

I dunno: Back in the 80’s anti-nuke “peace” creeps were breaking into Air Force bases and vandalizing stuff. They (with good reason, unfortunately) weren’t worried about being shot then, either.

“You never let a serious crisis go to waste.”