This article at the NY Post about Chris Christie’s visit to the Wailing Wall in Jerusalem fairly is characterized as “one long fat joke.”

New Jersey Gov. Chris Christie made a huge impression at Israel’s Western Wall yesterday during his first official overseas trip as head of the Garden State.

Christie, wearing a yarmulke with his name and title embroidered on it, brought his political heft to the holiest Jewish site in Jerusalem, where he laid his hands on the rough-hewn stone, his eyes shut in prayer 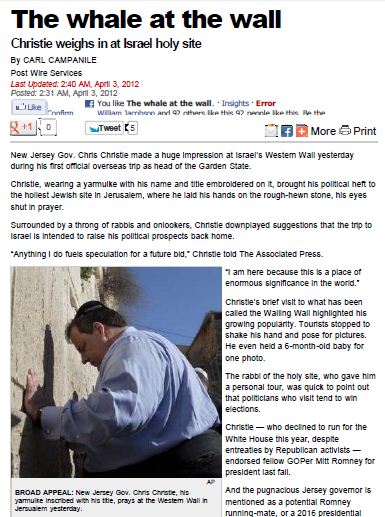 Obviously quite tasteless, but damn, Christie has got to be well over 300 pounds at this point.

Go out and walk 30 minutes a day, buddy, and switch to Diet Coke for crying out loud.

Jeez, I knew Christie was taking a bite out of the Democrats, but I didn’t know think that was literal.

I like the guy, but he’s a heart attack waiting to happen.

As much as I loathed Her Royal C, I tried to refrain from ad hominem attacks because they’re a sure sign that those who resort to them can’t argue the issues.

And HRC could be an easy target.

Well, the headline is nasty, but seriously, Christie needs to start taking care of himself. I don’t know if the stress of the job is getting to him or what, but his weight is dangerous to his health.
That’s not being mean, that’s stating the obvious.

It’s nobody’s business but his.

True: it’s his business.
I don’t worry too much about the NYP’s snark. It’s borderline cruel, etc. but I’m sure the Gov puts up with worse.
What I want to see is for the NYP to start making jokes about how butt-ugly and dried up Justice Ginsberg is. How about a little balance?

Christie’s weight was no secret when he ran for office. You can not assume anything about his health judging by his girth, whether he has high blood pressure or high cholesterol levels, because his could be normal. Besides, skinny people suffer with those problems just like overweight people do.

I don’t know how much the voters need to know before they vote. I do know we knew next to nothing about Obama. But this harping on Christie’s weight is not warranted. Let him worry about his own weight.

High blood pressure he most assuredly has. However, cholesterol level is more determinable by genetics, as are heart heath issues.As someone who is overweight himself, there are people half my size that would kill for my normal-to-low cholesterol levels.

Christie is a public figure with obvious physical characteristics that leaves him open to valid criticism. However, in the context of the article to come down on him like a ton of bricks is just wrong.

Maybe so but it probably sold a few extra newspapers!

Christie is certainly young enough that his weight is unlikely to impact his ability to serve at this point or through the near future. If he hasn’t gotten his weight under control by ten years from now, then, yeah, it might be something for voters to consider if they are the nit-picking type. That’s their problem. I have to scratch my head even about that, though, because I don’t remember any media hue and cry or obama-support gangs wringing their hands or joking about obama being a smoker.

We can’t tell by looking at Obama or any of the members of the black caucus if they carry the sickle cell trait, can we? I’ll bet some of them do. I’ll bet there are some Jewish elected officials who carry tay-sachs, but we can’t see that, either. Does Bawney Fwank carry AIDS? Does he have heart disease? He’s overweight, too. What we SEE is Christie carries new joisey fat-boy’s disease, but it gets HIM ridiculed for it ONLY because he’s a ‘pub.

My issue with Christie isn’t his weight. It’s that he’s not conservative enough. Have a box of donuts and embrace the 2nd Amendment, Chris!

I’m unaware of one single joke about Jerry Nadler that ever came from the left. I am aware of hundreds, perhaps thousands, of jokes about Sarah Palin’s appearance, who is svelte and attractive after having 5 – count ’em, 5 – kids.

It’s not Christie’s weight that makes him fair game. It’s his politics. His weight is just a convenient port of entry for their vitriole.

BannedbytheGuardian in reply to JackRussellTerrierist. | April 3, 2012 at 10:24 pm

That was one killer pair of heels under a black ninja outfit. Hipsters no less.

Aww Chris Christie – he got that retro look going.

I am finding it very refreshing. I think I like it & I just can’t hide it.

It’s the Western Wall. “Wailing Wall” is a negative image that derives ultimately from an antisemitic way of looking at the world, as if Jews are constantly wailing.

this is the juvenile level of journalism we have today. sigh.