@hilaryr Tweets of the Day

@hilaryr Tweets of the Day

Twitter was lit up today with the @hilaryr controversy.  If you are not on Twitter, you need to be.

Both Hilary Rosen and Ann Romney were trending during much of the day.

Here are some of the better ones I picked out:

This exchange had me laughing pretty hard, for reasons long time readers will remember (btw, we’re all good now): 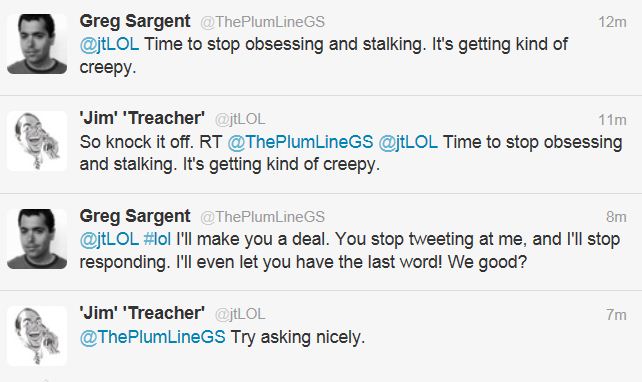 One of the sub-themes of Rosen’s attack(s) that keeps my irony alarm wailing:

Ann Romney is financially privileged so she couldn’t possibly understand the plight of the working mom. But Rosen does. Rosen pulls down what? $400k/yr?

The Left is “outraged”. The Right is laughing.

No doubt who won the skirmish.

Who cares? Want to piss off the left, talk about he debt

And I’ve got linked that Twitchy thread of the awful progressive attacks on Mrs. Romney as a “c**t,” “whore,” and more.

Engaging in an online tussle with Jim Treacher is like kicking sand in a honey badger’s face. Not any old honey badger. A honey badger-energizer bunny hybrid.

Them there animals keep fighting even after you cut their heads off.

Treacher was doing the same thing to the Professor.
Except, the Professor didn’t deserve it.
Anger management, Jim?

I actually like JT, but sometimes he just loses it.

Jim Treacher fascinates me when he’s gotten a hold of a chew toy.

So, I gotta soft spot in my heart for Jim. And, his idiosyncrasies aside, I do read him and appreciate his work.

At least this attack by Jim was justified.
The one against William was not.

The Professor just seemed amused. It all seemed to be in good fun.

These are all very good Professor Jacobson, but Vodkapundit found the best one of the day:

The woman who “never worked a day in her life” just won a media war with a career political communication “expert.”

I think Michelle Malkin has it right: The attack on Ann Romney helped push doubting conservatives into his camp.

That’s exactly what I thought when Rush was talking about Rosen today. Geeze Louise, who knew the first Romney to be slimed by Team O would be his wife Ann?

That is because they fear Ann Romney. Okay, I get that. But they went after her in a hamfisted way.

I do agree with that part and it is driving conservatives to Romney. I just enjoyed the wit of the Tweet that Stephen Green found by Jon Gabriel: https://twitter.com/#!/ExJon/status/190314035927986176

Did an image search on Hilary Rosen… Now I know what Rosie O’Donnell would look like if she died her hair blonde.

Giving advice (from Massachusetts, yet) to conservatives is like exhorting kittens to do close-order drill, but:

For once, finally, the Alinsky Left’s underlying ugliness is exposed for all to see. The longer they stay in denial, the better.

There are times and places to fight ugly with ugly, but not right now.

What? Are you saying she’s ugly?

I just said she looks like a movie star.

Hilary Rosen: “Ann Romney has never worked a day in her life.”

The scientific definition of work:

Where W, (Work) equals the product of F (an applied force, in this case, Hilary’s ill-chosen comment) on an object (in this case, the GOP electorate) and x, the distance the object is moved (in this case, all the way over squarely behind the Romney’s in defense of Ann).

Thanks, Hilary. As Ringo would say at the end of a grueling day of practice, “It’s been a hard day’s night.”

You did a heckuva lot of work with just one sentence!! Like music to our ears!!

[…] push-backs, double-downs, and White House clarifications, this tactic was full of fail. In fact, Dr. Jacobson has a “Tweet of the Day” that shows just how full of fail this has […]

Great reporting. I just saw another tweet – from FLOTUS. What’s left in their damage-control arsenal?

@hilaryr: The gift that keeps on giving!

Drudge has POTUS chiming in. The narrative is Fluke’d.

MUT’s Badass of the Week: Ann Romney — Some humorous aspects of my analysis of the Rosen fiasco: 1) A Mormon mother tagged as a “Badass”; 2) A reference to how Ann Romney will be Palinized with email inquisitions, requests for clothing expenditures, and rumors of affairs; and, 3) A hilarious pain scale, with an addendum as to how much pain Team Obama is in right now.

Wondering if he Wikipedia page has been “updated” recently to reflect the fact that she is a woman of minimal means, who scratched and clawed her way, and was never, EVER a lobbyist, especially for BP

…and never ever heard of Barack Obama..ever.

And that she personally knows 3 Jay Carney’s.

[…] attack on Mrs. Romney exposed, yet again, how progressives treat conservative women, it also fired up conservatives to rally around Mitt Romney.So I guess we should all be thanking Hilary Rosen.Related […]

Read Pundit and Pundette’s take on the matter (sorry, I’m not good on links and there’s no edit feature here)- especially note Michelle Obama’s take on being a stay at home mom from her interview with Vogue…

“And speaking of women being forced by difficult financial circumstances to work when their kids are small, here’s Barack Obama on his own wife’s titanic struggle:
President Barack Obama said that after his two daughters were born, he and his wife—both Harvard Law School graduates—could not afford the “luxury” of having her stay home with the children.

In 2005, when Obama began serving in the U.S. Senate (and his daughters turned 4 and 7), he and his wife were earning a combined annual income of $479,062. Barack Obama was paid a salary of $162,100 by the U.S. taxpayers, and Michelle Obama was paid $316,962 to handle community affairs for the University of Chicago Medical Center.
$162K? How could a family of four survive on that?
“Once I was in the state legislature, I was teaching, I was practicing law, I’d be traveling,” he said. “And we didn’t have the luxury for her not to work.

“And I know when she was with the girls, she’d feel guilty that she wasn’t giving enough time to her work,” said Obama. “And when she was at work, she was feeling guilty she wasn’t giving enough time to the girls. And like many of you, we both wished that there were a machine that could let us be in two places at once. And so she had to constantly juggle it, and carried an extraordinary burden for a long period of time.”
Et cetera. Suffice it to say the Obamas clung bitterly to their lucrative sinecures and personal chef. But they were crying inside all the while, so that makes it admirable.

Back to Ms. Rosen. Is there anyway this can’t backfire on the Left? Howard Fineman tweets: “Great idea to win suburban swing voters: attack MS-suffering mother of five.”

Just heard Laura Ingraham quote from this 2007 Vogue piece on Michelle Obama, entitled “The Natural” (irony apparently unintended):
Then, too, there is that little-discussed fact that staying home with children can be—how else to put it?—less than intellectually stimulating. “The days I stay home with my kids without going out, I start to get ill,” she says. “My head starts to ache.” When she mentioned it to her mother, Marian Robinson told her daughter she didn’t think Michelle could handle the boredom of staying home with kids. Obama was surprised to hear that taking care of her had been boring, but now she embraces the idea of discussing it openly.
Because she was so brilliant, staying home with her little girls made her physically sick. Lol.

Well, have you seen how Michelle likes to vacation?

All of this support for Mrs. Romney but not a peep for Palin.