A series of events in the past few days give every indication that Dick Lugar is losing the primary race, and his campaign devolves into almost bizarre and frantic accusations against Mourdock.

While Lugar’s campaign had denigrated the polling because the pollsters were hired by the Mourdock campaign or supporters, the Lugar campaign curiously has not released its own internal polling:

And here’s the dog that didn’t bark: In his new pre-primary FEC report (PDF), Lugar shows a payment of $10K to Republican pollster National Research on April 9 for “polling research.” That’s on top of almost $74K he spent last quarter on the same expense. But of course, we haven’t seen any recent internals from the Lugar camp. If their numbers offered any cause for optimism, don’t you think we’d have seen at least a glimpse by now?

Lugar also is getting desperate with two mass mailers personally attacking Mourdock.  The first mailer tries to link Mourdock to Obama with a photoshopped image of the two together.

This is particularly ironic for Lugar, who MSNBC dubbed Obama’s Favorite Republican in light of Lugar’s help given to Obama in the weeks leading up to the 2008 election.  The Mourdock campaign has made much of the title MSNBC gave Lugar, and it must be working for Lugar to send out this mailer: 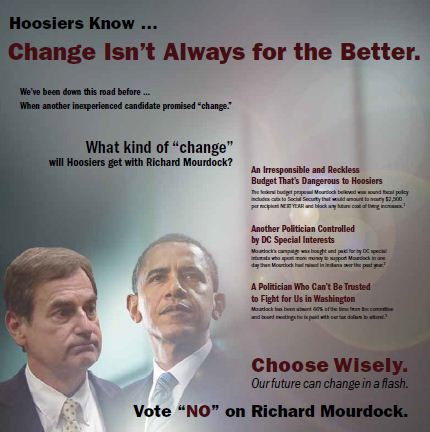 Lugar also has sent out a mailer calling Mourdock untrustworthy: 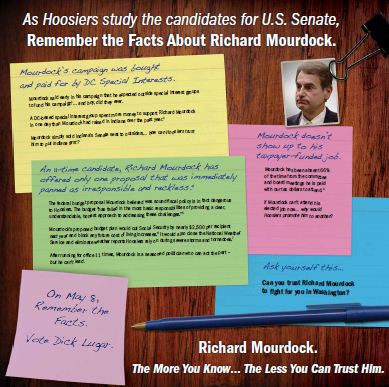 The mailer contains a blatently misleading statement that Mourdock does not show up for his “state funded job.”  That is false.  Mourdock’s job is state Treasurer; he also serves by virtue of his job (ex officio) on various state boards for which he normally sends a representative.  At best Lugar is being misleading, at worst lying, with this accusation: 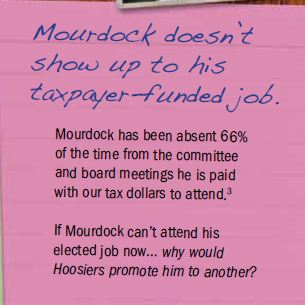 The momentum also is slipping away, with the American Conservative Union backing Mourdock, and last this afternoon, Sarah Palin announced her suppport for Mourdock:

I join commonsense conservatives in endorsing Richard Mourdock to be the next Senator from Indiana. Conservatives of all stripes are uniting behind Richard Mourdock. It’s not just Indiana that benefits from sending the right Senator to serve for the right reasons; the nation as a whole benefits, and that is one reason why the eyes of so many around the nation are focused on the Indiana race.

Indiana deserves a conservative in the Senate who will fight for the Hoosier State, uphold our Constitution, and not just go along to get along with the vested interests of the permanent political class in D.C.

Richard Mourdock is the conservative choice for Indiana. Senator Lugar’s 36 years of service as a Senator are appreciated, but it’s time for the torch to pass to conservative leadership in Washington that promises to rein in government spending now.

Lugar, for sure, is not out of it.  He’s getting tepid help from Mitch Daniels, but many of the big names in Indiana are sitting it out, not endorsing either candidate.

To show how out of touch Lugar is, he has rolled out a radio campaign featuring Pat Boone:

Conservative crooner Pat Boone lent his voice and support to Sen. Richard Lugar of Indiana via a radio ad on Friday in hopes of helping the six-term incumbent beat back a challenge from the right.

Lugar hasn’t lost yet.  But he’s losing it.  And he knows it.

Let’s go Governor Palin. Can we reprise 2010? I suspect Obama may more damaged than conventional wisdom allows presently. LI has been doing a good job vetting but Mitch McConnell and John Boehner need some spine. Let’s supply them some in the form of an energetic, informed, conservative 113th congress.

Pat Boone would be better advised to continue writing his “Love Letters in the Sand,” thereby staying away from Dick Lugar.

The chorus from the song bears directly on Lugar and his many years of non-obedience to the Constitution to which he has taken the oath to obey.

While this criticism can be leveled at far, far too many reps and senators spanning far, far too many years, voters have to start somewhere in removing those who refuse to follow the basic, fundamental thesis of the Constitution, viz, to limit the government.

Lugar, a RINO for sure, has been more than happy to expand government at every turn.

“Lugar, for sure, is not out of it. He’s getting tepid help from Mitch Daniels, but many of the big names in Indiana are sitting it out, not endorsing either candidate.”
And, apparently,severely conservative Mitt Romney doesn’t want to get involved either.
http://firstread.msnbc.msn.com/_news/2012/04/27/11430269-romney-to-stay-neutral-in-indiana-senate-primary?ocid=twitter
“That schism, between the party’s establishment and conservative wing, is on full display in Indiana. Tea Party groups like FreedomWorks have backed Mourdock, as did the fiscally conservative Club for Growth.
But Republicans like Indiana Gov. Mitch Daniels have endorsed Lugar, setting up a proxy fight between the two wings of the GOP in a couple of weeks.”

I’m rooting for the conservatives.

“And if not, she’ll get no blame: Remember, both Romney and Mitch Daniels have endorsed Lugar so he’s gotten the Republican establishment’s gold-star seal of approval.”

If Romney endorsed Lugar, it’s just more proof that he only stands for losing more slowly.

And now it gets really interesting–
http://www.breitbart.com/Big-Government/2012/04/27/Its-On-McCain-Backs-Lugar?utm_source=feedburner&utm_medium=feed&utm_campaign=Feed%3A+BreitbartFeed+%28Breitbart+Feed%29

“Even as McCain is endorsing Lugar, McCain’s former running mate, Sarah Palin, is endorsing Lugar’s challenger, Richard Mourdock. Lugar’s support for Obama Supreme Court nominees Sonia Sotomayor and Elena Kagan has become a sticking point for Tea Party activists upset at Lugar’s perceived wishy-washiness. With Palin and McCain now on opposite sides of the race, this nomination battle is certain to become a hot spot for the Tea Part vs. establishment Republican Party battle that has been brewing since 2009.”

I live in Indiana and this would be a great win for Indiana, the US Senate and the Tea Party. Two events, today in Indy and one in Ft Wayne tomorrow.

Re: Romney endorsement of Lugar

He IS the establishment’s candidate, while Sarah, and many of us are the great unwashed.
Why the surprise?