@AngiesList stands up to #StopRush

@AngiesList stands up to #StopRush

I check in every now and then with the efforts of the Limbaugh boycott movement at the Twitter hashtag #stoprush.

I noticed over the past few days a lot of chatter and anger directed at @AngiesList, as well as at new local advertisers on the Limbaugh show (screenshot from 4/17). 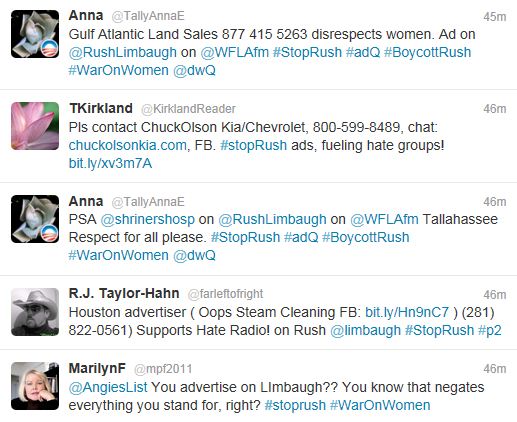 Then I saw today via Twitchy that Angie’s List has responded to the boycott movement by telling them, basically, to pound sand:

Now the Media Matters operative behind the anti-Limbaugh effort is upset:

If you stop by the #stoprush hastag or do a search for angieslist, you’ll see not only threats, but that people like @Serr8d are contacting Angies List and praising its stand: 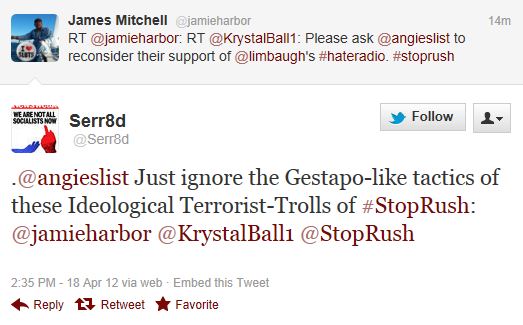 This is not about Limbaugh.  It’s about whether the social media intimidation tactics will continue to work.

It’s like gun control.
The liberal/progeressives/socialists/fascists want to control our lives. They will stop at nothing to control us. The free market is anathema to them.
If you don’t like Rush, don’t listen to him, but don’t tell me that I can’t listen to him.
When I want to hear crap, I watch msnbc, but not for more than 30 seconds. My eyes and ears burn.

More and more companies are becoming educated to the terror tactics of the Left as they attempt to mobilize their minions – who are neither current nor potential customers for most of these firms – to Astroturf a seeming grassroots movement. They’ve witnessed the other companies trying to walk back their panicked reactions and seen Limbaugh say, “No thanks, jackass!”

ECON 101: A guy with a radio audience of 25 million adults a week is going to sell advertising. It’s a very cost effective way to reach mass numbers. It really doesn’t matter much what he’s saying, what matters is who is listening – and buying.

This is where it really helps to have lots of us on Twitter. It doesn’t matter whether you have 7 followers or 7000 — you can still drop @AngiesList a mention letting them know you support them. MAKE SOME NOISE.
http://twitter.com/s_dog/status/192712049111998464

I never thought in a thousand years I’d have a twitter account, but s_dog summed it up perfectly. Gotta let those who stand up to the left know that those loud screaming voices are not representative of America as a whole.

I also noticed that Carbonite had an ad on Hannity last night (Monday night?), the night Huckleberry was added to the panel to announce his new show. Does anyone know if Carbonite will be a high-profile sponsor on Huckleberry’s new show? That should kill any hope for that show right there.

Rush is leaving WPHT 1210 AM (a CBS affiliate) here in Philly. They are moving Michael Smerconish into his time slot. So in the last 2 years, this radio has gotten rid of Glen Beck, Sean Hannity and now Rush.

Someone mentioned Rush is moving to an FM station but I haven’t heard any confirmation of that yet.

This link might help…..I’ve used it to find other stations and also listen to shows that were dropped or moved into different timeslots in my area:

Excellent resource, Joy. I use it often.

LifeLock is offering a special to Newt supporters of, I believe, first 30 days free and 10% off the first year. I think that’s what they offer to Rush listeners, or used to.

Good for LifeLock! THANK YOU, LifeLock!

I just love the fact that the hyper-intellectualized left curls into a thumb-sucking fetal position every time some midwestern college drop-out on the radio calls them on the carpet. They are obsessed with the man. I’d be embarrassed for them if I wasn’t laughing so hard.

They’ve had to resort to bullying, both governmental and billion-dollar, in an attempt to shut him up. Thus far to no avail.