Summering on The Vineyard, wintering at Zuccotti

Summering on The Vineyard, wintering at Zuccotti

So proud!  Can’t wait to tell all the summer friends on Martha’s Vineyard how Amber confronted the fuzz at Zuccotti Park, just like we did at Columbia in ’68.

Thanks to reader Joe, who writes:

Saw this bumper sticker this morning while cycling through Nyack NY, a community made up of many transplanted New Yorkers from the Upper West Side. 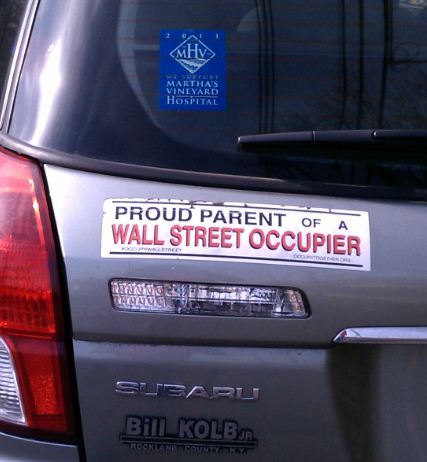 The world does not suffer from a shortage of idiots.

Wow does THAT take me back!

Unfortunately, so does the OWS slur of calling the police “pigs.”

Shades of Sharon Tate and Charles Manson, the SDS, 1968 DNC Convention, the Weathermen……yeah. You get the picture.

“Consider: During the warmest winter in modern memory [but only in a few places in the world, showing how provincial these idiots are], fossil fuel companies cooked up new plans to bake our planet once and for all. Defying public outrage and a presidential rebuff, they laid tar sands pipelines [they missed Obama posing with the pipes]. They imperiled our water supplies with poisonous fracking [in use for sixty years with a sterling safety record]. They went on drilling and spilling oil in our increasingly lifeless seas [WTF?]. And they continued to move whole mountaintops for that supreme carbon bomb: dirty coal [40% of domestic electricity production…until Lisa Jackson’s EPA].

Actually, they are at war with modernity and the Enlightenment.

At war with modernity and Englightenment?

Perhaps the 13th century would be more appropriate; they should move to a country that has Sharia as its guide–like Iran!
(I’m sure the Supreme Leader would love to have them!)

So, the witch-doctor religion of Gorebal Climate Thingy is being beaten back.

Someone needs to get the memo to the Obami…

What will these crazy parents think of next?
*double facepalm*

How much of Martha’s Vineyard Hospital has been funded (and is staffed) by the so-called 1%?

You guys have no sense of irony.

’twill be interesting to see what form the Occupy movement takes next.

That would be Congressman Rush (D, NBPP).

Nah, I meant the fat sweaty junkie with the radio show who can’t get it up and hates women.

Yeah, HE is a slug, indeed. And a real moron, to boot.

Nope…Ed Schultz is happily married and has a son in college. Family values, ya know.

Your guy, Rush, is on his third wife, probably nearing his fourth after this Fluke thing, takes sex trips to the Dominican Republic, hates women, needs Viagra because he is impotent, and fortunately for everybody, is apparently unable to have children, so he is impotent in that way as well.

That’s your conservative hero and the leader of the GOP, and I must say, he is a perfect fit for conservatism.

Oh, and did I forget to mention that your hero Rush is a drug addict…a junkie? In addition to being impotent?

Way to GO…!!! Self-identifying as a moonbat is ONE of trolldom’s greatest foibles.

Tell us; why is Mr. Limbaugh’s personal life so very, very relevant to you? If, say, Soledad O’Brien were found to have birth control pills, would that be any of my business?

Just a thought experiment (and you are excused…for the obvious reasons) for those capable of thinking.

Thank you for helping with the demonstration!

Eh, you started on the personal thing with Ed Schultz.

Sorry if Rush’s personal life is a little messier than that.

I understand that you don’t like facts, reality, reason, and rationality.

But for the family values hypocrites like you, Rush is a perfect symbol….fat, impotent, junkie. Can’t conceive a child, or perhaps no woman wants to have a child with him, hates women, etc.

A perfect symbol of conservatism.

Since you have no counter to that, you attack me. That’s okay….you’re amusing.

Since your hero is an impotent junkie, I suppose you have to cling to whatever you think will work.

Calling me names probably makes you grow a big softie…something Rush can probably appreciate. It’s funny to think of how Rush’s sexual inadequacies are so reflected in conservatism in general.

I’m sure Rick Santorum would have some kind of opinion about that.

Newt would just blame the media.

And Mitt would manage to be pro-softie, pro-Rush, anti-softie, and anti-Rush, all at the same time while saying he wasn’t really taking a position on any of them.

And that’s your candidate.

Rachel Maddow is still on the radio?

“Nope…Ed Schultz is happily married and has a son in college. Family values, ya know.”

Where does domestic violence fit into those “family values”, bud?

What always kills me about you trolls, you have the memory of a goose,

and you figure people cannot read…

“Eh, you started on the personal thing with Ed Schultz.”

Rags, I apologize to you and to everyone else here for taking Rixriver seriously a couple of days ago. Please forgive.

I’d call him a horse’s a$$, but I know a few horses that’d be upset with the comparison; they point out that their a$$ serves a useful purpose.

I’d bet ol’ Rix is a female…certainly no lady.

Just intuition…that kind of vibe in her “nasty”.

You guys have no sense of irony.

I thought it was funny, too. The sticker itself seems to be meant seriously, though, since it includes the Occupiers’ url and hash tag.

HAHAHAHAHAHAhahahahahahahahahaha!!! This is hilarious. (I would like to occupy Martha’s Vineyard – used to go their as a child it’s beautiful.)

Anyone who views their kid’s public display as a disgusting, smelly hippie as an accomplishment of which they can be proud needs a serious wake up call as to the efficacy of their parenting skills.

Now, despite the Martha’s Vineyard tag of elitism, this car can safely drive through an OWS crowd.

“Proud parent of an OWS.”

Glad I can say my parents raised me with principles, and I grew up in the 60’s when it was fashionable to protest.

*sigh* Could this be construed as cruelty to children?

…now we see on the news that it’s all gone to waste.

Just a thought, but usually these kinds of bumper stickers are dedicated to grade schoolers. You know, emotionally and mentally immature kids who depend on their parents for comPlete support

Must be a trader. That’s who occupies Wall Street.

Proud owner of a non-uaw, built in Indiana Subaru!

I mean, come on. Can you imagine a girl screaming,

Ah yes, those Days of Rage, great times; well, except for Memphis and LA, but Chicago, great!

Yep, those ’68 Days of Rage are due for a comeback. Wonder who the OWS folks are volunteering, as in marked for, martyrdom. We know that Charlotte is targeted for the ’12 version of riotous protests and fun campouts, with Sermons delivered from her mount by F. Fox-Piven. One question is what role will Rev. Al and Rev. Jesse fulfill?

What about the “Red Door?” What will it be called this time?

To all the homeless people in NYC:
Follow this car to its home. These people will gladly take you in and support you the rest of your lives.

It is advisable to avoid an armed conflict and recovery control of our government. Then, through the equal application of the rule of law, hold corrupt interests in the private sector accountable for their actions.

That said, cause and effect are not entirely clear in the corruption we have suffered. However, individuals and cooperatives with a granted (by over 300 million people) authority should be considered to be if not instigators, then conspirators in progressive corruption. And with over $15 trillion (in federal debt alone), their role cannot be denied.

Just follow that car home to learn which yard to camp in next summer. East coast vacation near Nyack problem solved!

I suppose it would be unkind to point and laugh at them….

Another reminder that your specialty is law, not math.

If they were at Columbia in ’68, either they are actually Amber’s GRANDparents or Amber is thirty-something and possibly transgendered.