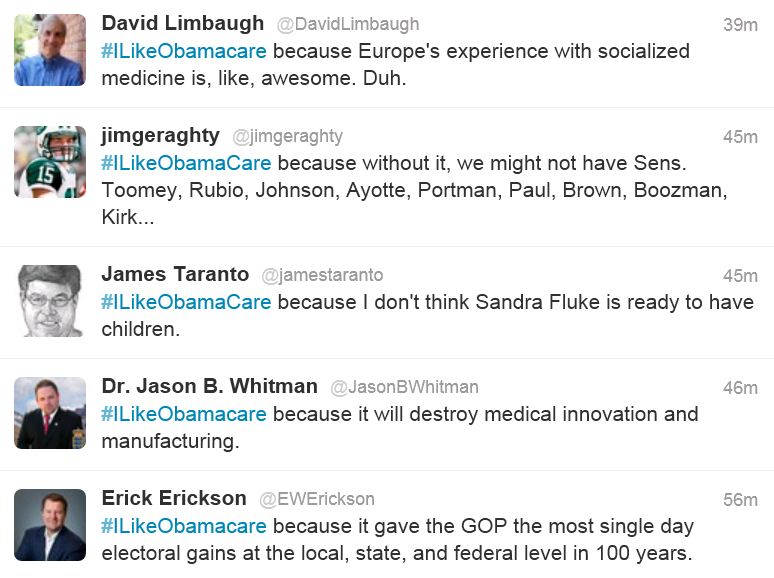 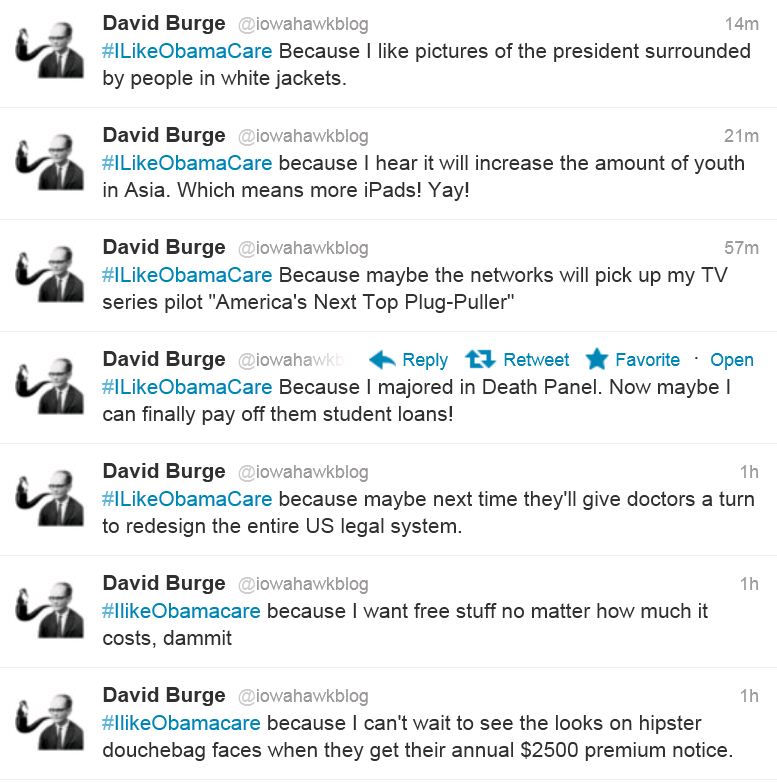 “You have to comment on a horrible crime” (condemning Zimmerman on the Hewitt show).

The guy is completely NOT presidential.

Right along with Bad Luck Barry.

I believe all the candidates spoke on the issue, Santorum also said, “But you know, I think that’s where it has to end, and allow this case to work it out.”

What’s with “Sanct-orum”?
Is this a play on Santorum’s name ie the derogatory term sanctimonious…
The is completely NOT OK to attack Santorum as a religious extremist especially as Christians are on the receiving end of “horrible crimes” ie the Islamist Winter and having religious liberty being trampled in USA.
Look idiot, quit doing the LSM’s job for them.

The irony is incontrovertible proof that there really is a God and that he has a wicked sense of humor.

#ILikeObamaCare is one of the funniest things I have seen in a while! Mockery, they hate it!

Red Ken is still around? Thought he might’ve retired to Gaza.

I wonder if Rick called Mitt and asked if he could borrow his etch-a-sketch..

Did you see where Newt won the Baton Rouge Tea Party Straw Poll? Results were:

Thanks, Maggie. Newt’s also ahead on the fox nation poll Terri linked to last night.
This is from a minute or so ago:

What I don’t understand is why he is not doing better in the polls. Especially against liberal Romney and religious zealot Santorum. Are voters that dim witted?

“This is an unfortunate situation where the President has taken a horrible tragedy, where someone did a heinous act, and that the authorities did not, did another horrible act in not following and prosecuting that to the fullest extent of the law. And then, his, again, politicizing it, this is again not what presidents of the United States do.”

That as Sanct-orum. He’s right about the last part.

The rest shows he’s and idiot.

Gee, Santorum, should we hang the guy tomorrow?
Ever heard of innocent until proven guilty by a court of law?

I agree. The man is as Presidential as Arlen Specter…the mand he supported for re-election.

#ILikeObamaCare because of its purgative affects.

1. In view of Santorum’s attitude toward libertarians in the GOP, I feel no obligation to vote for him in November, but I had to wince listening to him shoot himself in the foot with a machine gun.

2. This was Senator Santorum as I remember him, before he lost his reelection bid by almost twenty points. It felt like he eluded his staff and got to a phone before they could catch him.

3. An amazing thing to me is that the whole point is so obviously not worth getting excited about. Instead of giving it the light, offhanded dismissal it deserved, Santorum turned a ripple in a teapot into a tsunami.

4. Even if I agreed with him on every single issue, I wouldn’t want this guy anywhere near The Button.

#ilikeobamacare because it’s really fun when my husband, a pharmaceutical scientist, keeps getting laid off because the industry is tanking. It’s even more fun to know that millions of people will continue to suffer from chronic and/or life-threatening illnesses which innovations in drugs could treat.

#ilikeobamacare because it’ll be just like Medicare, which denied my father treatment for his cancer despite the fact that he was barely 66 when diagnosed.

#ilikeobamacare because it’ll be fun to travel to Canada England Cuba China for treatment when I can’t get treated here.

Medical device innovations, too, have already been hurt.

We have no idea how immensely costly this outrage will be, all things considered.

#ILikeObamaCare because my 98-year-old grandmother needs a pacemaker and she has a really nice house (wink, wink) #PainPill

Rick Santorum needs to stop engaging in recreational campaigning. It is a sin in the eyes of God.

On NObamacare, Newt has issued a proclamation: Repeal it!

Pops one out of the park – a homer:

Over the fence and out of the park!!! WOOT for Newt!!!

Whoa – Newt hits this one out of sight and into orbit – one of his best – on energy, in-depth…and border control near the end during Q&A :

I had to wait quite a while but my initial postings on Santorum have been validated.

Can you guys get Mr N L Gingrich back up ?

BTW I love the dismissal of Newt’s name by his detractors. I don’t exactly know who he is named after but it can’t be bad to share with a Mega Brainiac.

Newt ain’t out of it by a long way….he will make a comeback when SaraCuda joins forces with him. I would love to hear him say “I am Breitbart”!

when pledged delegates are taken into account, there is not much difference between the three.

Newt’s detractors, particularly Drudge and Coulter have lost all credibility in the eyes of TEA Party/Reagan/Christian conservatives. For Coulter to love Romneycare goes beyond the pale into the realm of noir.

Romney was never credible as a conservative or a person of convictions…or reliability. He has bowed to worse than Saudi kings. He allowed MA to become the petri dish/experimental laboratory for Obama’s radical social and political agendas.

Romney has no convictions or principles he would not abandon for a dollar or a vote.

(FYI – Santorum backed Romney in 2008, said he was very conservative.)

Despite his personal (and now repented, recanted, remedied) sins, Newt is the only one who can handle the putrid mess the Bushes and Clintons and Obama have created.

A repentant, wiser, more intelligent Newt is better than an unrepentant liar, appeaser and facilitator of radical PC liberals, corrupt raider of taxpayer dollars and workers pensions, Romney any day of the week.

“Just so I tell you, there will be more joy in heaven over one sinner who repents than over ninety nine righteous persons who need no repentance.” Luke 15:7

Something big is in play….DeMint has endorsed Romney….wrongly. OUR state overwhelmingly voted for Newt, and he knows it. He wouldn’t “endorse” someone back in January and now, all of a sudden, he jumps up and calls Romney a “good conservative”? I like DeMint, but I think he is protecting the GOP power now as well. I tweeted @jimdemint that there was this group called the “TEA” party and we saw what he said.

Over 700 San Diegans Rallied for Religious Freedom: Elite Media Minimizes. There were over 130 cities that held similar events yesterday. Most of the ones in major cities were attended by 1000 plus people. All were focused on the HHS mandate’s threat to First Amendment Protections.

The elite media has tried to downplay reports with false numbers as questionable polls. However, every Bishop from the nearly 200 Diocese in America has sent a formal letter of protest, and the events brought together people of all faiths and races who know get what an existential threat the administration is.

I don’t think BFD means what Team Obama thinks it means, though.

WTF is their big messaging play.

That Palin lady is a genius at this stuff…!!!

Obamacare is a BFD.

I don’t like Santorum anyway. I don’t think he’s remotely qualified to run this country. The fact that he has stayed in this race so long denying Gingrich the opportunity to flatten Romney shows he is just a narcissist with an overblown ego and unrealistic vision of his capabilities. He’s never done anything remotely close to monumental as Gingrich. How he is getting anyone to support him shows the utter ignorance of the American people.