It just never stops, as reported by Israel Matzav, as this photo is going viral via Twitter but the child was hurt in an accident several years ago, not killed by Israelis, and for the kicker, it was circulated by a U.N. employee: 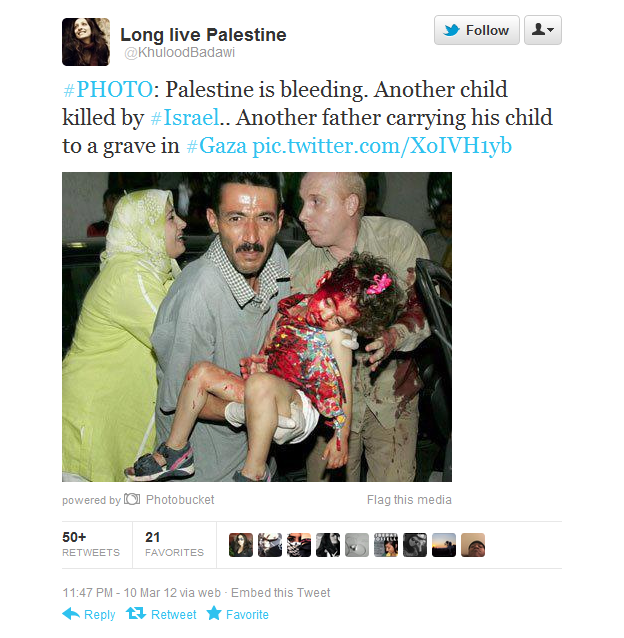 Hey, the UN HAS to be of some use to SOMEBODY…

I mean, besides disease vectors and child rapists.

Evil beyond words to use perpretrate fraud with such a photo.

“Since Friday over 160 rockets have been fired by Islamic terrorists into Israel (at this writing 3pm Israel time 30 have been fired today). Instead of reporting the story as Israel defending herself, the media is creating a false moral equivalency between the missiles fired by Islamic Jihad and Israel’s retaliation. Even worse, some sources are reporting Israel as the aggressor”

Of course Israel is the aggressor. When you use your body and the bodies of your children to interfere with the free and open flight of a Palestinian missile, what else would any liberal call it?

That’s all they do: LIE.
Taquiyya.
When I hear idiots like Carter say that he “believes the Muslim Brotherhood” I just cringe.

I believe that all of these leftist propagandists are just like the nazis.
And they KNOW it.

Hey, I “believes” the Muslim Brotherhood…

All the Collective LIVES by propaganda. They know its power, and made it a science long ago in the USSR and Germany. They perfected it from the Progressive’s example, applying the new technology available.

I believe it’s photoshopped as well.
Garbage like this is put out there for the people whose primary reading material is TV Guide.

On another note, justice for Gilad.

GOT to LOVE smart munitions…!!!

Well, let’s face some grim facts! The Palestinians claim that Israel is harming innocent Palestinians because all the Palestinians want to do is to kill Israelis. Must be the fault of the Israelis that they don’t all roll over and die, die, die!

Now, I realize that I’m at fault for slurring the Palestinians by referring to them by using a slur rather than what they are (Jordanians or just maybe Egyptians, or they could be considered Iraqis too under some circumstances also! Just plain Gaza residents seems so strange too!). Well, they’re correct and so shame on me. I would have used “Pallies” but fear of how the Professor would react prevented that insult from happening.

Still, somehow the concept that the Israelis are to blame because they want to defend themselves seems totally wrong. Not certain why unless it’s the local water up here. Perhaps the concept of self defense is an issue that the UN should take up some time, if there’s ever adequate time leftover after condemning the USA and Israel; oh, that plus praising Presidents Hugo Chavez and Ahmadinejad.

Wonder if bunker-busters should be used by Israel to take out hidden weapons bunkers in Gaza?

Stagecraft … if the Palestinians ever want to get into the cheap horror-film industry … I’d say they have a running start.

Yet another reason to trust the U.N.

The lying has to stop.

A lovely sentiment but we that will never happen so it’s up to those of us who care about the truth to continue to raise our voices to expose these lies whenever and wherever we can.

….we know that will never happen….etc

How is it that, as far as I can tell, the press has not quizzed the Republican presidential contestants on their attitudes toward the U.N.? I suspect that such a question would discriminate Romney from Santorum and Gingrich.

The UNRWA which has provided “services” to the “Palestinians” for over 50 years is shameful and scandalous. It has a vested interest in the “Palestinians” never integrating into Jordan or anywhere else and living forever in refugee camps pending their exercise of the “right of return.”

And we pay for this disgusting bureaucracy!

I remember a few years back seeing on the internet (maybe Jawa) when the Israeli’s were conducting operations in Gaza.

The militants would hide in buildings, camera crew ready-

Then gave young boys large sticks and told them to go to the middle of the street and point out the helicopters to them.

You know the rest….

Still shots where later released by IDF that confirmed-

Think of the Palestinian story — real and manufactured. Don’t be distracted by the UN’s administrative corruption, the crimes against humanity embedded in their policies and committed by their personnel, both uniformed and otherwise. This is exactly the same tactic used by other left-wing cooperatives to deflect review of their operations. Their primary means to solicit funds and support is extortion conducted through appeals to emotion. This is all a product of corruption that seems inevitable in centralized authoritarian constructs.

Is it a coincidence that left-wing philosophy became progressively effective following deposition of the Nazis?

(Godwin’s law only applies when the statement is conjured.)

Why not retwitter with the caption ‘Palestinian family brings girl home after her genital mutilation .

It is under 140 letters & as valid as that caption.

why is the woman in the background smiling?

“Long Live Palestine” – the twitter name says it all.

If her Twitter title was more honest, it would read “You disagree – I Kill you”

DocWahala
“Evil is Evil – no matter how hard the liberal tries to convince you otherwise.”