When it mattered in the period between the South Carolina and Florida primaries, Drudge was all anti-Newt all the time, promoting falsehoods about Newt’s history with Ronald Reagan and assorted other Romney campaign themes.

Now Drudge is being nice to Newt, with this banner linking to a post at HotAir about Newt rising 2% in the latest Gallup survey: 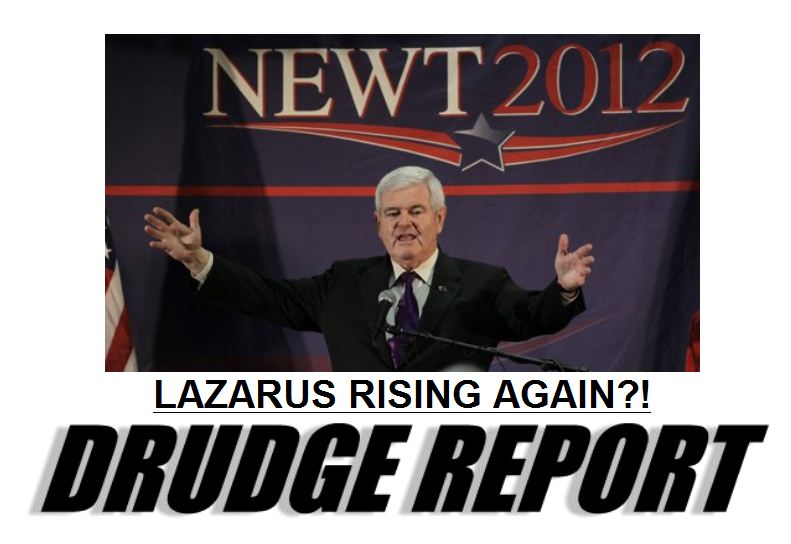 Newt supporters should not embrace this banner or Drudge.

Drudge merely is trying to bring Santorum down and divide the not-Romney field.  If the banner reflected a significant move in the polls, that would be one thing.  Instead, this is a case of Drudge trying to move the polls, not report the polls.

When the time comes, should Lazarus rise a third time, Drudge will be back to reburying him.

Newt has a path to victory, as he explained to Erik Erickson, and it has nothing to do with gift horses from Drudge:

I watched this last night at RedState, there is a part 11 that is supposed to be added today, or either the whole interview today.

UGH!! That should be part II …. should have previewed sorry 😉

Drudge is a jerk.
I still wonder who is paying him to promote Romney.

I saw that story on Drudge last night and followed the link to the original post. Obviously Drudge is just getting things set up so he can knock Newt down again. If you want to get a sense of Newt from a more personal perspective, SF author and physicist Jerry Pournelle wrote some stuff around the time of the Florida attacks at his Chaos Manor blogsite.

On other conservative media news, I saw this posted over at BigGovernment.com:

Andrew was a tremendous cultural warrior, who understood the whole media complex as well as anyone, and worked for Drudge as well as Huffington.

This seems a truly huge loss, and my sympathies to his family and all who were close to him.

I am speechless, I don’t know what to say. This is such a shock and my prayers go out to his family and friends.

Newt rising!! I especially thank @wodiej for sharing all the excellent links on Newt, especially the Newt vs. Santorum video. I think we all need a refresher on 3 years ago, just who was for the TEA Party, who spoke out in support of the people’s REAL movement. That video, combined with this one, make a strong case, IMHO, for supporting Newt over all the others.

I had totally forgotten that Newt was on Hannity, that he was AMONG THE THRONG and in avid, enthusiastic support of the TEA Party movement back then. So much has happened, it is too easy to lose track, to forget.

Sarah Palin and Newt are the only 2 prominent politicians who at that time supported the effort – with enthusiasm!

I am in shock! What a loss! He was truly a fearless warrior. My sympathies to his family.

I’ve had it with Drudge. RIP Andrew.

At least Drudge has taken down the shot with the little stuffed eagle in the foreground . That was despicable.

Agree whole-heartedly with your assessment of Drudge and his tactics, Professor Jacobson.

You are an excellent teacher and a reliable source for the low-down real facts and evidence.

Thus, by simply watching, reading and thinking, we know by now not to trust Drudge, Coulter, Romney and sadly, a good many others.

Are you of the opinion that the Bushes were/are part of the socialist schemes of Obama and Romney?

Drudge has been off my list for awhile now.

He is close to Ann Coulter and Matt Rhoades of the Romney camp. So all Drudge has to do is a little manipulation of Newt and Santorum for everyone to see.

That is very evil and unfair.

It’s sad to see Drudge throw away his audience in favor of whatever benefits he’s getting from the Romney camp. I took him out of my lineup awhile back as well.

Sorry for the OT: Many thanks for blog of the day designation. It means a lot to me.

Especially amazed by this: http://edgeofthesandbox.wordpress.com/2012/02/29/a-warning-from-hillary/

If you thought Ron Paul and Hilary Clinton couldn’t get creepier….

It’s hard, though — with the loss of Andrew Breitbart, such a big, reassuring, heartening blaze of heat and light seems to have gone out of the day.

I know we’ll be ok. And I know that time eventually heals these griefs. But I was looking forward to all that Andrew would do and all he would help us to do to restore our culture. I loved his directness. And his outrage at their smarmy destruction of our culture. What he would say about Hilary and RP in this instance!

I left a comment at the Andrew Breitbart thread. But it’s spilling over here. I miss you, Andrew! Thank you for being you! Thank you for your example! I’m so sorry.

Hope you are right, professor. If not, there are plenty of regional races to get involved with. I worked on a Romney campaign before (MA Senate). Never again.

Ok so I have started almost every day by looking at the DrudgeReport for years and was also a big fan of Ann and stood by her when she said stupid stuff. But both of them have jumped the shark and we need some way to let them know that. So Professor, what can we do to show them that they are losing the true conservatives? Somehow I doubt asking to be removed from Ann’s newsletter will matter much, unless a lot of us do at once.

Remember when Rick got upset because Newt wanted him to drop out, well now Santorum is doing the same thing, after I remember he said he would never ask anyone to drop out, – I guess he meant he wouldn’t do it personally, he’d get one of his staff to do it:

R.I.P. Andrew, as with all great soldiers, we will learn more about you and your vision -on where we are as a nation and where we can be and how to fight the left distortion- after death. Although you were very vocal in the fight and did your best to get your message out there,(thank god many were listening), death will now sensationalize you so your message is even louder. For those of us who now mourn you, that is the only bright light we can see. You will be truly missed.

As for Drudge, Newt will take any good media he can get right now, and RASMUSSEN just showed Santorum taking a huge plunge downward Nationally. Santorums people are out there begging for Newt to step down. Sorry, Newt tried to get you to see the forest thru the trees long ago, Ricky you should have taken the olive branch like Huckabee & McCain did. Romney would be gone right now and Ricky & Gingrich would be duking it out for Super Tues. But, Ricky being the smug and overconfident prick he is said no. Ricky knew he couldn’t bear Gingrich 1 on 1, still can’t. Now that Santorum blew his $ wad in Michigan, hope the 12 delegates were worth it, HE BETTER START BEGGING FOR MONEY FROM HIS MILLIONAIRE PAC FRIENDS. Ricky the boat just started leaking and you should have put on a Lifevest instead of that sweatervest you so love.

I don’t trust poll numbers but look at them as trends and it
proves how volatile this race still is and that people have not settled on one candidate yet.

DINO – thank you so much – that video made my day, hope it goes viral or is being played non-stop in all Super Tues. states.

Say What – Agree with you on Natl. polls, but gotta say the polls 1 day before voting usually are pretty close.

Yep, those day before polls are the only ones I pay attention to because that’s the only day that pollsters use to tell people how accurate they are!

Sheriff Joe had an interesting press conference today regarding O’s birth certificate. I am not a birther but his special posse put together some compelling stuff.

This is a link to videos of his evidence:
http://www.westernjournalism.com/

I came away thinking maybe he is on to something.

The Hill is reporting that GOP took away one of Santorums Michigan delegates and gave it to Romney – now it is 16 – 14:

I used to have Drudge in a prestigious position on my Favorites Bar for a daily surf, along with Hot Air, Legal Insurrection, and Michelle Malkin. But, when he started that “Trash Newt” campaign, I deleted him, and I haven’t been back. I don’t mind bloggers who state an opinion and PROMOTE one of the candidates, even if it isn’t my favorite candidate; but an all-out smear campaign AGAINST one of the candidates, without coming out and admitting it for what it was, seemed too much like the dishonesty we get out of the mainstream media. I don’t need or want anymore of that. Ta-ta, traitor.