It’s almost over (Update: It’s over)

It’s almost over (Update: It’s over)

Update 3-22-2012:  The Toulouse killer was killed in a police raid overnight:

Police stormed the flat where Mohammed Merah was holed up at 09:30 GMT, after a siege that had lasted 32 hours.

Merah fired at officers and was found dead after jumping from a window.

Reports of an assault on the Toulouse gunman seem premature.  As of this writing the latest report is that various explosions were only to “intimidate” the gunman.  I’ll post updates when more is known.  Isn’t this taking a little too long? 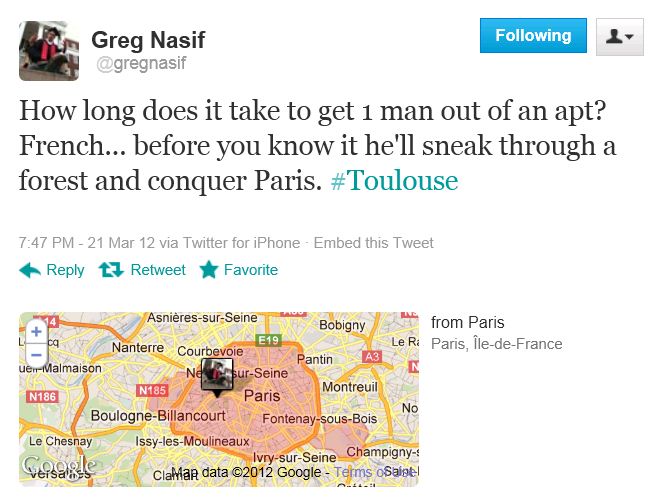 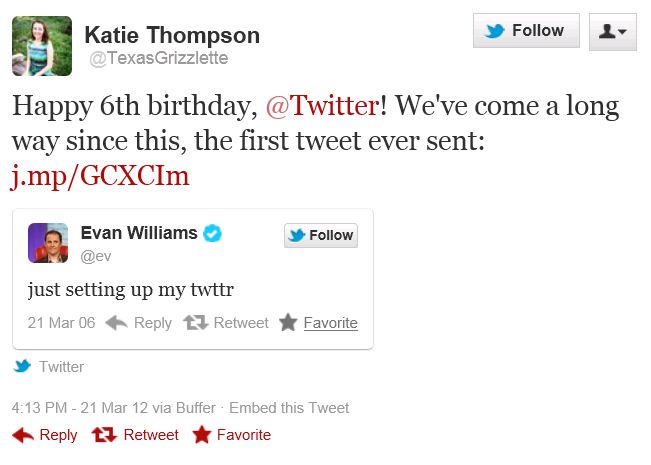 FTA: “What is usually a night of food and drink for a good cause was, regrettably, marred by an appalling few moments,” said Hanks, who is a prominent supporter of President Barack Obama.

If you look at the video, he sure looks appalled. [sarcasm off]

I worked in Hollywood for five years. If you knew the kinds of racist, hateful stuff these people say behind other people’s backs, you’d never watch another movie again as long as you live.

The most blatantly bigoted people I know are Collectivists. No Conservatives of my circle speak or think like that.

You know why the French army issues steel-toed boots…right???

This is like ordering a slice of pizza in Paris. Waiting time is way..too…long.

Kinzinger should be careful, lest one day he’s the Manzullo of the next generation.

The French are still negotiating their terms of surrender-

Congress Spinelessly Hands Over Power to the American Caligula: President sends money to Egyptian military that Congress denies. The only thing missing is the Horse Senator.

Well, you’ve got Lindsay Graham, the Reptile Senator. Will he do?

Toulouse: 300 police surround the residence of one 23-year-old.

…had been under surveillance by French intelligence for years…

…had “already committed certain infractions, some with violence…

…went to Afghanistan two years ago.

The French are waiting for the Marines to arrive?

“The French are waiting for the Marines to arrive?”

Send in the Romney-bot. It’s got combat experience with bicycles and religious pamphletting, and special training in dog-on-roof transport.

With its superpower of being on every side of everything, the shooter won’t know where to aim.

Once inside the house, Romney-bot can use its main weapon and bury the perp in a suffocating pile of money.

I always enjoy reading wretchard over at Belmont Club, but this time he surprised with the video accompanying the piece. I was enthralled by BD singing “Tamborine Man” – but I expected “Things They Are A-Changin’” or “I Fought The Law.“

As my husband said, the Al Qaeda gunman is waiting for the French to surrender.

The ambitions of Islamic imperialism were tempered by the successful counter-offensive waged by Europeans (and Soviets), and defensive efforts of Indians, Chinese, etc. that held their ground. The Muslims have never forgiven their competing interests for resisting change. It must truly gall them that their most recent united front against a fledgling Jewish state was repelled and crushed.

Can’t help but notice the stereotypes for the French here. I believe France has been very generous in spirit & kind to America. If you had listened to them about Vietnam you might have 50,000 men + descendants . That could be an extra 250,000 citizens.

reports were that he is armed with weapons including an Uzi 9mm submachine gun. Apparently he said his car was stacked with weapons & this has been confirmed.

I don’t know what kind of action you want – what is wrong with waiting him out ? Cut the water supply off power heating .

The latest update I read in the British news is that he might not be alive.

Yes I know 4/7 victims were Jewish but they are all 7 French & not really anything to do with you.

French victory! The opposition army jumps to his death.

Steyn, as usual, gets it exactly right.

Mohammed Merah vowed to ‘bring France to its knees’
Islamic extremist killed seven people, including 3 children and a rabbi, in France before dying in standoff with police

[snip]
Neighbors told Le Figaro newspaper that Merah was a “quiet man” who had “never done anything special.”

Merah reportedly made several trips to Pakistan and Afghanistan, where he allegedly escaped jail, the director of Kandahar prison, Gulam Farooq, told the BBC.

Farooq said the gunman was sentenced to three years for carrying bomb-making equipment and was one of several hundreds prisoners who escaped during a Taliban assault on the detention facility.

Obama Admin duped into negotiations with Grocer from Pakistan portraying himself as a Taliban Leader.
The Grocer was paid tens of thousands of dollars as incentive to participate.

I thought the French would surrender…. hell the last time they had any success in a military conflict was against Green Peace when they sank the Rainbow Warrior in Sidney harbor

Hehe – You might want to get a few facts right.

Sydney is not spelt Sidney.