Carbonite dropped its high-profile sponsorship of Rush Limbaugh because of a single incident last week in which Rush used certain words in describing Sandra Fluke, for which Rush apologized in writing on Saturday and on the air on Monday.

Yet Carbonite retains sponsorship of others who have made personal attacks and insults a part of their programs.

In a February 27, 2012 SEC filing, Carbonite listed its “trusted spokespersons.” 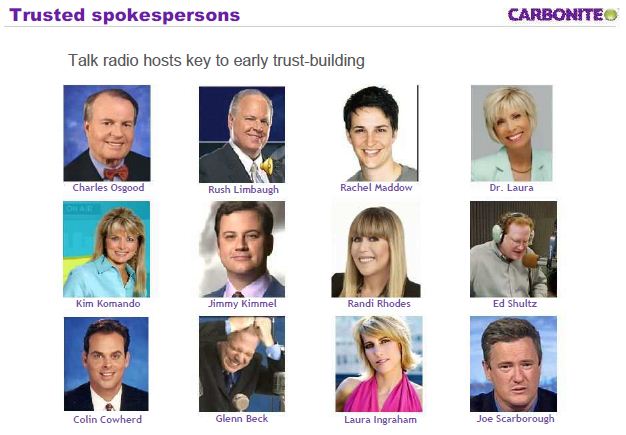 I’ve already posted links to the unhinged rants of Ed Schultz directed at conservatives.  These outbursts are consistent and well known.

Maddow, while not as excitable as Schultz, has a long history of mocking of  Tea Party members as “teabaggers,” a play on a sexual act:

Rhodes has a long history of attacking others, including suggesting that Sarah Palin needed to be kept away from teenage boys, and calling Hillary Clinton a whore (for which she received a suspension from Air America).

I don’t think Schultz, Maddow or Rhodes should be dropped by Carbonite.

But before Carbonite’s CEO David Friend gave into pressure and dropped Rush on a Saturday night after Rush had apologized,  Friend should have considered whether he was harming Carbonite’s credibility by publicly asserting that Carbonite wanted a “more civilized public discourse.”

Why so Paranoid, Mr. Mahar? Online conservatives kryptonite to Carbonite? Got ya down and a little Paranoid? Never Mind the Bloggers, Here’s The Dickies!

The greatest cover of all time.

IF I wanted someone NEVER to hear of my product, I’d advertise on BSNBC.

I wonder if Iran publishes their latest nuclear advances on the MadCow show…???

“I wonder if Iran publishes their latest nuclear advances on the MadCow show…???”

No accpetable way to know that I can think of.

Vote in this St. Louis Poll- they’re asking if the radio station should get rid of Rush.

Oh I’m quite sure it never crossed Mr. Friend’s mind that he might be harming Carbonite’s credibility by looking like a good Liberal and trying to placate the social circles that he runs in. What’s more, now EVERYBODY knows that he’s a big Media Matters supporter and will take every one of his future pronouncements with a boulder of salt.

Now his company will be paying the price for that arrogance, and he might have to answer a shareholder suit for breach of fiduciary duty (which will likely fail, but still be annoying). I’m sure a bunch of those “institutional” shareholders are going to be looking for any way they can get to say “you made a non-business decision that hurt OUR investment. Pay up.” I have no knowledge of such a suit being prepared, but it might survive a “business judgement” challenge given Mr. Friend’s statements as to his personal motives behind the decision.

I think a lawsuit against the company will fail, but angry letters to the Directors might have even greater impact. Since SarBox, directors of public companies are very skittish and stockholder anger (particularly of large institutions) will be paid a lot of attention.

Is Mitt in this race to make sure Obama gets reelected? Because the man can’t possibly be this stupid.

To the knife fight, he’s brought a limp noodle.

In the past few days we have learned that Carbonite is managed by leftists.
Money they recieve for managing the company is donated to leftist causes and politicians.
Why send money to any individual or group that finances your enemies?
There are many other good companies that provide online backup, find one that is apolitical and support it.
Fighting back is good.
Respect is a valuable commodity.

From what I’ve read, Progressive Insurance is the same way.

You’ve read correctly; Progressive Insurance is run by Peter Lewis who is almost as prominent in financing lefty causes as Soros.

I heard it was bad but I didn’t think it was that bad.

The “Teabagger” smear is by far the most egregious.

Obama himself has used the term on national TV.

I’d like to see a reporter ask Obama to explain to the American people exactly what the act of teabagging entails. When he balks at this, follow up by asking why he, as President, felt comfortable smearing tens of millions of patriotic Americans with such a vile term.

From Jay Nordlinger of National Review Online (entitled “Rise of an Epithet: ‘Teabagger’ and what to do”)

“The first big day for this movement was Tax Day, April 15. And organizers had a gimmick. They asked people to send a tea bag to the Oval Office. One of the exhortations was “Tea Bag the Fools in D.C.” A protester was spotted with a sign saying, “Tea Bag the Liberal Dems Before They Tea Bag You.” So, conservatives started it: started with this terminology. But others ran with it and ran with it.”

Teapartiers have no one to blame but themselves for that “teabagger” title.

Yes, those darn TEA party folks…imagine their foolishness at not keeping up with the vulgarities so popular in today’s enlightened society.

I must blame someone else for my bad behavior.

The beauty of the situation is that the free market wins against leftist ideology (if we are patient). Rush holds all of the capitalist cards – his huge audience that actually financially supports the advertisers. These “trusted spokespersons” (oh the hypocrisy!)do not have the audience size or loyalty of Rush’s fans. It will be fun to watch the various holier-than-thou, politically correct advertisers come back and try to advertise with Rush again. I hope he charges an inflated rate.

“I hope he charges an inflated rate.”

1. I don’t think Limbaugh should have called Fluke what he did. (Yes, he apologized.) I also don’t think the MSM should actively try to stampede advertisers away from Limbaugh, but I suspect that that’s exactly what is happening.

2. Not sure what the proper descriptor of Fluke is. ‘Saboteur’ covers some of the ground. Maybe the language needs a new eponym.

3. However, IMO ‘prostitute’ and ‘slut’ are spot-on wrt the CEOs who caved to leftist pressure and dropped Limbaugh.

OK, so the dog jumped back a bit when his nose got shocked.

How about this: Hey dog, if you drop advertising on all the lefty shows, I’ll start buying stuff from you.

Will the dog drool?

BRIETBART: Now, MORE POWERFUL than anyone can possibly imagine!Many citizens are motivated to push back on Team Obama and his cultural Stormtroopers: This includes a Hollywood producer and a freelance journalist giving “Managing Media” lessons. It also includes a description of the Professor’s good work on Carbonite.

THOUGHT: When will we see Obama host a Beer Summit for Limbaugh, Fluke, Biden and himself????

From what I can see the kind of lefties who campaigned to remove Limbaugh from the air are not buying much of what ProFlowers and Carbonite are selling. I expect those corporate sharpies are seeing that.

First they came for the . . .What should happen is that every single person on the right who advertises these companies should DROP THEM and make deals with their competitors. This would send a very strong message to keep their ideological powder dry moving forward. As their customer base dwindles and they start begging to advertise again tell them not just NO but HECK NO! Ingraham, Beck, Scarbourough. . .grow a pair and boycott the boycotters. Otherwise you are giving them a weapon to use against you next. And, in the meantime, you are funding leftist programs. I’m not suggesting for hosts on the Right to subject potential advertisers to ideological litmus tests as a matter of course but these companies are scoring points against your compatriots. Make them pay for the privilege. Barracuda Online Backup would no doubt cut you an advertising deal to take Carbonite’s business. BloomsToday would like to have Pro Flowers business, I’m sure. C’mon, make this happen!

It’s life in the liberal bubble “I don’t know one person who voted for Richard Nixon!” (Which, of course, tells us more about who the speaker of this knows and doesn’t know than about Richard Nixon). Ideological horseblinds.

It cripples a journalist’s credibility, but a poor credibility is no longer detrimental to one’s career among today’s media frontliners. They have no corrective negative consequence for it. Indeed, it is frequently the pathway to fame and fortune. An inability or refusal to respect facts is foundational to a successful career among the usual media suspects.

Operating from within the liberal bubble has worse and more immediate negative consequences in the business market. Lose grip of the public relations aspect and you can undo decades of promotion and market gain with a single boneheaded move, and in the Carbonite case, due simply to living in a bubble where one cannot imagine another disagreeing with you. Right, Carbonite CEO David Friend? Having fun explaining yourself and your nosediving stocks to your major shareholders? Do you hear the cries of the gathering peasants yet? Hear the clink and clang of their pitchforks? Hahahahahaha. Dumbass.

In their TOS, Carbonite advises maintaining a secondary back up in case they decide to suddenly terminate your account.

So why would anyone trust all of their back up files to a company whose leadership is so fickle and easily led?

For this kind of service, I would think one would want very boring, staid, precision-oriented leadership that shows public passion for only one single subject: the permanent integrity and privacy of databases.

Was planning to subscribe to Carbonite, but since your company continues to endorse and advertise on the Rachel Maddow Show, the Ed Schultz Show and the Randi Rhodes shows and have them listed as trusted spokespersons, none of my 4 computers will ever be using your company.

In my cancel email to Carbonite I listed among several reasons my unwillingness to trust my financial and personal data to a company so easily manipulated from the outside.

Professor Jacobson is doing a fantastic job covering this…

Carbonite is now — and always has been — losing money hand-over-fist at the rate of $20+ million per year.

The company has an “accumulated deficit” (accountant-speak for “cumulative loss”) of $100 million.

Carbonite was rescued from insolvency by an IPO last summer.

Losing its Rush-relationship will leave it ever more vulnerable to the growing competition.

Beam me up, Mr. Speaker! … Carbonite’s kamikaze CEO has effectively cut his own throat to protest Limbaugh’s jokes about Sandra Fluke’s crusade to compel other people to pay for her and other Georgetown Law students’ birth control!