This analysis by Topsy Analytics show the volume of tweets using the two most popular hasttags for the various boycott Rush groups, #StopRush and #BoycottRush.

What it shows is that activity peaked from Friday, March 2 – Monday, March 5. There still is activity, but nothing like what was sustained during the initial push: 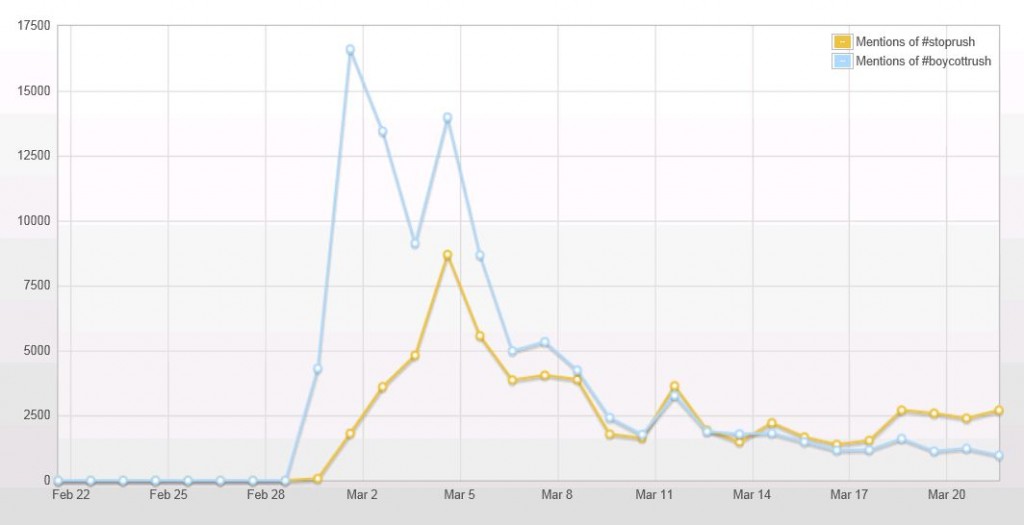 The usefulness of Twitter bombing of advertisers played out once the low hanging fruit had been picked off.

Now the battle has moved more into a war of attrition, with Media Matters seeking a re-run of the StopBeck movement, slowingly grinding down advertisers one at a time, local radio station by local radio station.  We’ve all now heard about Media Matters’ $100,000 ad buy to support local advertiser boycotts, and there are other efforts like what is playing out in Burlington, VT (h/t commenter chilipalmer):

“When Rush said these terrible things we did not get one phone call, one email. They did not hear it. They read about it,” he said about the protest.

He said somebody sent an email with a script telling protesters what to say.

“Many of them said the exact same words,” he said.

As station owner, Goldman said he heard from almost 30 people objecting to Limbaugh’s remarks, but he also got a similar number from those believing in the right of free speech….

Goldman said it was clear to him the complainants have not listened to WVMT.

“They are not consumers,” he said.

The question is, can Media Matters and other Rush boycott groups sustain the effort this time?  Or will the success rate more resemble the Twitter bombing campaign chart?

Mark Twain said it best – there are “Lies, damned lies and statistics”

Media Matters has most of what it stood to gain by the boycott, namely a gage for the size of its following, notoriety, and a whole mess of talking heads indebted to them for subject matter.

I’ve paid a little more attention to Rush’s show lately, it is stuffed with advertising.

Paradoxically, Maher’s self-serving “can’t we all just get along” has taken a lot of the outrageously outraged energy out of the Media Mutters effort.

Plus, it is being correctly and successfully depicted as a censorship campaign by a tiny group of haters.

OK guys, tomorrow we are going to commit some serious violations of morality

Off topic, but…no he DID NOT….

“I am glad that not only is the Justice Department is looking into this, but the Governor of the State of Florida has put together a task force [to investigate the case],” Obama said. Obama carefully avoided any discussion of George Zimmerman, the man who shot Martin, and has controversially avoided arrest under Florida’s “Stand Your Ground” self-defense laws.

Obama did say there is a need to “examine the laws” surrounding the incident, as well as the incident itself.

“My main message is to the parents: If I had a son he’d look like Trayvon…

“can Media Matters and other Rush boycott groups sustain the effort this time? ”

It would be nice to have hard evidence to send to the targeted advertisers, showing that they are the target of a small radical group, for one thing.

Secondly, demonstrating that yielding to a small group of radicals actually hurts their marketing, as it associates their brand with the radicals.

Carbonite is now known for having a Media Matters sympathetic CEO. It seems like their brand was harmed by that. Any smart marketing people will realize this. The Amex person seemed to get it.

It doesn’t appear the twitter strategy will continue to work, except when major media gets a piece of red meat to throw out, like the Rush comment. But these Twitter activists are now recognized as the phony outrage flamers they are.

I got a rather nice response from one of the emails I send the targeted stations yesterday.

From the content, they DO get what this is, and who’s behind it.

Great information, thanks! Listening to the Rush show right now.

Dang it, Rush is only up to 159,000 followers. He only doubled his number in a week.
How disappointing.
heh heh.

What? I thought Rush had audience of 20 million? Of course, there are no hard numbers to back that up either.