The President and the Democrats are indeed doing very well at the outset of 2012, and the Republicans are doing pitifully. They are not unrelated. Republicans in Congress and in the primary battles are driving independents into the Democrats’ camp and consolidating and energizing parts of the progressive base. There is improved optimism about the macro economy and the President’s approval rating is up to 50 percent.

But Democrats should keep their wits. Nearly all the gains have been produced by the Republican slide, not Democratic gains. Both parties and politicians are reviled. And most important, the voter has not seen personal economic gains and Democrats are no more trusted on handling the economy – the heart of this election. Some of the emerging Democratic messages are on target, but others miss what is really happening and pose considerable risks. The on-target messages set up an effective electoral choice around the middle class, but the off-target ones could give the Republican nominee a platform for challenging the President’s economic record.

Voters are still very negative about the economy and their lives and a large majority of 56 percent want a change of economic direction.

Notice how, unlike that other chart of the insane brain, a key measure in the Greenberg survey consistently shows that since September 2009 voters trust Republicans more on the economy, without frequent and dramatic shifts: 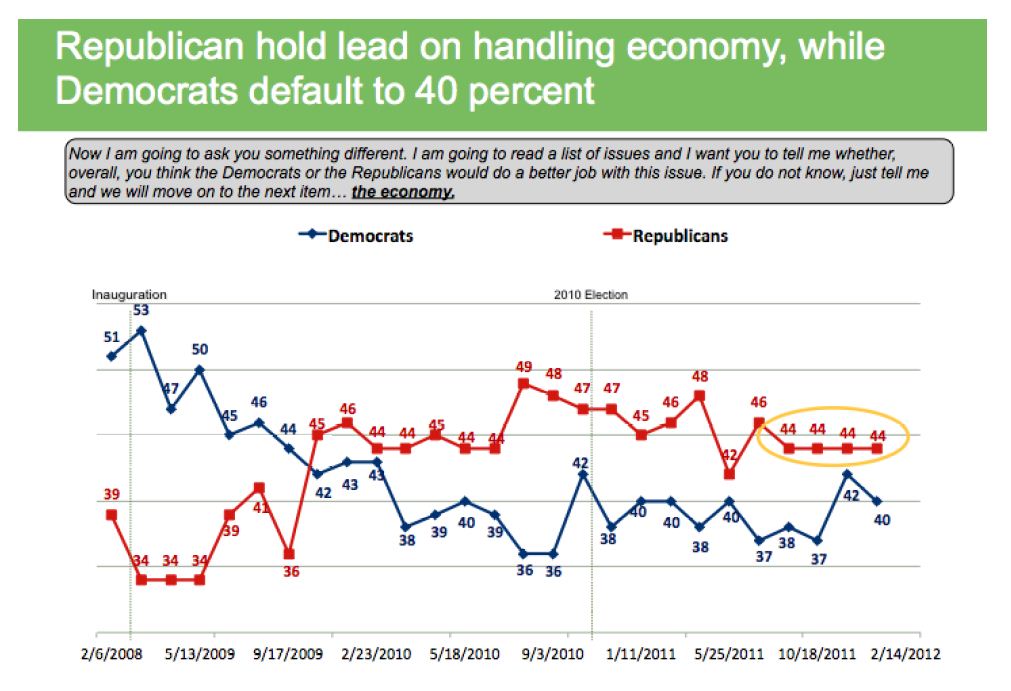 In the surest sign of sanity, almost no one is buying Obama’s State of the Union message that “America is back”:

Sanity and hope.  Nice for a Friday.

To which we apply Palin’s messaging genius…

I’m “licking my chops” to see/make/help with that commercial for the general.

“Both parties and politicians are reviled.”

And voters have good reason.

It’s pathetic that this type of statement from a pollster should be used to give either party comfort rather than concern.

If Gallop’s prediction of a rise to 9% in unemployment figures for February rings true, look for that graph to really distort.

$4 per gallon gas, uncertainty in the Iran issue can only add to this effect.

Now. Have you had a chance to watch this video on how we will restore the economy?

NEWT: “AMERICAN ENERGY, MONEY IN YOUR POCKET, YOUR FUTURE” https://legalinsurrection.com/2012/02/28-minutes-to-energy-independence/#comments – 28:59 – your prosperous tomorrow

Less than a half hour of your time to see how we will do it. And then the USA doesn’t have to have a complete economic collapse! Yeah!