I’m feeling better right now than I did last night. 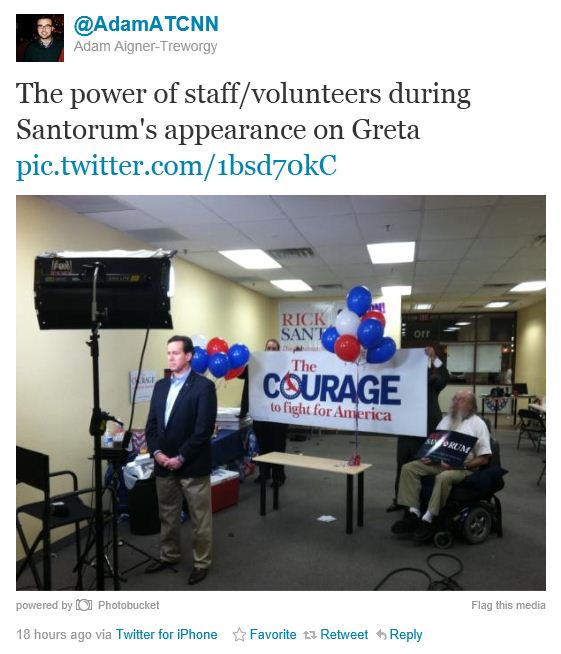 If Mitt Romney is the best we conservatives can do, maybe the country deserves more BHO!

[quote]I’m not saying Santorum can’t win it, I’m just saying that his momentum may not be what it seems:[/quote]

Momentum isn’t up to the candidate, though. It’s up to the people. If it were up to lil ole me, he’d have it. Big.

Erick Erickson’s piece about Romney’s continuing deep dig and National Review’s editorial problem is one of the best satire pieces of this political season.

That WOULD make a good Drudge headline. But I think Peyton Manning has a better chance of winning the Superbowl Sunday than that happening.

The photo makes me wonder who on earth is donating money to Rick Santorum. On the one hand, I would say, “what courage!” But then I remember that he is acting as the spoiler for Newt. and for us.

When did the primary and or third-party candidate spoiler phenomenon start?

John Anderson in 1980, but he failed to stop Reagan.
Ross Perot gave us Clinton.
Then Bob Dole gave us more Clinton.
Then G.W. Bush and McCain gave us Obama.
Did Huckabee give ups McCain instead of Romney in 2008?
I don’t think it wold have mattered. I do not think Romney can win the general election, then or now.
Did Edwards give the Democrats Obama instead of Hilary?

This feels like the money guys are just determined to run the country and us into poverty while they get rich and stay rich.

I’m all in favor of everyone being rich. But this is not fair. And they are subverting our process.

Part of this is because of campaign finance laws. I am totally, just totally, fed up with the establishment ruling class.

He should have said it better, but Romney is correct. It is essential that the middle class’s prosperity, confidence, and belief in the status quo’s legitimacy be restored.

And what better way to support the middle class than with the individual mandate, cap & trade, automatic increases in the minimum wage and other Romney hits.

My post said nothing about the individual mandate, cap & trade, and automatic increases in the minimum wage. In fact, I do not suppport Romney; I am wobbly for Gingrich.

None of which prevents me from acknowledging that Romney’s emphasis on the middle class is proper. I do not define my position on a given issue according to Whose side are you on?

No, the entire premise is just F*ing nonsense and he would have been better never opening his mouth. Helping the “Middle Class” is a Communist/Anarchist way of trying to divide the people dating back well over 200 years. It’s what spawned the French Revolution and fuels the Communist, Democrat/Liberal and Union (but I repeat myself) rants against “the Rich” today

BTW, if you make more then 115K, you are in the top 10% of all wage earners. You should be able to quickly figure out about what the true Middle Class is, and figure out their percentage of wage earners, off those numbers; at which point you will realize how clueless he really is…

Ultimately, he is doing absolutely nothing more then trying to give Union talking-points, with a lack of understanding of any side of the actual issue. What he ironically doesn’t do is propose actual ideas to help “them”

Meanwhile, the Tax Policy Center says that people making 40K or under would see their taxes increase under his tax plan. He also wants a higher minimum wage, which will limit job opportunities for low income employees, and he wants all “free riders” to buy their own health insurance (or be subject to a “fine” if you don’t – like he showed in MA, and repeatedly defended since). Oh, but don’t worry, he is going to give “Free Capital Gains” to those under 200K because that’s bound to make a huge difference to all of, well, next to no one really.

So, the 50% who make under 33K are going to be hurt under Romney, while the 40% or so that might qualify under a fairly liberal definition of “middle class” will be hurt as well. Meanwhile, those in the top 10% are going to be…? Well, he seems to be against them too based off prior statements.

Mitt Romney is just clueless, all around, on everything it seems; and much like his time in MA is apparently going to try to hurt all classes across the board in an effort to stifle economy growth, job creation and business advancement. And how is he going to try and gain the power to do all that? Haphazardly pick up the Class Warfare tactics of the Left and run with it…

A good Scotch is an amazing thing!

Just had one last night after the FL returns. To quote a song, “I’ve become comfortably numb.”

Romney, the screaming anachronism. His buttons and bumper stickers should read “Romney ’72”. Or “Romney/Agnew.” Is old Spiro still around? Would he give it one more shot, for the team?

Romney is the embodiment of everything we don’t need and shouldn’t have in a candidate. EVERYTHING.

You can’t tell me this isn’t intentional, in a Freudian sense.

Dr. K tonight, paraphrased: “Romney is not fluent in the language of conservatism.”

To say the least. Romney knows Klingon better than conservatism.

I tried to get the tag “Stepford Candidate” to stick to Romney, but the Stepford franchise of movies is too old. I think I’ll try a new one, reflective of Romney’s hardnosed, to-the-bone conservatism and personal toughness:

I forwarded that PDF about Romneycare to five people. 3 of them have already responded with WTF responses. One of them is now going to vote Newt.

Everyone here should send that PDF out.
Let the truth rein.

This should help lighten your evening: Apparently Gingrich has gone after the RNC and Florida to have its delegates divided proportionately because the election was held prior to April 1, before which the winner-take-all result was not to take effect.

Poor Mitt Romney is becoming his own Joe Biden.

That was my thought too … and if I vote for him, and he wins, am I going to have to spend the next four years defending him from his missteps?

I got this from a someone over at The Right Scoop:

Blutarski: Over? Did you say over? NOTHING is over until WE decide it is! Was it over when Romney carpet bombed SC? HELL NO!”

I guess “Let them eat cake,” was copyrighted…

“I’m feeling better right now than I did last night.”

LukeHandCool (who is anything but OK these days … but who remembers fondly the Saturday night in early 1978 on the Sunset Strip when he first experienced Dickies-mania. The Dickies blew away the main act … Britain’s The Jam … and are forever the pride of the San Fernando Valley … the place that also gave us valley-girl talk).

Yeah, so the Donald proves he’s an idiot and a political opportunist once again. Donald’s endorsement may end up hurting Newt.

Yeah, that’s right.
A populist like Donald Trump is going to HURT Gingrich.
You are not very bright.

Also The Donald and his friends – in gambling, real estate, construction, hospitality – might throw more than a little campaign cash Newts way.

re: “I Feel Good”
I knew that you would

thinks that someone should devise a special glance emoticon for when Mittens steps on his mouth. Save em up and release them as Mitt’s Hits v.1,2,3 whatever. Why tip him off so that he can try to be more careful? There again, now we know (for sure) why he avoided the media for so long.

I never imagined that I would agree with Andrew sullivan about anything!

Romney said that Obama trampled on religious freedom. As Governor of MA, Romney DID THE EXACT SAME THING re: the morning after pill. No conscience exemption and he required Catholic hospitals to provide it. Why doesn’t anyone ever call him on this?

More to the point: what does it say about his character that he can so easily assail someone viciously for doing something he has done in the past. There’s something chilling about his utter disregard for truth. He’s famous for saying that corporations are people. But what he suggests to me is living proof that a person can be as soulless as a corporation.

A Mitt Romney nomination will make the GOP a party that gave up its principles in its lust for power. It will end up with neither.

Well, actually, my gift is my incredible good looks, best looking man in North Carolina*, but thanks!

The Drudge headline got me.
LI more thought provoking and fun.
Thank you Professor!
My first stop favorite every day.
No longer visit Drudge either.

That picture of Santorum says a thousand words, but none of those words are “winner.”