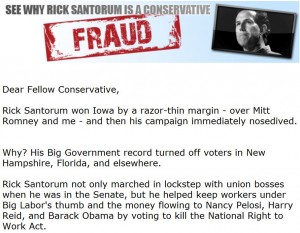 Wow, Rick Perry will you come back into the race please? Thanks Michelle Bachmann for your Gardisil assasination of a credible candidate.

“against Mitt. What’s wrong with the nutjobs on the right? The loons at NRO were gushing for Mitt in 2008, and now he is persona non-grata all b/c he lost friggin Colorado. Our best shot to beat O is clearly Mitt, journalists know this, O knows this, and pols know this. Santorum is animated by one issue – stopping women from having abortions – do these idiots at NRO not know that is not a winning issue in a national election? I don’t see how Mitt escapes from the pincer between the nuts on the right and the journos/dems on the left. He should just break to to the left this afternoon and tell these nuts f u, get an effing job for a living.”
_______________________________________________________
The person’s attitude is indistinguishable from Obama’s attitude. I was surprised!!! Surprised I tell you to find it was a Mittens supporter who wrote this!!!!

I mean a Mittens supporter asking Mittens to break to the LEFT. UNBELIEVABLE!

In all seriousness now, what is the difference between Obama and Mittens supporters?

“In all seriousness now, what is the difference between Obama and Mittens supporters?”

Obama supporters are honest enough to call themselves Liberal – Romney supporters either lie to hide that fact, or are those who wouldn’t know a Liberal if they saw one.

Huckabee was never a credible threat to McCain. I’d run from that comparison if I were Santorum.

Congratulations on the CPAC award, Professor. It is well-deserved and I hope this blog will not be “underrated” for long.

Currently watching Newt’s speech at CPAC. I still believe he is the best we’ve got running. He has ideas and fire and convictions. The other candidates seem to be lacking one or more of these qualities. The audience is responding well. I will continue to support him with money and time as I am able. In my view, no one else can beat Obama.

Who would want to assasinate me? My people love me, they get free health care and contraception!!
Shout out to my comrade in the White House.

Yes dear leader, but the contraception thingy would be better if it did not include contracepting us even when we are in our 20’s and 30’s.

The Allen West speech at CPAC (linked above) is one of the best explanations of Conservatism I have ever heard. Unbelievable. It’s like Reagan’s “A Time for Choosing” but given with the fervor of an evangelist.

I mean at Some Point you’ve had enough food, so my speech “A Time for Famine” explains that.

I thought you lived up to your name “un” in a Chinese hotel today?

Back in the early 90s when CDs were still pretty new and the Internet hadn’t yet brought world-wide shopping to everyone’s fingertips, The Teacher was my obsession. I searched for a Tull album with this song for well over a year. (stupid US release vs. UK release variations!) Had to, was wearing out my Vinyl.

Amazon has it. Benefit album (CD)

Thanks for the link to Allen West’s speech-

I thought I had it recorded, but apparently the DVR doesn’t know when CPAC starts or ends-

Interesting observation that suits the infantry mentality of what Newt’s daughter had pointed out about her father – you’re in it for the long haul:

“It has been reported at The Ulstermann Report and elsewhere that the our current White House occupant is quite the opposite. He often doesn’t begin his day until 10:30 am and quits at 4 pm. Both, equally disastrous.

Which leads me to speculate about the management styles of our current Presidential nominees. We have a pretty good track record from which to judge two of the candidates. Romney clearly has had a professional work ethic as a Venture Capitalist, Olympic Turn Around Specialist, and Governor. Gingrich was planning the strategy and operational reform of Congress 14 years prior to actually taking it over. In fact, he had already assigned legislation authoring to lame duck committees upon the GOP victory so that they could begin passing 9 major legislative reforms the first day. Both of these seem more than competent in this regard.

We really don’t have much to go on with Paul or Santorum. Paul has run a small medical practice and Santorum a PAC and charity, but both are relatively unknown. It is interesting that throughout the debates Rick and Ron center more of their arguments (as you would expect legislators to do) around policies or laws, while Newt and Mitt encompass more operational implementations around their proposals – not just “positions.”

This should make a priority area of focus in the upcoming weeks as the nomination nears.”

Newt just gave one of the best speeches I’ve ever heard. Newt is the man with the plan. The CPAC crowd loved it.

I took some notes. Not comprehensive. got to watch the speech.

Goal: most prosperous, safest, most successful nation on planet.

Newt helped create jobs before — with Reagan, 16 million, 4 years in the 90′s with Clinton, 11 million. Maximize economic growth to create most dynamic economy on the plant.

3. replace EPA with an Environmental Solutions Agency where the primary requirement is COMMON SENSE. No more being dictatorial to American People.

4. 21st Century Food & Drug Administration — goal to be in the labs, accelerate getting medicines and new medical technologies to the people & create new jobs and a worldwide market for better medicines

10. Abolish the department of Energy, which suppresses the production of Energy in America.

11. Use fraud protection methods of Visa, Master Card, American Express to STOP PAYING THE CROOKS in Medicare and other federal programs. Save a trillion dollars in ten years.

12. Implement the return of power to individuals, local communities and states through the 10th Amendment. Governor Perry is working on the language for the proposed legislation and will chair the committee.

13. American Energy. Goal, $2.00 gasoline. North Dakota has 25 times (not 25%) — 25 times more oil than the U. S. Geological Survey predicted. Free Market & supply and demand developing American Energy. we want to ensure that no American president will ever again bow to a Saudi King.

14. Once the budget is balanced and unemployment is back down, the Social Security is safe for a generation. The Trust Fund is there even if Obama has no trust.

15. Audit the Federal Reserve. We will find out who got the taxpayer’s money and why. Ben Bernanke: if Bernanke has not resigned by the time Newt is sworn in, Newt will ask the Congress to pass legislation ending Bernanke’s term. Lew Lehrman and Jim Grant have agree to co-chair the new Commission on Gold.

16. Re-balance the powers of the THREE CO-EQUAL branches of government. There is a 54-page paper at Newt.org on re-balancing the judiciary with the other two branches of the federal government.

17. Foreign Policy – peace through a strong and vital America.

18. Although running as a Republican nominee, Newt will run an AMERICAN campaign.

— if you want for your family paychecks, not food stamps. join us.

— If you want strength and a vibrant economy, join us — from every neighborhood and background, join us.

— If you believe in the Declaration of Independence, the Constitution and the Federalist Papers, we want you to be with us.

Obama believes in Saul Alinsky. Leave that to those who believe in it.

We need to teach the Republican Establishment a lesson.

This can only be done with your help. This is people power.

We will restore and rebuild America.

My friends, THIS is the election. If Newt wins this primary, Newt will win the general election.

The Establishment, who run the money, and think they run us, don’t want to be taught a lesson.

If you think you might support Newt, explore the issues.

Because this is a huge showdown between the People and the Establishment. Now.

I you’re trying to decide, investigate for yourself. The power is yours.

Thanks for sharing your notes, Hope. I had a bear of a long day and it was nice to have Newt’s speech laid out for me.

for some reason I do not understand, it appears that that this link, as it appears up in the other comment, is not working. I think this one, above right here, works.

#1, tax capital gains as income, if the taxpayer takes it as income and does not roll it over into investments, i.e. Warren Buffet.

#2, training should be done by the corporations and companies that benefit from trained labor, not paid for by taxpayers.

#3, simple replacing one agency that failed with another agency that will fail. D.C. has that affect on agencies.

#5, eliminate corporate taxes. They are simply passed on to the consumer and not really absorbed by the company. The consumer pays in the end.

#6, agreed, and will drive many family farmers out of business.

#7, 15% OPTIONAL? Didn’t the naysayers laugh at Rick Perry when he said the 20% would be OPTIONAL? Now Newt supports the OPTIONAL agenda?

#8, agree with balanced budget, cutting spending. But fixing SS for a generation is not a fix. It is prosponing the inevitable.

#9, place a hiring freeze for 5 years. Ever watch federal employees at work? It’s a joke.

#11, need more information on how the system would work. So far it reads like a talking point.

#12, well, seems like Newt is morphing into Rick Perry. We should have nominated the real deal to begin with.

#13, yet no word on taking on the environmentalists and their phony religion “global warming.”

#15, agree, but something Ron Paul has been clamoring for for years.

#16, restrore Reagan’s “peace through strength” policy. Providing for a secure American is one Constitutional requirement of the federal government. Lock down the border. Our southern border is a greater threat than Iran. Yet, nothing on that from Newt?

The rest is talking point pap.

The problem with “ideas” and “plans” is that they are not worth the paper they are written on if there is no procedures to implement them.

Professor, why do I see Alan Grayson and Sherrod Brown ads?

It will be my pleasure to click on them :))

“I fought against long odds in a deep blue state, but I was a severely conservative Republican governor.”
— Mitt Romney

via RedState, an excerpt:
A severe conservative? It sounds more like a critique of conservatives from the left than that of a conservative himself.

“No, but I have a thesaurus in my personal library-shall I send for it?”

“hmm….er-wait, didn’t Debbie already call Mitty an extremist? The dems will have us over a barrel if we start calling ourselves extremists”

“That’s what they pay me for!”

“BINGO! No way they can top severe!…CHAMPIONSHIP!”

Romney makes it sound like conservatism is some sort of disease with which one becomes afflicted, often severely.

American conservatism is a philosophy founded on the principle of individual dignity. It is this human dignity that is the cause of conflict in our world, which is exacerbated by a challenging natural order, including finitely accessible resources.

It is actually a dichotomy. Human dignity is both the disease and the cure. It is the latter with increasing measure as people are capable of self-moderating behavior according to a common moral code. It is the final which is the prerequisite for an American experiment in optimal individual liberty.

The American left and collectivist ideology generally is premised on a philosophy which is a sponsor of fundamental corruption (i.e. denigration of individual dignity and devaluation of human life through involuntary exploitation). However, even corruption in the exception, including fraudulent and opportunistic exploitation, is sufficient to collapse a civilized society.

The cause of our present crisis is unbridled dreams of physical, material, and ego instant gratification.