Time to turn the page

Time to turn the page

or better yet, write the epilogue.

Another from Cathy, who writes:

At Wasabi in Eustis, Fl.  I really like this one. 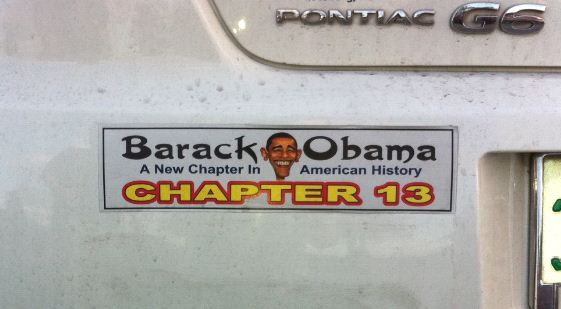 that’s a good one.

The poll has former Massachusetts Gov. Mitt Romney leading with 36 percent of voters, followed by Gingrich at 31 percent.

I believe Newt will win FL

“What Did the GOPAC Founder Think of Newt?

What did Dupont think of young Georgian Gingrich?  Enough that he turned GOPAC entirely over to Newt.  (Are you younger conservatives stunned yet?)

From GOPAC’s Website: Newt Gingrich was frustrated by the Party’s inability to capitalize on the Reagan Revolution at the state and local levels. Taking the helm of GOPAC, Gingrich emphasized spreading ideas and inspiring conservative, reform-minded citizens. Through countless campaign seminars, workbooks, audiotapes and years of grassroots organizing, GOPAC became the Republican Party’s preeminent education and training center. The famous GOPAC tapes, in particular, galvanized Republican candidates and activists.

An Interview with Pete DuPont about Newt included:

Gingrich is the Thomas Paine of the Regan Revolution.
He would support a Gingrich candidacy for President.
Colin Powell was a “country club” Republican.  Newt is a “bowling alley” Republican and the GOP can not win without it.
Newt’s entire philosophical basis was to take on the establishment.
He still considered Gingrich an “outsider” even after being elected Speaker.
Newt terrorizes liberals because he won’t give into their plan.  Moderates warm up to him because they see he will be pragmatic.
Gingrich began designing the funding, education communication and strategy for a conservative takeover of Congress 6 years or more before Contract With America.
Newt set out to re-educate the moderate Republicans.
Gingrich was the conservative conscious of the party when George Bush (41) took office and drifted back to establishment failures.
The “100 ideas a day” is what makes him so effective in strategy. Like Edison, he becomes more sure what will NOT work.

DuPont: When I began the presidential campaign in 1986, I recognized that GOPAC was helping the Republican Party but if it stayed hooked to me it would die because people would say that’s part of Pete DuPont’s presidential campaign. So we wanted to save it and we had to give it to somebody. We looked around and said who’s got the energy? Who’s got the ideas? Who would take this animal called GOPAC and carry on in the spirit that we had begun? Newt Gingrich stood out.

I took him to breakfast one morning and I said, ‘Newt, I’ve got a proposition for you.’ He said, ‘What? You want to give this to me?’ And I said, ‘Yes.’ And he said, ‘I’ll call you back.’ Half an hour later he was on the phone and it was his. And he did a magnificent job with it.

Q: What sort of changes, if any, did he make in GOPAC, as opposed to your original conception?

DuPont: Our original idea was to help three or four hundred candidates in the first election run for the Ohio State legislature and the California legislature around the country. Newt said, ‘We can do that, we can help young people, but why don’t we put together some educational material and spread it widely through the country so that people will begin to understand the conservative message, the conservative philosophy?'”

Q: You served in Congress. Newt says that when he first got there, the Republicans were so used to being a minority party that they had to kind of ”go along, get along ” compromise on the edges. Describe the mood of the Republican leadership.

DuPont: The moderate Republican Party of the 1970s were basically eighty percenters. They said, ‘Democrats, we’re for everything you’re for–but only 80% of it. Yes, we’d like federal aid education, but not so much. Yes, we can help people on welfare, but not in as expensive a way as you want to do it.’ So, as [some wag] once said, ‘There wasn’t a dime worth of difference between the two parties’ and that was true. We were just for a little bit cheaper welfare state.

Newt comes to town and says, ‘We’re not for the welfare state at all. It’s not a question of steering a little to the right, it’s a question of turning the whole organization around and going off towards opportunity and individualism as opposed to collective decisions by government.’

“Q: Another problem that the Republicans had was that for a long time it was seen by many Americans as a country club party, a party for wealthy people in the United States, Wall Street, whatever, and not a party that would ever have any kind of majority following in the United States. What was your thinking about trying to change that?

DuPont: Well, Ronald Reagan was the person who changed it. There were these wonderful people called Reagan Democrats who are really conservatives like Newt Gingrich is, like I am. And for the first time Ronald Reagan gave our party a bowling alley image as opposed to a country club image. We were suddenly talking to the people who go bowling on Thursday night and they were understanding what we were saying.”

“One of the tragedies of the Bush administration is that we went back to business as usual, make a deal with the Democrats, let’s all be friends in Washington philosophy. So, we needed Newt to come along, to stand up against the Bush tax increase and the Bush budget deal, and to say, ‘No we are still for the working people of the country, and I hope that we can keep our focus on representing the people who fight the wars and build the industries and do the work in this country. Because if we do stick with them, we can be a majority party for a long while.’

Q: You must have offended some people along the way. I know George Bush, at one point, said he felt betrayed by Newt Gingrich on the budget deal. Newt deliberately came in with a plan to kind of upset the apple cart, go after the establishment, not only the Democratic Party but the Republican Party as well.

DuPont: And Newt Gingrich was right. George Bush paid with his presidency for a very bad decision that Newt was right about. The apple cart needed to be upset. I would have thought that Newt couldn’t have done this–but he would have done better to just walk out of there with his House delegation and have nothing to do with the agreement. He did shoot it down once and it came back again and he couldn’t stop it the second time. If we’re going to be a party of populists who believe in individuals having power, we’ve got to turn that power over to them. We can’t raise taxes and we can’t regulate more and we can’t create new departments. We’ve got to begin closing down the collective side of the government and opening up the individual opportunity side.”

“Q: You’ve been in politics a long time. How often does someone like a Newt Gingrich come along?

Du Pont: Very seldom. In my political lifetime we’ve had Ronald Reagan and Newt Gingrich in twenty-five years. Two people who really had a very different vision of the government of the country. Maybe two in twenty-five years is a lot but they don’t come along very often.”

“The Public Policy Polling survey also shows Gingrich pulling to within 7% of Romney in their Sunday overnight survey.

The reason we don’t find Gingrich getting blown out by a double digit margin in Florida is that he’s winning a lot of the same groups he did in South Carolina. He’s up 37-33 with Evangelicals, 40-33 with Tea Partiers, and 36-29 with voters who describe themselves as ‘very conservative.’  The problem for him is that he’s not winning those groups by the same kinds of margins that he did in the Palmetto State.”

“Former Senator Fred Thompson, a Gingrich supporter, told Meet the Press today that the Mitt Romney camp has “Drudge in their back pocket.””

I like Fred Thompson but I knew Drudge was in Romney’s pocket weeks ago. I used to go to Drudge several times a day, I haven’t been there for a couple of weeks I wonder if others are boycotting him and if he misses the traffic yet.

Reports are Drudge hits dropped by 2 million in 24 hours one day last week.

That is one of the best ones I have seen yet.