“Pious Baloney” is the word

“Pious Baloney” is the word

The line of the Meet The Press debate this morning.

It started out with a typical Romney speech about not being a career policitian, a Santorum attack on that statement, a Romney response, and a Newt follow up:

It is the word: 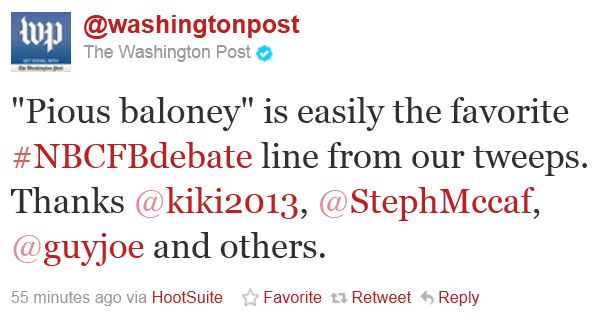 Standing in for one word that starts with B and ends with t.

I just have one question for David Gregory – WILL YOU MAKE ONE OUNCE OF EFFORT TO GRILL BARACK OBAMA THE WAY YOU ARE GOING AFTER THESE GUYS?

Same question for the hideous moderators last night. For crying out loud.

Can we have Breitbart run a debate? Please! Before Super Tuesday and before we lose any more of the contestants.

I can see it now. Barack Obama will make mincemeat out of Mitt Romney on the public stage. Romney has developed an entitlement mentality because he’s so rarely challenged by opponents.

Santorum hit his glass jaw and he staggered. Gingrich gives him the one-two and he buckles. And this is only about his campaign career! Observe the death’s head “eff you” grin on Romney’s face when Gingrich says “you’ve been running since at least the 1990s.”

Over the past several months, when someone manages to get close enough to Romney to ask a question about his campaign success rate, his response has been to blame the Democrats, or a lack of Republicans, or something along those lines.

When the heat is on, Romney can’t stand it. He can dish it out, but he can’t take it. (Just like Obama.)

Santorum hit his glass jaw and he staggered. Gingrich gives him the one-two and he buckles.

I’m bewildered they don’t do this more. Romney has NEVER stood up to ANYBODY. Look at his first reaction when Santorum jabbed him: time-keeping prissiness. McCain and Huckabee skinned Romney alive in the debates.

Obama and his thugs will have him reeling from pillar to post. He simply has no ability to fight outside of multi-million dollar ad buys and a bunch of Dartmouth “whiz-kid” aides proxies and surrogates.

The Brett Baier interview, with Romney going after Baier afterwards: Pathetic.
Anybody notice the breathy, higher pitched Romney voice as he tries to keep is cool?

McRomney is an unctuous bore. It’s all I I I, ME ME ME.

Say what one likes about McCain, he served his country. Romney to me is the wealthy Republican counterpart to Obama. Rombama.

Kind of like Ron Paul, only not as well.

Gee .. Mitt no doubt worked hard practicing that little comedy routine, claiming he didn’t run again because apparently, he accomplished all he could as governor. But he had to flip flop and say it would take two terms as president.

Then in just a few seconds, Newt shot him down again, and revealed him to be a nakedly dishonest candidate. Pious baloney that Romney tried to serve up as tenderloin. Where’s the beef?

I’m sure Romney HAS practiced hard. From what I can tell, he has accomplished nothing that he can point to that has bettered anything for anyone else. We cannot even say that he himself is the reason he was able, with a group of others, start Bain Capital or make money with it. He’s had the ability to buy expertise. What has he actually done for anyone else? Philanthropy? Military service? Achievements as a public servant during his brief time in office? We have heard no list of significant accomplishments. Compare that with Gingrich, Santorum, and Perry. I am convinced that Romney persistently has been running for high office because he believes that it’s his entitlement.

Romney is a vanity candidate. He’s out to prove that a Romney can win the nomination (his father lost miserably when he ran for POTUS) and that a Morman can win.

This is ALL about Mitt, not about the nation, for him.

Another GOP candidate with Daddy issues…sheesh!

As I listenedd to that clip again, what jumps out is Romney saying that a person should not run for office if he has small children, or if he isn’t wealthy (Romney is so qualified that he forced Ted Kennedy to take out a mortgage).

I have been fighting with myself, but the only way I could vote for this guy would be if Allen West was his running mate. And then I’d still be gagging.

Exactly. He’s going to have to pick one hell of a VP to get me out of my bed an hour early and into the voting booth.

He will – he will pick someone like Haley to try to dupe Conservatives into voting for him; or in the worst case have someone to blame his loss on (see McCains choosing of Palin)

Well there’s still the Congressional races to consider, not to mention state and local elections. Still excellent reasons to get out of bed, if not more crucial now.

You’re right; I wouldn’t miss being able to vote against Debbie Stabenow for the world.

No way I could/would vote for Willard Milton Romney. Period. Even if the Blessed V.M. herself were the VP candidate. I like Allen West, but the pres. is the pres., and a V.P. candidate doesn’t do it for me.

I agree pretty much with what Don Surber wrote…Newt hit it out of the park (several times) but for some reason lost the debate. Many of us Im sure found ourselves in agreement with Newt yet some invisible something forces us to somehow see Romney as an apparent winner in this.
Maybe its what we read or something subliminal.
Ever wonder where all this would be if Romney looked like Ron Paul? (Im sort of kidding..but you know….)

Wow, Romney looked absolutely horrible in that clip. And he wasn’t even really being attacked! Mere logical questions and facts and he buckles…

The worst part of a Romney candidacy is that when he gets on the stage against Obama in debates, this is how it will likely go:

Obama: “Well Romney single handedly dismissed the state constitution and allowed Gay Marriage in MA, so not sure why is he arguing against it now”

Obama: “Well Romney bragged that he led the first, and only, state to pass Cap & Tax, so I am not sure why he is arguing against it now”

Obama: “Well Romney put Planned Parenthood on his Oversight Committee and gave them 5Billion in tax breaks to build abortion clinics, so I am not sure why he is arguing against them now”

Obama: “Well Romney made permanent one of the strongest gun laws in the country, so I am not sure why he is arguing against them now”

Oama: “Well Romney bragged that he hoped Romneycare would be a model for the nation, so not sure why he is arguing against it here”

Romney will be forced to argue against his entire record, or embrace it and stumble along in a wishy-washy haze of empty words. Much like his inability to decided if he wanted 2 terms or to be a politician he shows here, he will be tied into so many knots he wont really know what to do and come off as the “say anything” politician we all know he is…

In other words, Barack I coronation in January 2013.

“Romney will be forced to argue against his entire record…”

If not so sad, it would be funny: Obama & Romney, each judged to be the best his party has to offer, both doing their flat level best to run away from their own records. Is that a picture of what’s wrong with America, or what?

A third Party Ron Paul or Ralph Nader could walk away with the Oval Office after all.

Zero chance real Republicans and Conservatives will vote for Paul.

That’s like cutting off your legs to get rid of a boil on your foot.

I wasn’t suggesting conservatives would vote for Ron Paul.

My thought was the Republican and Democrat bases might be so disgusted by their respective party’s anointment that enough would stay home, enabling nut-job Ron Paul/Ralph Nader voters to seize the day.