I’m still trying to wrap my mind around that phrase used in the email from reader NCMont to explain his move from D.C. to Austin.  I guess it’s like when I make the trip from Rhode Island to Ithaca when school is in session.  Or is it the other way around?

Basically, NCMont and I are ….

Professor, I’ve been reading your blog for about a year – big fan, one of the few blogs I check daily. I’m a young conservative who grew up in one of the most liberal places in the country (DC) and now lives in another city with less intelligent, but angrier liberals (Austin, TX).

I’m back in DC for the holidays and saw this car on the way home from a book store. (The light turned green right as I snapped the photo but, don’t worry, we were stopped). It would probably only take me 15 minutes in either city to find enough bumper stickers to fill your sight for the rest of 2012. My user name on your site is NCMont.

Oh, and the red sticker next to the Obama one reads, “Peaceaholic” – whatever that is. 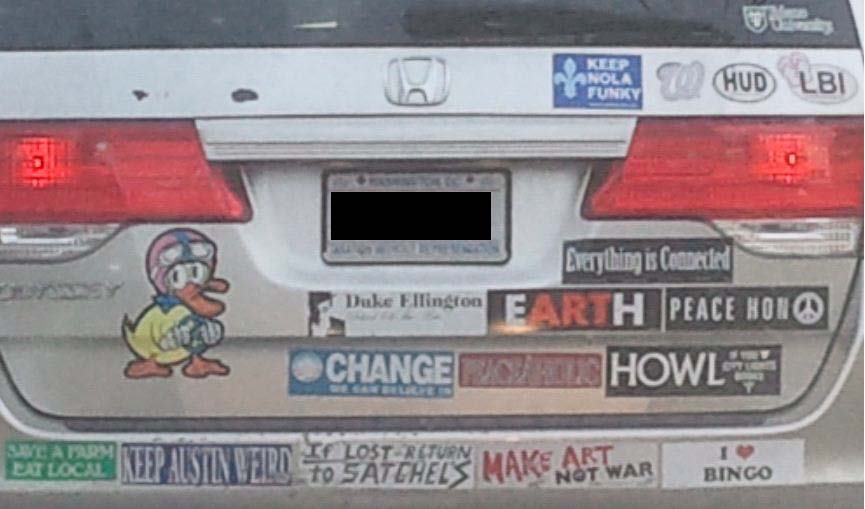 What’s sad is that the “I -heart- Bingo” bumper sticker is the most profound one of the bunch.

Pretty much sums up the liberal mind set on display.

A “peaceaholic” is someone who couldn’t figure out what a “coexist” bumper sticker meant.

Yes- being angry makes you stupid, seems to percolate the brain lol

I’ve been a reader for a while, but had to register and comment to offer some insight into the “less intelligent, but angrier” comment. As a Texan that lived in Austin for about 10 years I can see where he’s coming from. The Austin libs come in 3 types. The old 60’s hippies that flooded the area and never left, the hipster college kids, and the many out of state transplants that brought their ideology with them. The rest of the state just kind of tolerates them because Austin is such a beautiful place.

I think that is where the anger comes from. We know the hippies are harmless. We know the college kids are just as Rushbo says “young skulls full of mush”. And we know that the rest of the state will outvote the transplants. We just kind of pat all 3 on the head here and say “ain’t they cute.”

This is a pretty accurate description. I should add that what I’ve noticed is that there seems to be a large contingent of liberals (from from all 3 of Spider’s groups) who despise with a seething rage (probably because they were poisoned by all the anti-bush toxins) the fact that Texas is considered a conservative state, and therefore one of the (if not the) most successful states in the US. To them, the Texans who live outside Austin (their comfortable bomb-shelter) are no more than racist hicks who exploit poor people to their advantage. Many of the young ones lash out with vandalism (“#$%& Rick Perry” and “Ron Paul 2012” -sorry Paul supporters, it just really turned me off to the guy), while their child-like adult, “credentialed-but-not-educated”, professors fuel these kinds of attitudes.

In my opinion, this view couldn’t be further from the truth. I’ve found Texas to be full of kind, moral folks with a great deal of common sense who wish to be left alone to pursue their interests and ambitions – whatever they may be, Texas makes it easier to accomplish them.

When I read the Austin Chronicle (the most egregiously liberal area “news”paper) to see the latest nonsense, I laugh and shake my head because many of these people will, thankfully, never understand the tremendous destruction of the human spirit a high-tax, big-government, corruptopolis (like DC) results in for those they claim to be working for. (My mother was a 9 year inner-city DCPS teacher who has more horror stories than one could imagine).

Parked by the National Mall the other day (one day after the DC council blacked out the live coverage of Kwame Brown’s ethics investigation) and had a delivery man who was willing to exchange dollar bills for quarters for the meter. “For a profit,” he joked. “Proceeds go to fund corruption in the city government.” That about sums it up.

Explains the coastal regions of California, also. If the coast would just drop off the face of the earth, California would once again be pretty reasonable!

Eh hmm, no everyone who lives on the California coast is a liberal and not all areas are red.

Argh… noT everyone and that should have said, “not all areas are blue.”

ncmont, what do you expect from a city whose motto is “Keep Austin Weird”?

Part of the problem is UT and always has been. When UT has professors like Robert Jensen, who makes no secret of being a Marxist and has a poster of Che’ Guevera on his office wall, you can expect that the “mush” brains he is indoctrinating are coming out of UT as good little socialists.

You see, they love the freedom of Austin, and its beauty, because they are free to live their lives as they want. It is just everyone else’s life they want to change.

Austin also has a large gay community (that is where the Austin Cronicle originated. It was started to give a print voice to the Austin gays. No one in the Austin area considers it a legitimate news source. It’s more line a propaganda publication.)

Once you get out of the city limits, into Williamson County, and now Bastrop County (the fastest growing area outside of Austin) people become MUCH more conservative. Even Democrats in those counties are more conservative than say, Northeastern Republicans.

Austin is a great place to live if you can tolerate the hippies, and the stone slackers. Hippy Hollow, on Lake Travis, has been known for decades as a safe haven for nudists. And the conservative base in Austin keep fleeing for more conservative counties. With the addition of 4 lane highways going out of town (290 and 71) the migration has been easier.

I know that people come to Austin and judge all of Texas by it. But it is an anomoly. Even Tejanos are becoming more conservative as exampled by the elections of Francisco Canseco and Bill Flores.

To understand the Texas mindset, you have to understand that Texans are proud of the fact that we were once an independent nation with an Embassy in London. That independent is part of the Texan DNA and the more D.C. pushes, the harder Texans, even center-left Texans, will push back.

But my biggest complaint is the ones who move here from other states to find work. They can’t find a job in Michigan or Illinois, but are quick to say “Well, in Illinois/Michigan, we did it this way.” I quickly recommend to those folks they return to the state that seemed to do it the way they approve of.

To be honest, I’m trying to flee myself to work in the Eagle Ford Shale.

Don”t know if you’ve seen this one yet, but if you ride around Texas long enough you will. I’ve got one in a box somewhere and if Washington pushes much harder it’s going on my truck.
http://rlv.zcache.com/texas_secede_bumper_sticker-p128629739776188685z74sk_400.jpg

We have the same type of scenario in NC, in Raleigh. The combination of being the state capital, home to NC State, and ringed with suburbs largely populated with dadgum Yankees has raised the liberal quotient to comical levels. Of no help is the proximity of Chapel Hill, NC, home to ultra liberal UNC, about 15 miles to the NW, and Durham, NC, home to ultra liberal Duke University, right next to Chapel Hill. Then there is the vaunted Research Triangle Park just outside Raleigh to the west, populated with highly educated liberals from all over the world. The Raleigh News & Observer is one of the most blatantly unapologetic liberal bullhorns in the country, virtually unreadable to anyone but uber-liberals.

On the road the other day I spied a bumper sticker that had a peace sign and the slogan “an idea whose time has come”. Now, how exactly do you enforce “peace”? Maybe, just maybe, at the end of a gun barrel? Liberals, I’m so sick of them and their unicorn vision of the world around us. They cannot come back to reality, even when Rome burns around them. Liberalism IS a disorder.

In the past year, I moved from Little Rock (a liberal city in the south) to Syracuse (a moderate city in the North), on thing that always got me laughing is how much stereotyping is done by Northerners. I always got asked a variation of “How did you like it” by the liberals and conservatives. I’m sure Prof. Jacobson has heard variations on this at some point too.

The Liberals would usually ask it like this, “How did you handle all the rednecks and racists down there?” Usually I’d have to point out that Syracuse is more White than any other place I have ever lived…seriously I’d go to Carousel Center and I’d only ever see a few minorities, usually working. I even worked with a nice liberal woman, who refused to go to Carousel because even that was too many blacks, and I found it interesting that none of the other people I worked with found that bigoted. I’d have to point out to these liberals that there was just as many “rednecks” in NY as there were in Arkansas…the sounds of indignation filled the room afterwards. There is no greater insult as to compare a Northern city to a Southern city. Which kind of shows how close minded and bigoted liberal Northerners are to those “racist hicks” down South.

Jutin, I just read a blogger (won’t give his name because I don’t want to give him traffic) that claims that the problem Iowans have with Rick Perry is that he comes from a “Confederate” state and Iowans were big abolishionists. I thought that was pretty funny coming from a state that is 96% white. If Iowa is so welcoming of minorities, why aren’t there more?

Ironically enough, I spent two years in Mississippi after Katrina, and found it to be one of the most racially tolerant states I had ever been in. It was not uncommon to see blacks and whites in their yards bar-b-quing together on weekends and while some of the older neighborhoods were segregated, none of the new ones were.

I see the same thing in NC, which is 22% black. I was born and raised in Michigan, but see greater racial tolerance here in NC.

I lived in Austin in the late 1980s while working as an engineer for a high-tech company. To show you how leftist the city was, Austin was called the “People’s Democratic Republic of Austin” by non-liberals and liberals alike. Austin is hip-deep in unabashed communists, and I have no doubt many of them would love to erect their own version of the Berlin Wall and start liquidating “racists” (non-communists).

Perhaps Austin has matured since then. Given the fact that Austin is home to the twin collectivist parasites of the Texas state government and the University of Texas, I doubt it.

I think that Daffy Duck decal sums it all up pretty nicely.

The only new tax I could support would be on bumper stickers.

Since there seems to be a ratio of bumper stickers favoring liberal ideology of about 100:1, I wonder if that offers any psychological insight on why some people need to broadcast, to wear it on their sleeve.

This is one case where I’d agree with cash for clunkers.

Given the bar you’ve set and your newfound notoriety, I find this post deeply disappointing.

Revolver or semi-auto to shoot myself?

Our ‘Enry. My first ‘eckler.