Iowa Caucuses Tweets of the Night

Iowa Caucuses Tweets of the Night

The election was close going down to the wire between Santorum and Romney, with no winner declared as of this writing, with both in the 24% range.  Paul was at about 21%, Newt at 13%, Perry at 10%, and Bachmann at 5%.  (Results not final)

The big news is that Newt gave a rip-roaring speech signaling he’s going on attack, and Romney failed to get the 25.3% he received in 2008.

Here are the Tweets of the Night:

The “Mitt wished too hard for something, and is going to get it” Tweets (also here, here, here) 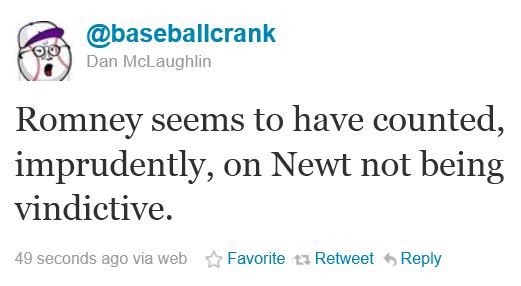 The “I long for the Dukakis in a tank photo” Tweet: 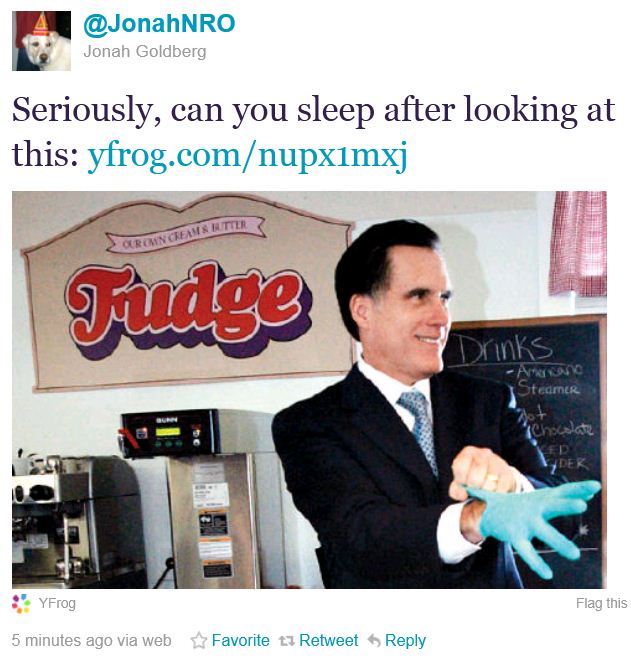 Tried to check Rick Santorum Web site a few minutes ago and I couldn’t even get in. It’s back now…impressive…

how much it cost per vote

does that say something?

not sure if that includes the PACs

Ed Rollins, who is now a Fox News Analyst (yuck) makes this statement: “Santorum, obviously, has some momentum. He’s moved up but I don’t think he has the organization of the first two [Paul and Romney].”

That picture in Jonah’s tweet says it all: Mitt Romney as Dr. Jellyfinger.

Beating your opponent by 1 vote is a victory. Beating him/her by 2 votes is a landslide. Romney won by 8 votes. This is scored like baseball: after 9 innings, the team with the higher score wins. It does not matter if it is by 1 run or many runs. The team with the greater number of runs WINS.

This is all disheartening and frustrating. Santorum is not electable nationally because his emphasis on social policy will be perceived as advocating the enshrining of Christianity with law. This will turn off huge segments of the electorate, if for nothing else than the fear that it could allow a tit-for-tat with sharia law. Committed family values advocates should realize that. Why doesn’t he. Why don’t they. Wasted votes, essentially boosting Romney, and I doubt that is what his supporters intend.

of course the social (and economic) conservatives like me won’t vote for him because we’ve always been so well represented in the past.
oh wait…
I think there are many social conservatives out there who have been silent up to now and may vote for him.

Well, we are a nation based on Judeo-Christian laws, and it hasn’t gone to hell, yet. And while there is a push to allow Sha’ria law in the U.S., there would be such an outcry over it that it would be heard all the way around the world.

There is no religious litmus test to be president. Why do you want to create one?

Perry has it correct, I think. Social policy is mostly a states’ rights issue, not where a president should be focusing versus economic and foreign policy. It’s divisive, difficult, and makes it harder (I think impossible) for Santorum to be elected at this point in time. It’s about timing and emphasis.

Good news: Paul did not win; Perry and Gingrich continue. If Bachmann quits, I will consider the Iowa Caucus a complete success.

PS. I might be wrong about Perry; he is “reassessing” his campaign. Too bad; I would have liked to see what he could have done in South Carolina.

That Ron Paul shot at Huntsman is hilarious!

I had fun last night with my group trying to convince people to caucus for Palin. I was invited to be an observer and saw how the caucus system worked.

The precinct I watched had Santorum as the victor followed by Romney, Gingrich, Perry, Paul, Bachmann and Huntsman (one vote).