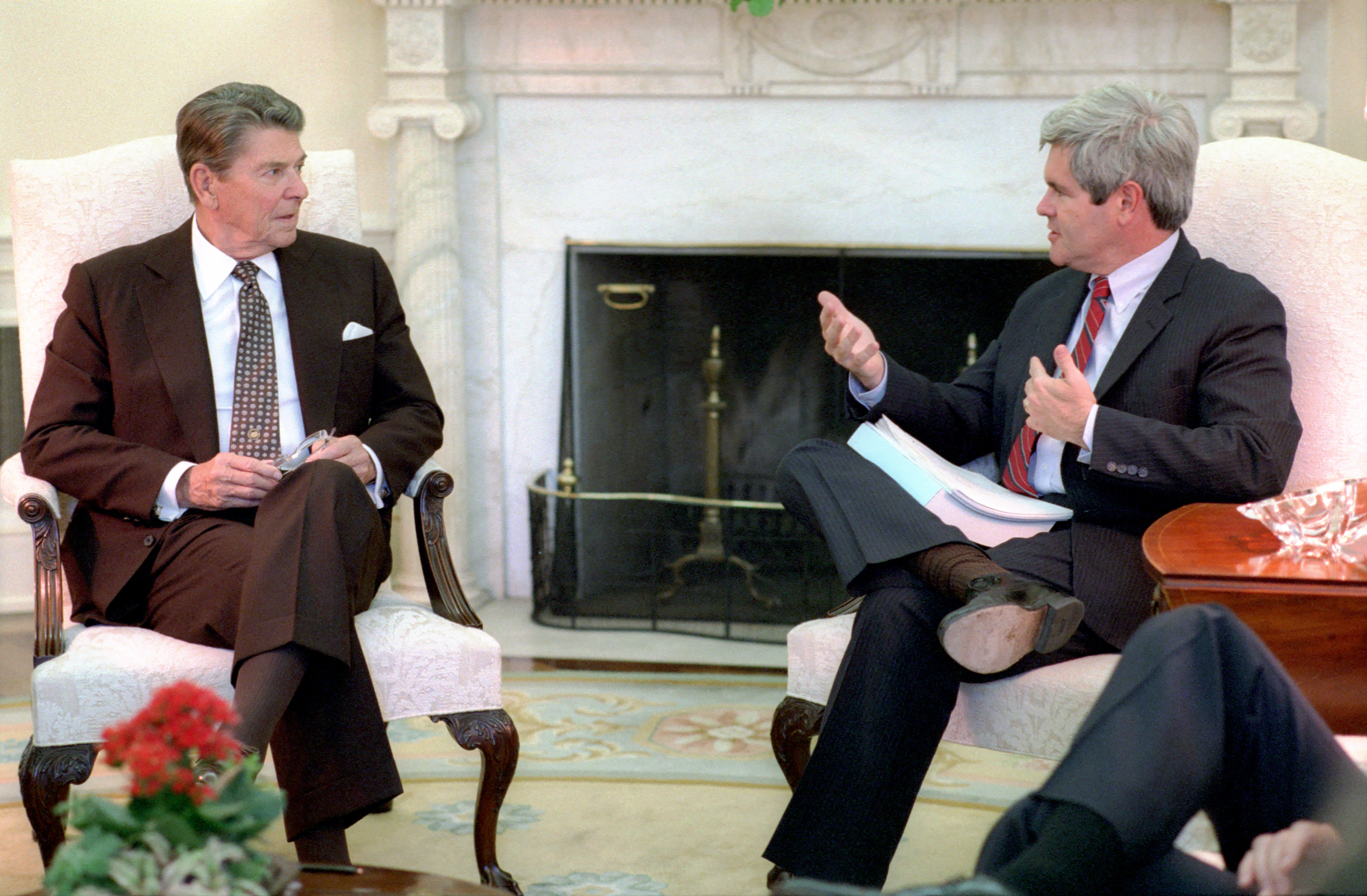 I think that’s a good one, although it presumes Reagan would have known who Romney was.  Any other suggestions?

And the timing is good as Citizens United (yes, that Citizens United) is promoting a Reagan film and has just released an ad on television in Iowa featuring the Gingriches.  Obviously, it is some soft support for Newt against the barrage of attack ads:

“National Review is smearing me as a Conservative Republican candidate.”

I want to retract/remove that comment – but I don’t see how to delete it! 🙂

I wanted it to say that National Review is trying to say Newt is not a Conservative Republican.

I hit [SUBMIT] too fast!

“…and then Ted Kennedy said those communists aren’t such bad guys after all.”

I don’t think you want to get into a caption contest for that pic of Newt with Reagan. =)

Mine would show Newt with a thought balloon thinking: “I’d rather be sitting next to Pelosi.”

PRESIDENT REAGAN: “No, Congressman. That would cripple our defense program.”

. . .
(However, in Reagan’s massive 784-page diary, Newt’s name does come up — once. On Jan. 3, 1983, Reagan wrote that he met with “a group of young Repub Congressmen,” and says that one of them, “Newt Gingrich,” proposed freezing federal spending at 1983 levels, which Reagan rejected out of hand because it would “cripple our defense program.”)
. . . .

Sorry, but Coulter isn’t a source for anything reliable. This is the same person who says in the column you link that Newt had almost nothing to do with the takeover of Congress, yet everyone else credits him as being the driving force behind it. As for a single mention in Reagan’s diary, Jack Kemp is mentioned only 11 times, mostly relating to foreign policy issues and only 4 relating to budget matters and only two related to tax policy. Reagan also notes in the diary that the entire Republican congressional leadership (other than Kemp) wanted a budget freeze (p.61). I wonder how many books Coulter searched in order to find her gotcha moment. There are many legitimate criticisms of Newt, but Romney supporters would do well to stay as far away from Coulter’s “bombastic” talk as possible, because she’ll turn on Romney too eventually (like she did at CPAC 2011).

(added) And in the Reagan autobiography, Kemp is not mentioned at all in the discussion of supply-side economics, contrary to what Coulter says in her column. (I used Google Books for all searches). If Coulter said it was raining outside, I’d look out the window before grabbing an umbrella.

On redirect: Your challenge to the credibility of Ann Coulter as “not reliable” is inapposite. I have myself noted that she sometimes displays a tendency for turgidity of expression that has become a signature part of her unique style of writing commentary.

However, I did not quote any of her general statements regarding Newt’s claims re: the quantum of credit he may or may not deserve for his role in the takeover of Congress in the mid-90s; nor did I address her views with respect to the claimed Gingrich contribution (or not) to Reaganomics, vis-à-vis Jack Kemp. I purposefully eschewed any reference thereto, focusing my attention exclusively on her factual point regarding the sole reference to Congressman in the diaries. Furthermore, my submission for your “caption” challenge, above, was entirely derivative thereof – i.e., as a reference to the Gipper’s contemporaneous remembrances.

So, whether your criticism of her summary opinions on extraneous matters is valid, is not reflective of her accuracy in pointing out the fact that Ronald Reagan made but one mention of Newt Gingrich in the voluminous diaries he kept during his entire eight years as the President of the United States; and that his one mention of Gingrich arose out of a budgetary “proposal” the then-Congressman made in Reagan’s presence, which the President said at the time he had dismissed out of hand because it would “cripple our defense program.”

Moreover, I would also submit that your hasty dismissal of my submission for your “caption” challenge, which was based on matter that I did not rely on in any respect, was therefore arbitrary and capricious.

I respectfully submit the following documentation in support of my position:

Here is a link to the relevant page from the index to Reagan’s Diaries demonstrating that President Reagan indeed referenced Newt Gingrich (who was then a Congressman) only ONCE in the diaries that Reagan kept as President of the United States.

And, if you then go to page 123 of the diaries, you will find that President Reagan did record in his diary, on January 3, 1983, that he had met with a group of “young Repub. Congressmen” and that one of them, Newt Gingrich, [had] “a proposal for freezing the budget at the 1983 level. It’s a tempting idea except that it would cripple our defense program.”

Incidentally, President Reagan further added “And if we make an exception on that, every special interest group will be asking the same.”

Therefore, far from being inaccurate, Ann Coulter’s comment was spot on, and I was on firm ground in reliance thereon. It had occurred to me that her point on that score was one well worth exploring, and, on examination, I was able to determine that she got it right. Further, I would have been remiss in not giving Ann credit for the hit in posting my comment.

To be candid, I did not have any expectation whatsoever of “winning” your caption challenge! You are an enthusiastic New Gingrich supporter, and my submission was akin to the proverbial fly in the ointment. When you posted that photo out there as a challenge, I took an entirely legitimate shot. The photo wrongly suggests to the uninitiated that Newt may have been a close confidant of Ronald Reagan. But you and I both know that it was likely a publicity photo taken of a young Congressman Gingrich sitting with the President, which is rather standard fare in party politics, and on both sides of the aisle.

Who knows, that photo may well have been taken the very day that Gingrich made his not so well thought through proposal to Reagan. He got one shot at pitching an idea, and came up small.

But, in light of the above, perhaps I might at least salvage an honorable mention?

Say . . . for submitting the most “historically accurate” caption?

Coulter’s point was to contrast a single mention of Newt with “several” refrences of Jack Kemp on the issue of supply-side economics. Her point was to use the single reference to Newt to diminish his role relative to Kemp and others she would acknowledge helped shape the policies. But her contrast was factually false, because while Newt was mentioned but once, Kemp was mentioned only twice with regard to tax policy. So her point — using the number of mentions in a book as evidence of one’s contributions — was invalid. But I’ll give you honorable mention, for trying!

“Honorable mention, for trying,” you say?

Hmmmm. That sounds to me a little like an “atta boy” pat on the head a Congressman might get if he were to take a singular opportunity for a sit-down to present a budget proposal to a President of the United States, but strikes out swinging because the proposal he offers “would cripple our defense program” at a critical juncture in the Cold War!

And, in accordance with that curious measuring stick — “honorable mention, for trying” — might that also be how we should now measure the failure to obtain the requisite number of signatures to qualify for the primary ballot in the Commonwealth of Virginia . . . particularly given the fact that, as was devastatingly pointed out by Ed Morrissey at Hot Air, Virginia has been Newt’s home state for the past 12 years?

“Unfortunately, Mr. President, you were right. It can be lost in a generation.”