“Mothers are the civilizing influence”

“Mothers are the civilizing influence”

It’s the major headline at Drudge: 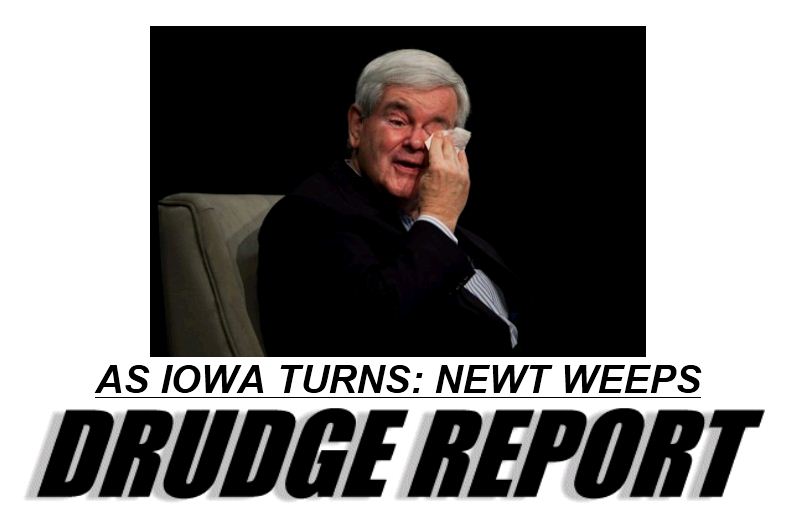 But the headline suggests it’s a reaction to polling, but instead it was questioning by Frank Luntz about Newt’s mother.

The most poignant moment to me was not the discussion of his mother but at 4:25 when he recounted a story told by a young mother about how she had 3 children in three different schools the morning of 9/11, and how she had to decide which one to get first; she said she would do anything not to have to do that again.

Matt Lewis points to the evolving reaction of the public to candidates expressing emotion:

As Gen. Norman Schwarzkopf once said, “I don’t trust a man who doesn’t cry.”

Update:  The more this race continues, the less I like Romney on a personal level, Mitt tweaks Newt: ‘I won’t cry’:

Here in Merrimack, Romney started talking about his parents and what they meant to him, and how they taught him to love America — and said, “No, no, I won’t cry.”

See updates in related post as to Romney campaign disputing this was a shot at Newt.

Helps big time. Shows he is in touch with the common everyday person and what they have to deal with in life. Makes him seem less zany!

Helps. He is so intellectual, so smart – and yet this shows his heart, his human-ness.

Talking to a group of Moms, saying the things he said, it fits. It would be hard to watch if he did NOT cry thinking about his mother who is now passed, who had bi-polar mental illness, Alzheimer’s, etc. It reveals so much about him.

And he had levity – a touch of humor, too.

He got more emotional than I’m comfortable with, but whoa, compare with Obama, who couldn’t be bothered with his own mother, and with the usual politician platitudes. No question about his sincerity.

A year after my mom’s passing, I can’t talk about her without tears immediately flowing from my eyes.

I expect conservatives to focus on logic and reason and largely ignore emotion when talking about public policy. Maybe that makes us seem cold and uncaring to people left of us. Of course, I think they are completely mistaken. But if a man felt close to his mother, I certainly don’t find anything strange if he becomes emotional talking about her … in any social situation.

LukeHandCool (who hates it when he’s watching something sad on TV and loses his painful struggle to keep that one tear that’s been building up from finally cascading down his cheek … which invariably causes his comparatively emotionless wife to laugh and tease him … but who is otherwise the essence of masculinity … and who wears the pants in the family … when she lets him).

You can watch the entire event via the following link:

He showed more real emotion in those 3 minutes than The Once has shown for 3 years. I have to think the American people appreciate this fact.

The order matters. It is desirable for people to temper rationality with empathy. The reverse, however, is not generally productive, since the latter, by definition, ignores our objective reality.

Also, I would question the title’s assertion. There are people who empathize with their mother, father, and both. I value my parents as equal, but distinct integral contributors to my identity. As female and male they are predisposed to one behavior or another, but each perspective serves as a valuable reference.

Sorry, the cynic in me looks askance at these tears.

I don’t care what Schwarzkopf says (and I’m guessing it was in reference to soldiers in tears over the loss of a fellow soldier in battle); men crying except in extreme pain or loss is not manly.

I suppose this will be a hit with the touchy feely sorts.

Too much estrogen or estrogen analogues in the diet these days. No wonder everyone in DC is so enamored with bipartisanship and reaching around across the aisle.

Frankly it leaves me cringing.

It helps if people know the context. It could hurt if they don’t.

Newt sure would look coldherted if he hadn’t shed a few tears. You don’t talk about your mother’s death in a calm manner. I am not of the school that says men shouldn’t cry. If you hurt, you cry. It doesn’t help much but it is an emotional outlet. I never have understood why men think they have to be so strong and unemotionable to be “manly”. Last time I checked, men do belong to the human race. Some of them, anyway.

How many of the other candidates would show that much emotion in a similar situation? Any bets?

In spite of jakee308, I think his reaction is the measure of a man. If he can’t cry at certain times, he can’t lead. He can push, and scream, and bluff – but he is not a leader real men and women will follow when the going gets rough.

Furthermore, I have always felt that the down ticket races were going to be as important, if not moreso. With Palin and Rubio choosing not to run, I knew months ago that we would have to have a Congress willing to smack the President back in line.

Interesting how this is being debating in the political arena, as opposed to the human endeavor.

If not, what are you talking about?

Which is why I bolded No Difference. Newts tears are merely a bit of unnoticed texture upon a fabric that many have already tried. And like corduroy or wool, people already know weather they like the basic fabric, or not.

I at other sites that Romney has already ‘zinged’ Newt by saying “I won’t cry” or some such malarky. Real classy.

You should see some of the comments at other ‘conservative’ sites in threads about this. Truly vile comments. You’d find kinder comments at a left wing site.

I’ve lost so much respect for some pundits and blogs I used to frequent on a more regular basis. This has been a terrible election cycle for conservatives. Not the attacks from the Left… but the truly disgusting attacks from supposedly ‘Right Wing’ pundits and bloggers.

I understand there are people who are almost in total control of their emotions who can speak of a departed loved one without a struggle to maintain composure. But surely those who don’t have this ability can be forgiven when talking about their mothers!!

Totally unnecessary and cheap shot from Romney. Leaves a bad taste. He’d better be careful trying to be a little bit too clever. It doesn’t come off well … at least to me it doesn’t.

“I’ve lost so much respect for some pundits and blogs I used to frequent on a more regular basis. This has been a terrible election cycle for conservatives.”

You and me both. I won’t ever buy a Coulter book again, or take the time to watch her clips or appearances. Same with many others. I wonder if they have any idea what we’re talking about, the damage they’ve done with their arrogant tribal elitism. I see many “conservatives” now the way I’ve always seen the Left — completely contemptuous of ordinary Americans and our sense of judgment. What a disaster this mad rush to Romney is proving, and will yet prove, to be.

Make your case for yourself, as opposed to Obama.

An episode of “Survivor”

Thinking Michelle set the tone, going after Palin, but that’s beside the point-

As far as Coulter goes….the writing was on the wall.

Anyone who has lost a parent or loved one especially to alzheimers disease can relate to the pain. My mother-in-law is losing the fight with this horrible disease. You would have to be some kind of cold hearted SOB not to be affected. I believe it helps Newt.

Alhzeiers is a particularly devestating disease & much more than general dementia – where sufferers can be somewhat themselves.

Until recently it was only able to be diagnosed post mortem – so many many families suffered unbearable turmoil & upheaval without knowing why.

Bi Polar + Alzheimers would be a turbulent combination.

I would be crying too .

…Think the level of tears out of proportion and he blew it in the sincerity department with what he would tell his mother…that was total campaigning mode and cheesey..would have been impressed if he would have said a simple, “I love you, Mom. Thank you always being there for me.” But a campaign pitch??? Damn. Just when I was starting to take him seriously again!

To verify. My comment was not defending Mitt. At all. Can’t stand the guy and wish he would have a the-family-needs-me epiphany and leave the race!

I suspect that Newt is someone who feels things deeply and tries to cope by staying in a more though-oriented mode. He says earlier in this interview that he tears up when they sing Christmas carols, that his mother loved to sing, that his mother was someone who had joy in life and her friends, and who gradually lost herself to illness, including bi-polar disease. That is an excruciating way to lose someone we love. That is how Newt began to study brain disease and Alzheimer’s. He said, it isn’t just “policy” – it’s my mother.

I was especially moved at the very end, when Frank Luntz asked Newt what Newt would say to his mother, now, and what Newt would say to the people in the audience. Newt basically said that he hopes to be a candidate worthy of our country and that we are in serious trouble and we must rise above politics as usual.

The Republican Establishment is acting as if we can have another Dole/McCain experience, and pushing their preferred candidate, Romney.

But that ship sailed a long time ago. Our country has a profound choice to make in this primary, so that we can then make a profound choice in the general election. Newt is the guy who understand the profound solutons we need.

With the new technologies, the government is on the verge of being able to track us in real time and record our emails and even keep records of 20-year-old phone conversations, should they ever decide to “investigate” someone.

This election may be the most important in our history. Have we not had enough of the soulless socialist machine?

The most important thing to me is to dismantle what the Leftist have been putting in place for some 80 years. Do you not see that they want to dictate to you every aspect of your life? Americans are born free. All humans are meant to be born free.

Let us take our stand for freedom as in the olden time.

I watched the video of Newt with the Moms 2012 where Newt tears up and I felt sympathy and empathy and appreciation for Newt. Beware the snares of the Establishment and don’t fall for it.

BTW, Newt is apparently close to raising $10 million dollars in the last quarter of 2011, so if you are planning to give money to Newt, today before midnight would be a really powerful day to give.

Happy New Year to ALL!