The plot to blow up an American passenger jet over Detroit was organized and launched by al Qaeda leaders in Yemen who apparently sewed bomb materials into the suspect’s underwear before sending him on his mission, federal authorities tell ABC News.

Investigators say the suspect had more than 80 grams of PETN, a compound related to nitro-glycerin used by the military. The so-called shoe bomber, Richard Reid, had only about 50 grams kin his failed attempt in 2001 to blow up a U.S.-bound jet. Yesterday’s bomb failed because the detonator may have been too small or was not in “proper contact” with the explosive material, investigators told ABC News..

In posts on December 26 and the days that followed, I noted that the immediate reaction of left-wing bloggers was to try to make light of the attempt.  Matthew Yglesias of Think Progress called it Not So Scary “Terror”, while Faiz Shakir also of Think Progress attacked Pete Hokstra for criticizing the Obama administration’s failure to connect the dots.

Oddly enough, Maureen Dowd made the same point Hockstra had made:

If we can’t catch a Nigerian with a powerful explosive powder in his oddly feminine-looking underpants and a syringe full of acid, a man whose own father had alerted the U.S. Embassy in Nigeria, a traveler whose ticket was paid for in cash and who didn’t check bags, whose visa renewal had been denied by the British, who had studied Arabic in Al Qaeda sanctuary Yemen, whose name was on a counterterrorism watch list, who can we catch?

The most preposterous statement was made by Spencer Ackerman (at the time blogging at Firedoglake), in what was the Worst Tweet of the Year: 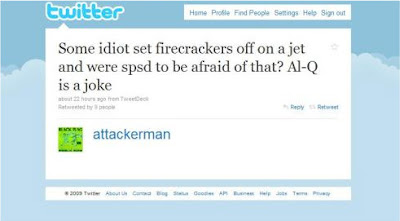 After that statement, I ran this video of how that “firecracker” would have looked had it exploded: 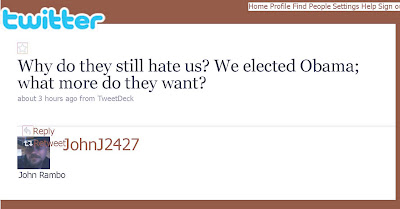 Janet Napolitano, meanwhle, assured us that “the system worked”:

Finally, I noted that Scalia Was Right About Releasing Gitmo Detainees in his dissent in the Boumediene case.  It’s a must read.

[…] Legal Insurrection has a reminder as to what happened Christmas 2009 […]

“We’re supposed to be afraid of firecrackers?”

“We’re supposed to be afraid of box cutters?”

I guess mass murder isn’t scary to a guy who spends his time fantasizing about pushing Republicans through plate glass windows.

The test blast is not that impressive when considering the fail safe structures used in modern aircraft. It is very possible that the aircraft, (B-777) would have survived.

With that said, terrorism cannot be taken lightly and vigilance is needed to be part of everyday life in America.

Reid rightly is in prison for life but should have been tried by military tribunal.

Talk about missing the point entirely. That it was not, in your opinion, an impressive explosion has nothing to do with ineffective airport screening techniques or extending habeas corpus protections to enemy combatants. The underwear bomber chose explosives over the tried and true box cutter but should have never been in a position to carry out his plot – failed or otherwise.

Terrorism is successful even if the targets are not killed in the attack. The intended reaction to terror is instilled fear in the targeted group such that they submit to the attacker’s demands.

Moreover, your nonchalance at the prospect of success of that quantity of explosives bringing down a modern airliner is, to be charitable, insane.

I dare say that if you were on an airliner (an oversized Coke can with wings) flying five miles above the Earth’s surface at Mach 0.9 with an outside air temperature of somewhere around -60 F and such an explosion were to occur, it would not be plastic explosives that you would find in your undershorts, sir.

And Christmas Day marks another special historical remembrance for all Americans as well . . . a great turning point!

Naturally, I couldn’t resist and went back into expand it a bit, Luke . . . it will be up pronto, with more information. I was inspired by the reenactment earlier this afternoon.

Those that “mock” the Christmas bomber should have been here, where the plane flew directly over my house on approach. I find nothing to mock in that. My Corps of Engineers Branch experience says 80 Grams of PETN is more than enough to disable a large air liner. Had that plane come down over my neighborhood it would have killed far more Muslims than anyone else. Irony is a beotch, no?

Mr. John Rambo’s tweet of – “why do they still hate us”, and “we elected Obama, what more do they want”, is pathetic in it’s very essence and core relation of appeasement and apathy to secular progressive liberals, aka, anti-American socialist-marxists, and their agenda..

“Why” is already an understood point, for which Mr John Rambo does not seem to understand, and “what more do they want”, is they, (SPL- Democrat or Republican RINO, makes no difference) all, want all constitutional conservatives to become non-existent, and to disappear, one way or another, as they have not intention of ever wanting to coexist with humane, intelligent, common sense, independent thinking minded American Patriotic Tea Party folks, who are not useful idiot indoctrinated braindead drones like them, who believe in Individual Freedom and Liberty, and Equal Justice under the U.S. Constitution of Law, and the free market capitalist enterprise system of economy.

They believe in Socialist-Marxist Leninist Communism.. We do not..

The fact that you even give them an inch of any type of political compromise ground, in any form, only appeases them, and makes them see you as weak and easily rolled over. Just like the appeasement of Hitler in the 1930′s.. It only makes them more aggressive and emboldens them, in their wants of political ground and acquisition..

John was mocking the Obama lovers. He’s been a follower of this blog almost from the beginning and is libertarian/conservative.