Caught in the act

Caught in the act

Posted by William A. Jacobson Saturday, December 24, 2011 at 07:00am 7 Comments
More Sharing Options

I always wondered what I would say if caught in the act of photographing someone’s bumper sticker.

Probably will go something like this, at least if in Ithaca: “Hey, love the Coexist sticker, pass the Granola,” or perhaps, “Repuglicans suck, don’t they.  Dig the Tax the Rich sticker.”

Here’s what happened to Linda in Tennessee when she was confronted:

Professor, I had just photographed a bumper sticker at an area post office
today, and a young lady approached me and said, “I see you are photographing
my bumper sticker”. That’s the first time I’ve been caught in the act.
Then, she explained that she designed the bumper sticker based on Kid Rock’s
“American Badass“. I like Kid Rock’s philosophical outlook, although I’d
never actually heard the song, “American Badass”. So, in this instance, the
word “bad” together with a picture of a donkey’s hind end did not mean what
I initially thought it to mean. 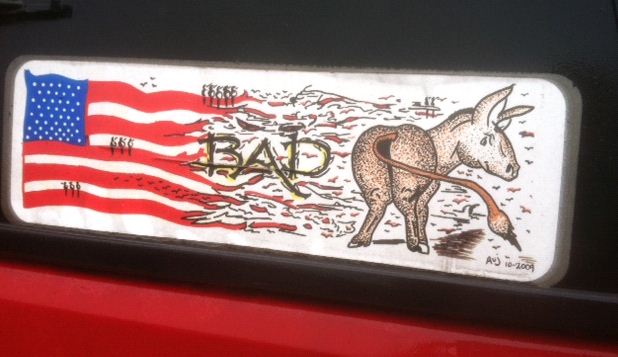 I like the initial thought better–it is so fitting.

O/T: newt is officially off the ballot in VA.

Wow, her art is wonderful! Thanks so much for the post and Merry Christmas!

Either there are a lot of LI readers who are prolific bumper sticker photographers named Linda living in Tennessee, or this one Linda deserves a Pulitzer.

I am Linda in Tennessee and all those bumper sticker photos posted by the Professor, and credited to me, were all taken by me – and you haven’t even seen those photos which didn’t “make the cut” and have not been posted here!

It’s a game for me, and my husband has become my “spotter” when we have lunch together.

When you begin looking, the variety of bumper stickers out there will surprise you.

I tried to take a photo of a lefty sign tied to a freeway overpass on the I-10 Freeway yesterday while in the fast lane … harder than I thought … it didn’t come out.

(Note: Don’t try this at home. I’m a professional. I have a license.)

Kudos, Linda. Above and beyond the call of duty!

I’ve tried to take photos of the car next to me in the turning lane; it just doesn’t work. Best to obey the Professor’s rule: no photos attempted while your vehicle is in motion.