Sure, you have called San Francisco granola city and have joked how a certain NY Times columnist might choke on his granola.

But did you ever imagine in your wildest imagination that someone would put a granola bumper sticker on her car?

Just “granola.”  It needs no further explanation.  In that one word and bumper sticker is summed up an entire political philosophy and way of life, and many a stereotype and joke. 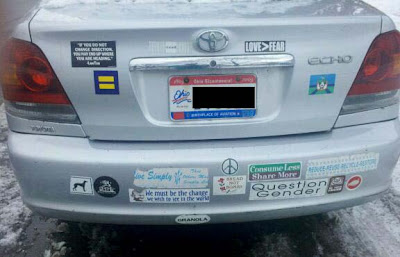 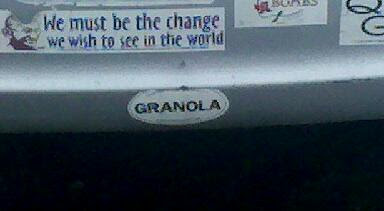 Bonus question:  What would you use for a one-word bumper sticker (a) for liberals, or (b) for conservatives?

One word bumper sticker for me, you make the call, "Jesus."

"What would you use for a one-word bumper sticker (a) for liberals, or (b) for conservatives?"

You see? This is what makes us traditionalists different from you neo-cons. We not only make our own granola, but we can eat it proudly while at the same time chuckling at both you and the liberals.

Uh hum. I might point out that the crazy granola sticker has an OHIO license plate. We gots no Whole Foods around here but we gots lotsa wackadoodles.

Professor, there are other bumpersnickers on that vehicle that are worth mentioning.

The narcissism of "We must be the change we wish to see in the world," is part and parcel of the O-bot phenomenon.

How about "Question Gender." I don't think they mean the gender of Latin nouns, either.

The leftists want to change "Father" and "Mother" into "Parent 1" and "Parent 2," evidently thinking that they can change fundamental human biology by "questioning" it.

The one that takes the cake for me, however, is "Live Simply That Others Might Simply Live." This expression sums up the left wing's economic illiteracy.

The moonbat who owns this vehicle evidently believes that if she can convince enough of us to stop buying things manufactured in Indonesia, China, the Philippines, and India, inter alia, the poor people in those countries will be able to quit their sweat shops and go home to an idyllic, idle life of loafing in hammocks while being caressed by tropical breezes.

In reality, however, if we stop buying the products that those people produce, they will simply starve. Or at the best, return to the grinding peasant poverty that has been their lot for millenia.

Leftism is evil. That's all there is to it.

I second the suggestion that the one-word difference between leftists and conservatives is Control and Liberty.

Oh for Pete's sake. The "granola" person is from my home state. Oh the shame…

a. child
b. adult

Buy two 'equality' (=) stickers, cut one and place it as a slash across the the uncut one. Not Equal.

I have a one word sticker. It says RKBA
I have another; it says Coexist, but the word is made up entirely of gun makers logos.
http://billllsidlemind.blogspot.com/2010/04/coexist.html

That photo of a car's backside just proves the adage "One bumper sticker means 'I've got an opinion," more than one says 'I'm a kook.'"

For the bonus question, Black Hound came closest IMO. Still, nothing beats "granola" for the libs.

In that vein, I saw a bumpter sticker the other day that said "I'm far too well informed to vote republican."