Chris Cillizza’s The Fix blog at The Washington Post presents itself as a political reporting blog, not an advocacy blog.  It purports to be journalism in a blog format.

That distinction in the mainstream media, of course, really doesn’t exist in the newsroom or the blog sections.  Except for blogs or bloggers who expressly are labeled “right wing” or “conservative,” one can assume a pro-Obama, pro-Democratic Party bias.  (And even the “conservative” bloggers are suspect, if you know what I mean.)

I’ve never had much of an issue with Cillizza’s blog; while I don’t claim to have studied it carefully, when I have read it I did’t notice anything more than the usual implicit bias which exists throughout WaPo.  (FYI, that’s a compliment.)

One of Cillizza’s co-bloggers, Aaron Blake, had one of those clarifying moments on Twitter today, in which that implicit bias was revealed explicitly.  Blake called for help from others on Twitter to find material Blake could use against Newt Gingrich: 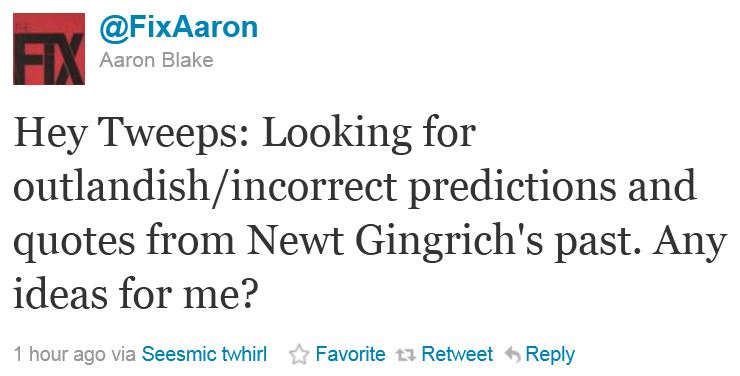 There were a number of appropriate responses, including these from Ace: 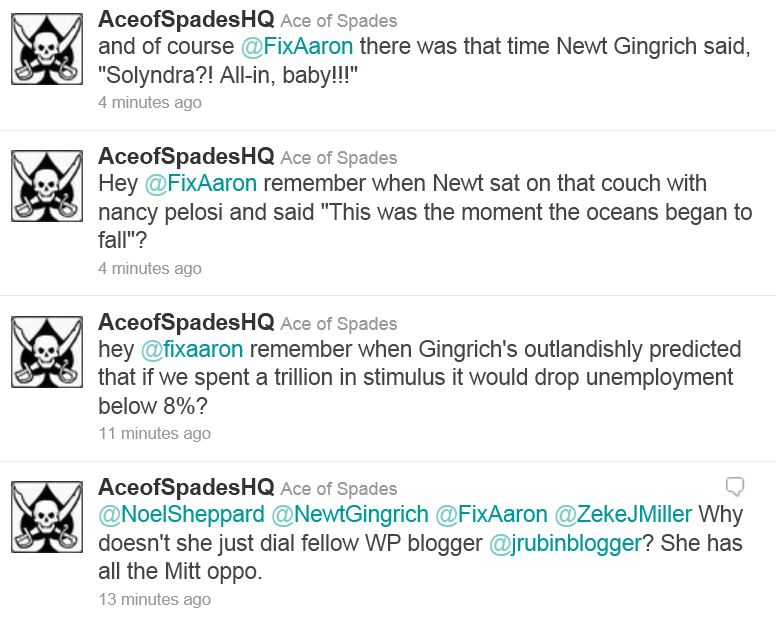 Reminds me of the time WaPo and other mainstream news outlets crowd-sourced Sarah Palin’s e-mails, and were downright giddy. Until they fell flat on their faces.

Update:  I had not seen this before the post, but it fits the theme, WaPo ‘Right Turn’ Blogger Trashes Conservative Media; Post Edits It Harsher for  Paper:

The Washington Post selected Jennifer Rubin as their “Right Turn” blogger,  which to many has seemed like the wrong title. It should be “Romney’s Turn.” But  when the Post publishes her blogs in excerpted form in the newspaper, they’re  making her even sharper in attacking the “hard right” of the Republican  Party.

In Monday’s paper, Rubin lashed out at the New Hampshire Union Leader’s  endorsement of Newt Gingrich by slamming the entire conservative media as “embarrassingly bad.” The Post’s gleeful headline is “Conservative media blow  another story.” But any nuance she placed in this attack on her blog was edited  out by the Posties.

Their goal is to get Democrats elected, their method is to destroy Republican candidates. They simply choose not to investigate D’s at all, and when a D scandal appears they ignore it as long as possible and then, if they must report it, they do so in as favorable a manner as possible to the D and in a way that they know will be seen/heard by as few people as possible.

The internet helps enormously. Fox News and Conservative talk radio have a big influence as well. But, all 4 Networks (yes, including Fox) broadcast socialist propaganda thinly disguised as news, and most of the major newspapers are thoroughly left-wing.

Funny you mention only four networks. I agree with your count but am certain Ted Turner would feel slighted.

I seldom use twitter but have debated firing it up just to paste the wons comments in there.

“Now that Newt Gingrich​ has become the latest in a series of Republican front-runners, he is getting the kinds of scrutiny and attacks that have done in other front-runners.

One of the issues that have aroused concern among conservative Republicans is that of amnesty for illegal immigrants, especially after Gingrich said that it would not be “humane” to deport someone who has been living and working here for years.

There is no inherent right to come live in the United States, in disregard of whether the American people want you here. Nor does the passage of time confer any such right retroactively.

“No one honestly believes the government should or will mount a nationwide manhunt to deport millions of people,” according to the Wall Street Journal.

What we have today is virtually the opposite of that. Cities that openly proclaim themselves “sanctuaries” for illegal immigrants put their own policemen under strict orders not to report illegal immigrants to the federal authorities, with the result that illegal immigrants who have committed crime after crime are free to stay here and commit more crimes, including murder.”

So tell me which of the candidates is going to deport every single person in the country illegally without exception? Bachmann and Romney agreed with Newt before they disagreed with him. Perry gives them a tuition discount. Since you constantly fill the comments with lengthy anti-Gingrich posts, I think it’s time for full disclosure on your part. Who are you supporting?

No candidate in their right mind is going to come out and declare for 100% deportations. Every candidate is going to be smeared with that charge regardless. The irritation comes into play because none of the voters who, on the morning of the election in 2012, will decide that immigration is an important policy are paying attention right now.

IMO, Mr. Sowell is looking for a candidate who will support enforcing the rule of law as is found in the Constitution and the USC.

Rubin = Frum
All my lefty friends like Mitt the best. They are all voting for Obama though. I just want to know the MSM obsession with forcing Mitt down our throats?