Poll – Romney and Newt tied up for lead

Poll – Romney and Newt tied up for lead

You can’t take a single poll on it’s own, but this CNN poll (data here) released at noon today does comport with the trend of Newt rising as Romney’s main challenger, and Cain feeling the effects of the negative publicity. 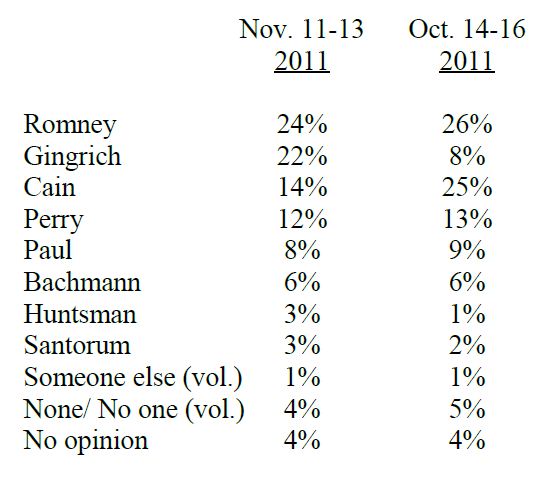 It looks like Gingrich has his opening. Can he take advantage of it? We’ll see now that the other candidates have an incentive to go after him — but Gingrich has played very graciously with everyone else in this race, and going negative on Newt might have a high risk of backfire.

And an Iowa poll shows Newt and Cain in a tie.

that’s good, because Huntsman is a Democrat plant…

Your wish is granted, Jennifer Rubin moved into attack Newt mode several days ago, and now is in a panic, “It may be just a matter of time before Gingrich joins the list of political suicides in the 2012 GOP presidential primary. ” http://www.washingtonpost.com/blogs/right-turn/post/gingrich-reactions/2011/11/13/gIQAJAujKN_blog.html

I am not so sure about these polls. I had two plumbers in the house while Cain was on TV. Both indicated that they supported him. These were two blue collar white men in Louisiana. While not a poll, their collective opinion impressed me.

I agree… It’s never good to jump on a spontaneous bandwagon. Just the fact that it’s a CNN poll raises doubt in my mind.

And all that favor Gingrich, don’t forget that he has a problem containing an over inflated ego. If he were to win the presidency, most of America would hate after eighteen months in office.

Lastly, I don’t want another lawyer in the White house. (No offense Prof..)

Any moment now the media will rerun a story on the “bad” Newt Gingrich from the Clinton era. Counting down in 5, 4, 3….

Gingrich is a very smart man. However, I just don’t see him as President, but he’d make an excellent adviser to one.

I say let the candidates take their turns at the top and let all the smears come out now. It will all be old news by the time of the general election. Especially with Newt, since they are all already old news.

First, the candidate has to beat Obama. If that doesn’t happen, what kind of president he/she is is irrelevant.

Second, Newt (or any of the Republican candidates) would be way better than Obama.

I question whether Cain is falling because of the negative publicity or because his handle on the issues is spotty at best. His knowledge of foreign affairs is particularly weak, and his inability to answer a question on defined benefit plans was troubling.

One thing Newt has going for him is that the massive amount of baggage he carries around is virtually all in the public record already. For my part, having watched all the candidates, my favorite is Newt far and away. I salivate at the thought of watching him debate Obama – and the MSM debate moderators. Pass the popcorn please.

“I salivate at the thought of watching him debate Obama – and the MSM debate moderators.”

I don’t doubt that Newt would do well against Obama even in a setting slanted for Obama. But does it matter?

The only people that really watch those debates are politcal junkies who will have been following the election so far. Most of those will have already picked who they will/won’t vote for by the time the general election comes, and the ones that don’t closely follow politics will be more influenced by the ads/news stories shown on TV. In that case even the slightest slip up by the Republican nominee will be “news” 24/7 for weeks.

Newt as the standard-bearer of family values and ethics? I’d rather vote for… who’s the alternative, again?

Can’t wait–really–for when Cain doesn’t win Iowa and the talking heads at MSNBC say, “See, told you they were racist.”

I have said this inevitability of Newt taking the Presidential candidate front runner status lead, was going to come about, for the past several weeks now..  and now it finally has.. The more the other crony capitalist Republican Party RINO’s open their mouths, and expose themselves as the inexperienced incompetent, inept, and ill prepared person to be the next President of the United States of America, thus the more Newt will rise with the tide.. as he is the only one on the debate stage, who is a serious Presidential candidate in all areas required in the qualification department.

There’s one big difference between Newt, and the rest of the field, Newt will not allow the media to manipulate him, because he is too well experienced and versed in the politics of the media to be played the fool.. Newt is the only one of all the candidates, who is consistent in his abilities to address and answer any question with ease, as he has vast amounts of knowledge, expertise, skill, experience, and wisdom, as well as being extremely articulate and precise in his statements. He has no fear of the media, and knows the how to play the media, more than the media knows how to play him..

Newt is by far, hands down, the best man to go up against Obama and his liberal propaganda machinery, aka, the MSM..

[…] Newt Gingrich is the solution for Republicans for reasons we have discussed before but the reason polls show Romney and Newt at least tied for the lead is because Romney endangers Republicans on the 1a issue of 2012 – the economy, jobs and the […]