Yesterday I saw a lengthy thread at Memeorandum about a “HermanCainPAC” website which had a large cover story calling Karen Kraushaar an “ugly bitch.” Here’s the screenshot: 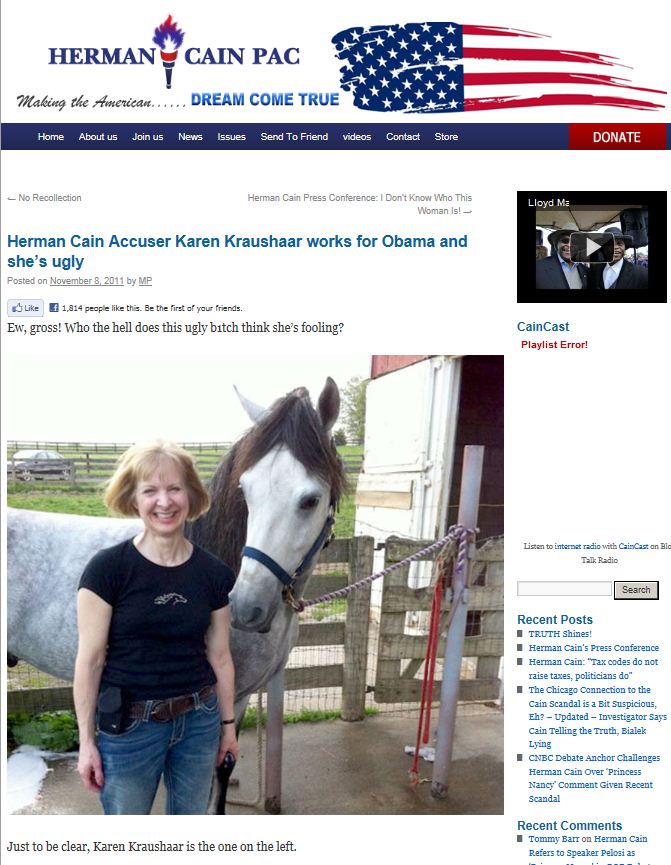 The website looked real, with a donate page and so on. But I didn’t post about it because it looked real but was not believable.

But it did invoke fury on the left, which went all in on calling Cain names about it.  Here was the reaction from Dave Neiwart (who invented the anti-conservative “eliminationist” narrative) at Crooks & Liars:

And they’re sooooo funny, too, “clarifying” that Kraushaar is not the horse in the picture.

Boy, I bet that convinces all the women out there, eh? Granted, it probably will work great with Republican men, who all seem to believe that only attractive women could possibly be sexually harassed. (This is particularly the case with “MP” at the Cain PAC blog.)

I guess less-than-perfectly-attractive women are just so desperate that of course they would be happy to give Cain a blow job.

EDITOR’S NOTE: Remember when the right-wing was against sexism? You know back when Palin was their media token?

And I was right, it was a hoax site, as Crooks & Liars now acknowledges:

UPDATE: It now emerges that this website is a hoax. Shuksan Tahoma at DKos has the details. We apologize to our readers.

Do sophisticated hoaxes take place to bring down a candidate? You betcha.

Are they always provable? Usually not, although there are suspicions as in this Ann Coulter column about the coincidence of David Axelrod saving Obama’s political career by digging up dirt on opponents and just happening to live in the same building as Sharon Bialek.

This is why we have to demand that light be shed on accusations against candidates, that accusers and files and facts come forward.  Taken nothing for granted or at face value.

It is somewhat easy to tell this was a hoax site, if you know the Herman Cain logo. The torch in Cain’s logo is more of a ribbon-flame, as opposed to the flaming thing in the banner on the hoax site.

I wonder if anyone contributed? And where the money went?

Most brutal webpage ever ……

I figured it was a hack of the real website – it never occurred to me the whole site was phony.

But it was obvious the post was fake – no serious campaign at any level (local, state or fed) would say something like that.

The left can behave this way without fear of retaliation or even much in the way of ridicule. Alinsky’s Rule No. 4. The worst thing about it is that there are numbskulls on the right who fall for it.

I wonder if the left did it themselves. After all, it’s a great way to keep the sheep in line. Keep providing the circuses.

I think “falls for hoax” is overly generous. How about “takes opportunity to repeat lies”. Isn’t it easy for some unknown “hoaxer” to put up some ridiculous nonsense and then give everyone a free pass to repeat and spread the lie far and wide. Then when they get called on it, they can just say “Ooops, silly me. Got hoaxed.” Emily Latella, call your office!

Is the website is a con or is it the work of an overzealous Cain supporter? It took a lot of talent and time to put it up and it appears to have been ongoing for some time with links to Cain new for month. The donate button leads nowhere. There is a real story here that should be pursued. If we had a press that acted as a press is supposed to act, it would be pursued. Who is behind the website and why?

No doubt Cain’s powerful attorney, L. Lin Wood (http://bitsy.me/http://www.washingtonpost), will pursue every possible lead to defend his client. Wood has won “eye-popping” damages for clients falsely accused of sexual harassment. Bialek has had numerous financial problems in her life. Those problems may now get even worse.

If that were real I would follow Cain to hell and back barefoot over broken glass, lemon juice and salt.

[…] post yesterday that got the left all up in arms has been found to be a hoax. William Jacobson has the details. I like he, decided not to post about this weird story that showed up on Memeorandum, mainly […]

Best line of the week:

“Do sophisticated hoaxes take place to bring down a candidate? You betcha.”

I do think the horse is the better looking of the two.

There is a lot wrong with this post–Mr. Jacobson’s, I mean. To start with the title: “Anti-Cain hoax exposed.” What is the evidence this is anti-Cain, rather than, as commenter nohype suggests, the work of an overzealous supporter? I am not aware of any evidence for the former; on the other hand, if one actually reads the Daily Kos diary entry that Mr. Jacobson is relying on (but I suspect did not read), one finds that the registrant’s administrative contact is a Clifford Hoelz, with an affiliated site of unitedconservativeamericanetwork.com. Check that site and search on Mr. Hoelz’s name and tell me if you think he is anti-Cain or not.

Moreover, there is the usual over-generalization about one’s opponents (“But it did invoke fury on the left, which went all in on calling Cain names about it”), completely ignoring the fact, as I said above, that it was A DAILY KOS DIARIST and her readers who actually unearthed some information about it.

This is typical of the sloppy work and blinkered thinking I have come to expect from this blog, and I don’t expect my notes here to change anything. I’d love to be surprised.