What is right about this Occupy Ithaca picture?

What is right about this Occupy Ithaca picture?

I attended the Occupy Ithaca rally today, which was scheduled as a mass peaceful demonstration starting at noon outside a Bank of America branch in downtown Ithaca

As of 12:30 p.m., when I dropped by, there were about a dozen people holding signs.  I kind of felt sorry for them. 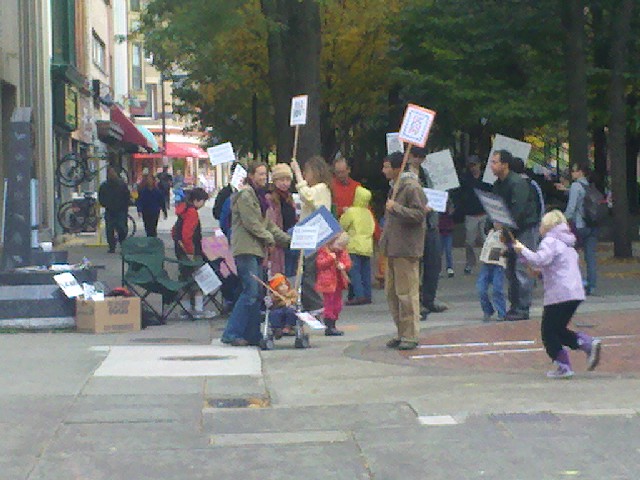 None of the usual hardcore Ithaca suspects were present, unlike an earlier Occupy Ithaca rally.  Maybe they would show up later.

There was none of the crazy talk, masks, or other anarchist/socialist rhetoric which permeates the gatherings in bigger cities.  What I found were signs which could have appeared at a Tea Party Rally: 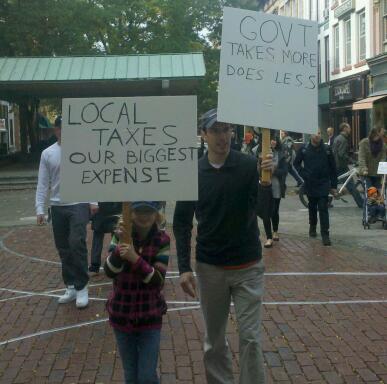 The difference, I suppose, is that Tea Partiers want to lower taxes, while these folks seem to want more for their taxes.

While the international organizers and some of the others behind the movement have bad intentions, we should keep in mind that there is common ground with some of the people innocently attending some of these events.

“these folks seem to want more for their taxes.”

Exactly. Corporate greed is bad. Their own greed is just fine.

Just slightly off topic, Professor: There is a new Twitter stream that mocks the rabid element of OWS. It is #YouMightBeAFleabagger. Like the #AttackWatch thread, some of the entries are hilarious, yet true. Check it out.

“I have shoes older than this kid.”

Who could wish for anything more helpful than an annoyingly loud, unkempt and unruly radical movement swelling on the left, one enthusiastically attracting support for a radical, or at least discernibly left-wing candidate for the Presidency?

Of course, I personally believe that at this point, Michael J. Mouse would likely win the Presidency against this guy Obama — even sporting his trademark three-fingered white gloves.

But if that ersatz tea party rally you attended in Ithaca earlier today was the best the “occupiers” could muster, then they’re quickly running out of steam.

Hmmm, while I see your point to an extent, people are responsible for finding out what is going on before they jump on a bandwagon. If these fine people (and they do look like fine people) want to protest high taxes, a government that is too large, etc., yay! So do I. So have I. But here’s the rub: anyone with a computer or cable (turned to Fox News, of course) can learn who is behind these “Day of Rage”/American FALL/Occupy protests. I have no sympathy for anyone who is clueless about what is going on or who jumps on something because it sounds “cool” or “historic.” Good grief, didn’t we have more than enough of that in 2008?

There is no way in the world that any amount of money or pressure or dissatisfaction with anything would make me join forces with self-proclaimed Marxists, socialists, communists, and assorted unions / “open border” weirdos who seek, and clearly state that they seek, to destroy America. And there is no way in the world I can dredge up any understanding of anyone who would do so. It’s madness.

Smitty, writing at The Other McCain, asks: “Can You Make Peace With Stupid?”

LOL …ya’ll are going to get a kick out of this one, not me but I like the way he or she thinks

Once these people, who I agree with in terms of limited fiscally responsible govt, realise that they are part of a movement that is actually based in anarchy, they will realise they are more aligned with the Tea Party.

So, good on these 2 in the photo, I agree they would be more aligned with the Tea Party (the real TP, not what the media protrays them as). The OWS, spitting on coast guard cadets, being confrontational with cops, disrespecting the rights of others, is nothing like the TP, and once the peaceful part of that OWS group realises that they share more in common with the TP, will see the difference and hopefully join the TP.

just poking around …did anyone catch this one

An angry Mayor Bloomberg blasted local politicians yesterday for strong-arming the owners of Zuccotti Park into reversing a decision to clear out encamped Wall Street protesters — and allowing the activists to claim a victory over the city.

“while these folks seem to want more for their taxes”

More likely they want more from someone else’s taxes.

[…] Whatever rational arguments can be made on behalf of Occupy Wall Street, the bottom line is that no one knows who is behind the curtain, manipulating with HOPE And CHANGE, the dupes and the wannabee dupes. Rest assured that if there is a YearlyKooks style “convention” next year it’s sole goal will be to nominate Barack Obama as Emperor Extraordinarious and Savior of the Nation. […]

The common ground you speak of should be capitalized upon by sane people in both movements. Only then will we the people be able to take our country back.

Another big difference is that we are an American grassroots movement determined to return to a smaller government accountable to the citizens and constrained by the constitution while the OWSies are part of a global socialist movement to impost their totalitarian “workiers of the world unite” government on everyone everywhere.

Although both are expressing frustrations at the failure of the status quo, we are fighting to get to two diametrically opposed destinations. Tea Partiers want to return to an America that used to work. The OWSies have declared the old America to be a failed design not worth saving.

Another difference is that we Tea Partiers offered a very specific solution to the very specific problems we were protesting. The OWSies are just whining about everything without offering any specific constructive solutions.

Oil vs water. Return to civilization vs return to the Dark Ages.

They are right that local taxes are the greatest burden to families and our economy. What they may not understand is that it is due to unsustainable public employee pensions and inflexible unions with too much power and no limit on how much they can take from the taxpayers. It will only get worse unless everything is on the table for reasonable adjustments, including current retirees. Until that happens, the choice is either cut programs, cut pay for current public employees, or raise taxes. It really should not too much to ask public employees for a reasonable negotiation for the common good of the community and economy as a whole. It is only an illusion that this problem can be solved by taxing a few rich people. In states like NY it is kind of like a positive feedback loop. The higher taxes get, the more private sector jobs are killed so those people move away, then there are more public employee voters who favor high taxes, leading to more private sector demise… I think NYS is in the end phase of this and ultimately will lead to financial collapse of the state. That is why they are now turning to “wallstreet” to save us because the local municipalities are already screwed and the local taxpayers are tapped out and just trying to take care of their own. Maybe the only hope for NYS is that we are so screwed we might hit rock bottom sooner than later and then we can get back to making sensible decisions instead of blaming our problems on fantasy demons.

“while these folks seem to want more for their taxes”

More likely they want more from someone else’s taxes.

Barbara beat me to it, fify