#OccupyWallStreet TwitPic of the Day

#OccupyWallStreet TwitPic of the Day 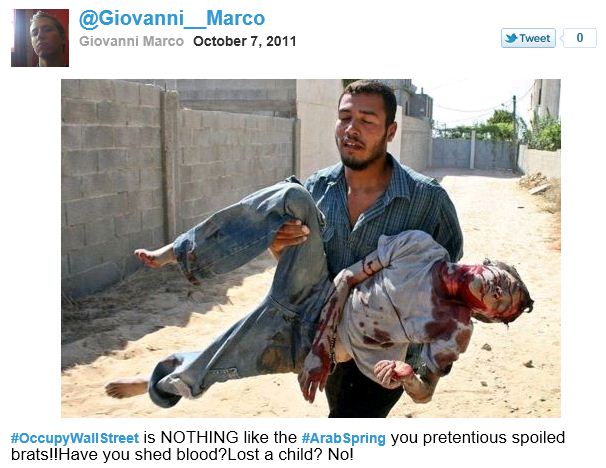 Yep. Unlike Neda, they do not need to fear being shot down in the street. they do not have to face down tanks.

The Tea Partiers braved the animus of the President, the then Speaker, and the media.

These punks not only do not have to fear that animus, there is ample evidence to suggest they are being sponsored by the President’s re-election team.

And – on a side note – to the well-paid reggae artist, who chose to wax poetic about #OccupyWallStreet, we, many members of your audience, are the 53%, who not only like your music, we pay the taxes, and we can afford the tickets to your show. We brought 12 people. And we don’t appreciate what you did. Funny thing is, neither did the kids in our party.

This, I think, is the most obnoxious delusion of all. The American people are not oppressed, living under tyranny, not in any way, by any stretch of the imagination. It’s not even a matter of moral relativism or equivalency (neither of which the so-called intellectuals can grasp); it’s a simple matter of fact. Look at the Iran ’09 uprisings, the current slaughter of demonstrators in Syria. Our people won’t be gunned down by the military in the street for the simple act of expressing their dissent. The hubris, the misplaced and delusional equivalency with the Arab Spring is embarrassing. And frankly, it completely undermines whatever message this disgusting mob might have.

We’re just like the Arabs? Oh really? We get our hands cut off for stealing or for some other “crime” against the Koran? We get buried up to our necks and stoned to death by crazed mobs? Gays are beheaded here in America? Women can’t drive or be educated here? Children are raped and disfigured here by demand of the state and law?

Those gross topless lefties would, literally, have their breasts cut off, in public, in many Arab/Islamic states. They would then be gang raped before being buried to their necks and stoned to death by random citizens. Homosexuals, after being gang raped by “law enforcement” would be beheaded on national television. Anyone who is not Muslim would be murdered, no matter how “advanced” in thinking their atheism.

It’s been agonizing to listen to interviews with these OWS people – embarassing to see what our education system has produced – Americans who have no clue what a great country they have been GIVEN and the opportunities they have. They take for granted that they can safely and freely speak their mind, with no fear… They are so self-centered that they don’t even see their hypocrisy and naivete – I guess ignorance must be bliss…

I’m sort of lucky in my old age, I’m nearly deaf so I can’t listen to these scumbags. This leaves me reading the news on the Internet. I’m even luckier in that I no longer have to get all my news from the CPUSA, er, mainstream media.

Here’s something I think about, a lot of NYPD officers come from cop families. I wonder what the bluesuit of today thinks when his dad and his uncles talk about all the fun they had back when they could get in a lot of stick time in these affairs back in the LBJ and Nixon Administrations.

They like using the Arab spring thing a lot…

Both OWS and the Arab Spring are in favor of Sharia Law, but otherwise I don’t see any comparison.

‘Arab Spring’ is a grass-roots movement to overthrow dictators for life, but will likely result in the Tyranny of Sharia Law.

OWS is supported by the .0001% hard left radical fringe, and even then requires astroturfing. Their purpose is to destroy the free market capitalism that is the foundation of our prosperity and replace it with the Tyranny of National Socialism.

OWS is much like this pic. Both are fake. This appears to be one of the Palliwood pics used to blame the IDF for something that didn’t happen.