Declaration of the Occupation of Perpetual Grievance

Declaration of the Occupation of Perpetual Grievance

The organizers of the Wall Street takeover, calling themselves the NYC General Assembly, have issued a Declaration of the Occupation of New York City: 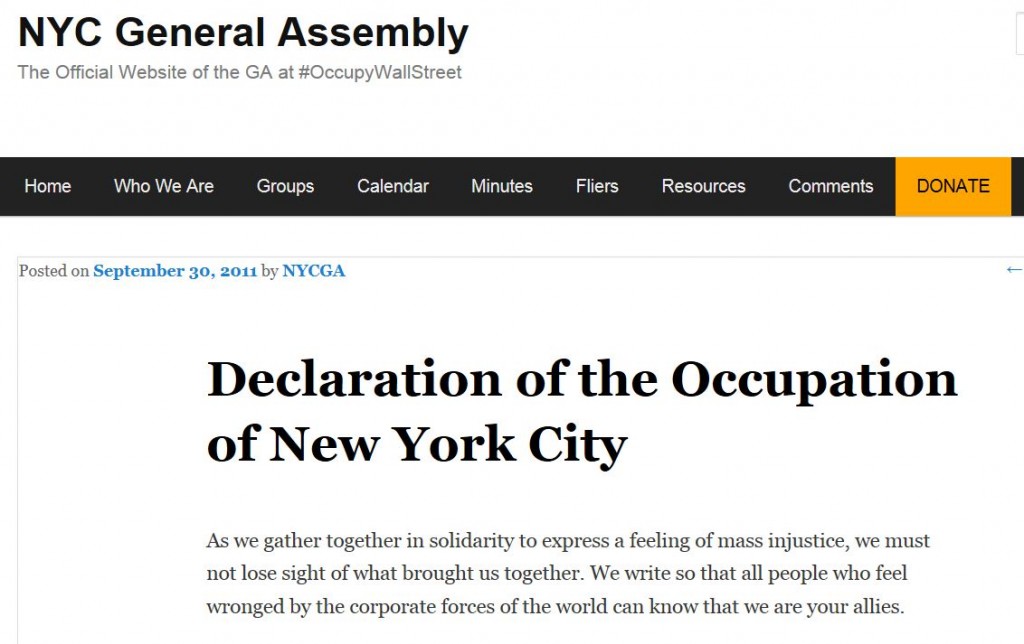 The Declaration lists 20 grievances against corporations, including these examples:

They have perpetuated inequality and discrimination in the workplace based on age, the color of one’s skin, sex, gender identity and sexual orientation.
They have poisoned the food supply through negligence, and undermined the farming system through monopolization.
They have held students hostage with tens of thousands of dollars of debt on education, which is itself a human right.
They have used the military and police force to prevent freedom of the press. They have deliberately declined to recall faulty products endangering lives in pursuit of profit.
They continue to block generic forms of medicine that could save people’s lives in order to protect investments that have already turned a substantive profit.
They have purposely covered up oil spills, accidents, faulty bookkeeping, and inactive ingredients in pursuit of profit.
They purposefully keep people misinformed and fearful through their control of the media.
They continue to create weapons of mass destruction in order to receive government contracts. *

It is what makes the Declaration of Occupation a living, breathing document, because the framers want you to know:

*These grievances are not all-inclusive.

It is the Occupation of Perpetual Grievance.

You’d think that somebody had passed a “mandate” requiring these folks to buy this stuff or some such nonsense.
Let’s just call it what it is …
Protest to Covet My Neighbors Goods

They do have difficulty distinguishing between voluntary and involuntary exploitation, don’t they? It is ironic that they prefer and advocate for the latter.

Do y’all notice something peculiar about this? Look at this little bitty here:

“They have perpetuated inequality and discrimination in the workplace based on age, the color of one’s skin, sex, gender identity and sexual orientation.”

There is no mention – ZERO, actually – about that freedom which was enshrined in our Bill of Rights first and foremost: the Freedom of Religious Belief and Expression.

Apparently, religious people have zero protections under these thugs. You can’t allow those “Christers” or “Jews” to thrive in their society, apparently…

This document is nothing but crap. In the end, they believe in nothing but power – and Mao’s gun barrel.

They have no mention of _any_ actual human rights in there.

A lot of assertions, and they generalize libel of people and cooperatives on a progressive scale. Reasonable people would object, and reject, universal statements of condemnation. They do a great disservice to their cause when their rage is selective and directed uniquely at people without authority.

Well, they dreamed of instant gratification, and failing to perform, they now list their grievances. It’s quite amusing, actually.

They have held students hostage with tens of thousands of dollars of debt on education, which is itself a human right.

I guess this includes all you “evil” folks at Cornell

Did I read that wrong ?
Was it the “education” or the “debt” that was a human right ?

Hey, NYCGA, if you don’t like any of the things today’s successful corporations are doing, then start your own damned corporation and compete in the marketplace of ideas.

Sheesh. It’s like the people who want the Boy Scouts to change their charter and allow gay scoutmasters. They should just announce that they’re starting their own scouting organization–NAMBLA Boys or Rainbow Scouts or something–and see how many people sign their sons up to be members.

Also, does the name General Assembly sound like the French Estates-General to anyone else? Just read Ann Coulter’s Demonic to see where these bozos want to take the country.

There. I think I’m done now.

As I keep saying, the left is incredibly conspiracy minded. These guys are taking as a simple fact that there is a massive conspiracy by corporations to do just about everything evil that they can imagine.

The all-knowing, all-seeing, all-giving government they wish for is also all-taking. What they don’t “get” is that governments are far more likely to oppress than the “evil” corporations.

Wonder how many of them are there on Mommy and Daddy’s Amex?

The Middle East has its “Arab Spring” and we have our “Airhead Spring.” Nothing like a good uprising.

The “Austrian economists” like Mises and Hayek talked about the concept of consumer sovereignty. Consumers decide which products, companies and industries succeed and which ones fail by voting every day in the marketplace with our dollars. At least that’s how it worked before we had the government picking winners and losers with crony capitalism and corporate welfare. You can see examples of it almost every day if you look for it.

For example, Eastman Kodak was a high growth company in the 1960s and 1970s. It’s stock was one fifty other stocks referred to as the “Nifty Fifty”. Everybody wanted to own it. Just yesterday, 138 year old Eastman Kodak announced it had hired law firm Jones Day to advise it on a corporate restructuring. It’s stockholders have essentially been wiped out, trading for under $1/share. EK could not stop the Schumpeterian forces of “creative destruction”. CONSUMERS preferred digital photography and EK could not adapt fast enough. It is consumers who chose to essentially put EK into effective bankruptcy by shifting their purchases to other technolgies. If you go back and look at the old Nifty Fifty, many of those companies no longer exist. They have either been forced to merge with other companies to survive or they have gone bankrupt, and in some cases even liquidated.

What the Left doesn’t get (or at least pretends not to get) is that wealth is dynamic, not static. Just as EK shareholders have been wiped out, the founders of Facebook and Google were struggling college students 10-15 years ago. Now they’re mega-billionaires.

Amazon and Apple have already put Borders out of business because CONSUMERS decided they valued buying books with their e-readers than having to slep into a Borders to find a book (and pay more for it besides).

We’re streaming movies and videos to electronic devices and putting retail stores that rent videos out of business. Who wants to be in the business of manufacturing VCRs today?

Raise your hand if you want to be either a manufacturer or a retailer of music recorded on 8-track cassette tapes or vynal record albums today. How music is recorded and distrubted has changed at least 4 times in my life of less than 50 years. Tower Records was a big deal when I lived in NYC. I don’t think it exists today.

I saw Michael Moore at the Occupy Wall Street protest whining about how the “greedy” corporations have destroyed his hometown of Flint, Michigan. As always, Moore has it wrong. It was the “greedy” CONSUMERS who didn’t want to buy enough of what GM and Chrysler were selling that created the hardship for GM, Chrysler, and the people of Flint.

That they don’t understand it or refuse to accept it is another enormous black mark against the educational establishment in this country.

SoCA Conservative Mom in reply to MaggotAtBroadAndWall. | October 1, 2011 at 2:00 pm

Swooning over what Maggot said.

I’d like to know what covering up inactive ingredients means.

It means they demand to know what their dealers are cutting their cocaine with.

This is just a list of, “I heard somebody say they did this and I don’t like it” kind of garbage. If you ask for proof that these things have actually happened, they’ll give you one case – or more likely, one slogan. (“What about Haliburton??”)

I especially like the one about using the military and police force to suppress freedom of speech. If it were true, wouldn’t this protect be suppressed, too? If everything else those horrible corporations do is as effective as suppressing these people, then they can be safely ignored.

Protesters and logic don’t go together.

There are vast tracts of land the world over that individuals or small groups could disappear into and no one would even notice. Once there they could easily shrug off the majority of whatever corporate chains they believe themselves to be burdened with and live out the rest of their lives in independent bliss.

This is the funniest thing evah! Who covered up inactive ingredients? Who are these fascist Nazi capitalist free marketeers [insert other ideologically-incompatible systems]? They must pay . . . and to make them pay, we will make them sit and listen to our incoherent, inherently contradictory list of grievances . . . or possibly demands. We’re not sure. Yet. We’ll get back to in a couple weeks. Dude.

It’s got to be painful to be obsessed with this unrequited romance of protest. At least real protesters can demand a specific action, i.e. “stop the war,” or “end segregation.” This crowd has to make up vague, bogus grievances with no identifiable remedy. If everyone stopped doing everything, would they be satisfied? Of course not. That would offend them too.

I work on Wall Street, you have just got to see it in person! Trust fund babies being dropped off in SUV’s to hang out in a private park and eat free food, what a life!

The protest signs are great- “Jobs are a right” makes my day, as does “tax the rich”. Every day the NYPD lets the occupying army out of their little fenced-in pens for a run around the block to wave the signs and chant. Their bread line looks like it is run by NYC’s best and brightest union and community organizers, no workplace discrimination here (no white folks or old people need apply). After a brisk walk it’s back to the pens, er, park, for some donated pizza and whole-foods purchased goodies. What a life.

Maybe it’s just me, but each day the police department’s metal fences claim a bit more land. Broadway and the stock exchange have been reclaimed by capitalists, and the Wall street bull is once again petted by tourists all day long. Hey, if it wasn’t for their President these kids would be working, probably for the same corporations their parents own stock in. Bah!

Had fun poking fun at these guys a couple of days ago:
http://teresainfortworth.wordpress.com/2011/09/27/start-the-revolution-without-me/

(Somehow they found me, so I’ve been fending them off today….)

I guess I am lucky that I did not have parents pushing me down the college path. Many of the people that I know who complain about high student loan debts came from the more well off families in my small town, whose parents were pushing them down the college path right after high school. Many of them pursued very expensive fluffy degrees while their hometown underclass pursued real jobs and perhaps later returned to college when they had a more solidified career oriented vision of what they wanted out of college. When I went back to college I didn’t waste a dime and I was determined to get every pennies worth out of every class. Why should I have to pay off the student loans of those who made their own bad choices. I have heard people brag about buying a car with their student loans. They are not my problem. There are enough bullshit requirements for a college degree, maybe they should scrap some of the ——Studies requirements for a class that teaches about personal responsibility and finance, and perhaps another class that teaches how decisions lead to consequences.

Never before have so many had so few cares and so little to do.