Thanks to all the readers who have been sending bumper sticker photos.

One thing I’ve noticed is that a lot of drivers are willing to express themselves is quite vehement terms against Obama and Democrats.  Has the fear of getting keyed or worse worn off?

This is in Minneapolis, land of the loons.  And I don’t mean the State bird, either.

I’m wondering how long this guy drove his “smart” car before the windows got busted.

When I was a litte hesitant, Tammy followed up:

I thought you wanted to share what people are really feeling across the country.  And I live in liberal Minnesota, so that guy/gal has BALLS.

I’ve seen many other signs while driving through Iowa and Missouri. I plan to take more photos.

She convinced me.  It’s certainly no worse than the anti-Bush, anti-Cheney, anti-Palin, anti-Republican and anti-Tea Party bumper stickers we’ve seen here.  Why did I even hesitate? 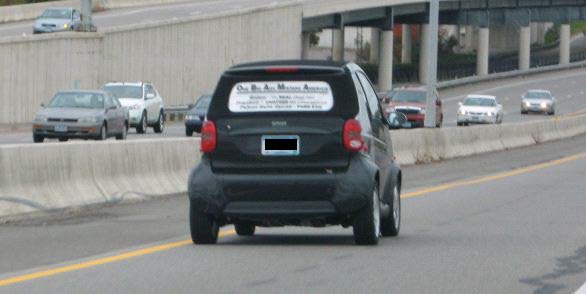 Yeah, why did you hesitate? I’m confused! Everything that car sign says is true.

I might also note that it’d be easier to take down a big sign like that from a back window once you parked than getting rid of a bumper sticker. I wouldn’t trust anyone near my leased car if I had an anti-Obama sticker.

That said, I have TWO pro-Obama friends who had their bumper stickers vandalized. Not a big fan of messing with others’ private property.

The irony is that it is on a “Smart Car” rather than an SUV.

I hope he’s packin’ … those union goons, um, “representatives” tend to be a little aggressive when expressing opposing views….

You sure wouldn’t see this in Chicago! Would LOVE to see it in Chicago, though! Why the hesitancy in sharing it with readers? It really is NO different than any other anti-politician bumper sticker. What makes Obama so special that it couldn’t be shown. I have to say, i’m a little disappointed in the hesitancy. If you don’t stand for something, you will fall for anything…that is our school motto!

I hope Tammy followed your safety rule to take that highway pic! 😉 Also, I would think that is a see-through back window sign; if it weren’t, it would block driver vision. Here in VA that would be illegal. Not sure about MN.

Love this one: Biden – the real village idiot”. Ha!

It’s a great ‘sticker’, but the most delicious thing about it is that it’s on a Smart Car!

Minnesota is the home of the DFL, so there is a long-standing tradition of lunacy. I face it every day with my in-laws.

The state is similar to many others though. The urban areas are heavily democrat (also much more dependent on government largess) while the suburbs and rural areas are generally republican (independent earners).

There is a reason why the booming number of food stamp recipients are good news for democrats, they are trying to expand the urban area outward.