The only surprising thing about the attack on Althouse

The only surprising thing about the attack on Althouse

One of the usual anti-Scott Walker suspects hanging outside the Wisconsin State Capitol in Madison didn’t like the fact that Ann Althouse was filming the moonbats tooting their horns, so he decided to try to grab the camera from her, grabbed her as well, and in the attempt was pulled off by Althouse’s son.

Nothing surprising here.  Thuggery has been the modus operandi at the Madison Capitol for months, with Republican state senators chased down both individually and as a group.  Althouse and others also have received threats.

When the police finally showed up, they threated to arrest not the perp but Althouse’s son.

Nothing surprising here.  The police unions openly sided with protesters, the Dane County Sheriff announced that his officers would not act as “palace guards,” and there was widespread police tolerance of mob rule.

So, all in all, there was nothing surprising to me about the incident.  Except for one thing.

I thought Althouse was taller: 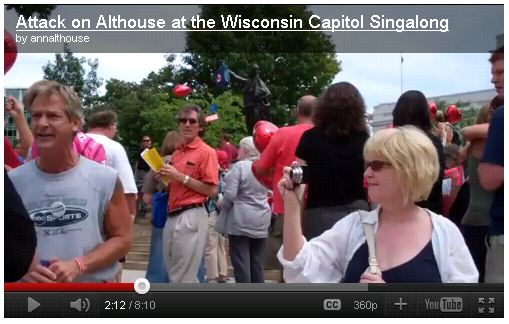 LOL! The first thought that entered my mind was, “My goodness she’s tiny!”

Scientifically speaking, there seems to be an inversely proportional relationship between how loud and obnoxious these people are and the substance to their arguments.

LukeHandCool (who would only add, Dude, wear a shirt with sleeves if you want anyone to take you semi-seriously).

As I’ve thought occasionally of going out and videotaping events such as these and others that occur nearby (most often in front of the federal building), what is the law regarding videotaping or taking still pictures of someone in public (at a public event like this) who has made it known s/he does not want his or her picture taken?

LukeHandCool (who, although he might be a little bit dumb, is not totally stupid … and would thus wear a Che Guevara t-shirt or something similar to ingratiate himself with any lefty protestors to encourage their real opinions on videotape … and not the Legal Insurrection t-shirt he keeps meaning to buy).

In America, you generally can film things which take place in public view, but you live in California, so the rules may be different.

A difficult question to answer these days.   Abuses abound in the ‘War on Photography‘.
.

You can photograph anything. Mostly it is legal. But the fact that you didn’t violate any laws doesn’t mean the police and local prosecutors won’t prosecute you if they didn’t like what you photographed.

It isn’t difficult to charge anyone with any number of charges, ruin your life and drain your bank account fighting trumped up charges.

Hmmmm. I was going to say, “Professor, any good footage I might get is yours.”

Now I might say, “Professor, any good footage I might get is yours if you represent me in any related lawsuit.”

LukeHandCool (who would probably show up first in a Che t-shirt to get the useful idiots’ candid anti-America comments on film first … then change into his Legal Insurrection t-shirt for the action scenes).

Don’t know how tall you thought Ann Althouse would be, but in that frame that shows, note that most of the people in that picture are standing on steps. Later in the video she appears to be taller than the loudmouth in the gray shirt,and is the same height as the police officers.

This little lady (and her family) might need some personal security, and she better keep her eyes wide open when back in the classroom this academic year at Univ. of (Commie) Wisconsin. The Widener Law School treatment might be what these leftist are plotting for her – or worse. Can you say set-up? Can you say Chicago-thuggery?

Nothing is beneath these leftist low-lifes. Ruining a sterling reputation is elementary for these thugs.

Ms. Althouse, please watch your back. And your family, too!

“what is the law regarding videotaping or taking still pictures of someone in public (at a public event like this) who has made it known s/he does not want his or her picture taken?”

People doing overt acts in a public place have no expectation of privacy. No one can force you to avert your gaze in such a setting, and filming is merely documented observation.

You really need to dwell on the fullness of the phrase ‘in public.’

[…] and hate-tactics being promulgated by the “progressives” in this country, we may be headed that way. For example, Wisconsin pundit and citizen reporter was attacked yesterday. This potential threat […]

I thought her reaction to the “attack” was a little studied. Didn’t quite ring true, to me, but that might be just because she was surprised. And I’m thinking with all that’s going/gone on in Madison this year, maybe a little naive?

Definitely could use somebody else to rely on for site security besides Wisconsin LEO’s. They seem to be in the tank for the Dhims, so prudence suggests one make other arrangements.

LukeHandCool might consider most good video set-ups provide clearer/more usable segments and recordings than many hand-held cell phones being waved in one’s face, even though the real cameras are positioned a more discrete – and defensible – distance from the subjects being recorded. So unless one wants to wave a red flag at a bull, the cell phone camera seems better suited for inanimate objects, not cantankerous and spontaneous individuals. Just saying.

More likely that she wasn’t surprised. These sorts of things have happened enough that if you go to film a left wing rally, you need to expect them and prepare accordingly.

I am more and more conscious of the growing necessity to exercise my right to keep and bear arms. I live in an open carry state and with all the violence coming from the left I am not longer sure I can count on the police to keep the peace.

“I thought Althouse was taller”

The thugs will no doubt learn she’s tall enough. The police too, if they aren’t careful.

If they do want to serve the public, then they can leave, period.!!!

[…] possible arrest. William Jacobsen noted that when the left packed Madison a couple of months ago, the police were very conspicuously absent as well. I guess public sector union members of a feather flock together.I’m not at all […]

Progressives are for free speech, so long as it is what they espouse. Anything else is not tolerated.
What no longer surprises me is that they can look you in the eye and spout lies that are patently lies. There is not an iota of truth in what they say.
Where is Obama and his calls for “civility”? Playing golf or hoisting a few with his brothers?