I’ve heard him called a lot of things

I’ve heard him called a lot of things

but not a “golden calf.” Or am I misreading this? What means it, says you?

Thanks to reader Linda who spotted this message Sunday in The Tennessean. 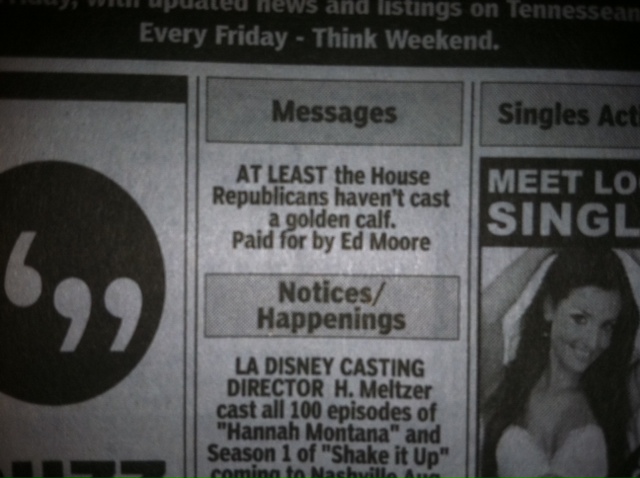 I believe they’re calling Obama a false idol, or false God. Likely because of the god-like reverence with which so many people saw him two years ago.

I think they’re more likely indicating that the Republicans are backsliding into idol worship while ‘Moses’ is on the Mount getting the commandments.

Who he thinks represents ‘Moses’ is anybody’s guess.

It could also mean that the Republicans are showing restraint while waiting for the return of their ‘Moses’. Unlike the story of the Israelites in the Bible. (however factual or correctly recorded that may be.)

It means Ed Moore is an idiot.

Certainly snarky … I’d bet it’s a progressive type, lambasting Republicans that cling to their religion and their guns. But then he’d be claiming Obamassiah is getting the real revelation from God? Or is Boehner going up the hill to talk to God (Obama), while Tea Party repubs consider a third party that believes in gold(en calf)?

Or is the author a Tea Party guy, fed up with politicians that always sell us out by worshiping more spending (but that would be a paper calf, not gold backed). We send a CCB bill up the hill, but it is Reid/Obama that cause that bill/tablet to be broken.

The only real bill is Cut Cap Balance, which the (godly) people want, but the idolators on the hill will not worship. That rearranges the Bible story a little, but puts “We the People” closest to the voice of God. Our government tries to become as gods, when they are supposed to listen to us.

Only Ed Moore can tell us what he really meant.

I believe Ed Moore is saying the Democrats have cast their golden calf representing Big Government – their idol; however, the Republican House has not caved, so they haven’t cast an idol to Big Government. They won’t bow down and worship the idol of Big Government. Similar to the Torah/Old Testament, when the Hebrews did this at the base of Mount Sinai while waiting for Moses to descend with the 10 Commandments.

Pasadena Phil: Please explain and support – why do you think Ed Moore is an idiot? I look forward to your rationale of the simplicity of your ad hominem.

Maybe he means: when The One summoned Boehner to Mt. Sinai, the House Republicans did not slip back into false idol worship by casting a golden calf; they remained faithful while Moses was on the Mount – and passed Cut, Cap and Balance.

Maybe, maybe, maybe. Who buys ad space to plant a cryptic comment? This has everything to do with Ed Moore’s ego and nothing else.

Whatever his true meaning, he felt strongly enough to actually PAY to express his opinion, as opposed to – you know, wasting the time to post for free in order to call a stranger an idiot at no personal cost to his wallet.

Maybe I should start charging for people to call strangers idiots?!

That message is only an ink blot on newsprint. I see US Representatives/ MDs Ron Paul, Tom Price and John Fleming refusing to practice veterinary medicine for Auric G.

I’m inclined to agree with Midwest Rhino. This guy’s a progressive type that is upset with those knuckle-dragging intransigent Tea Party types that won’t forget about the “silly pledges they made before the election” not to raise taxes (I believe this is how the Petulant Boy-King Obama referred to them in his tantrum, uh, press conference on Friday evening. He’s mad at them to, because they’re standing in the way of “progress”). They’re worshiping their “no tax increases” god – but at least they haven’t built a graven image yet.

He is suggesting the House Republicans are unwilling to compromise their beliefs. They are are devoted to ideology above all else.

While waiting for Moses to come down from Mt. Sinai, the peole folded and started worshipping the golden calf. What this guy means is the republicans haven’t folded yet. That in all this hooha, the republicans are holding the line.

Well, whatever was meant to mean, it has obviously failed in its objective.

Voyager. How has the message failed in its objective?

I know Ed Moore. Ed Moore is a friend of mine. Lives in Nashville too. Same Ed? I’m not sure. I’ll have to ask. 🙂

If it helps identify Moore the paper is very likely published in or near Kansas City, Mo.

My take on it is: “Well, the Republicans in the house haven’t puked in the punchbowl yet”. In other words an acknowledgement that what most of us expected to happen because the GOP held the house, hasn’t. Yet.

I might add the credit [so far] for the “non-fail” has to go to the infusion of Tea Party blood into the Party of Failure.

Amen. But for the voices of Allen West of FL, John Walsh of IL, Mo Brooks of AL, Marco Rubio of FL, there would be nothing to celebrate from the spineless, career RINO pols who hold office. Strong words, but the actions or inactions of those speak for themselves.

“The sky is blue”

Boudicca: “No the sky is actually turquoise”

Boudicca: “But I know how blue it really is”

Yeah, that’s what’s needed here. Arguing about the true meaning of some guy’s cryptic ad in a local newspaper like it’s sssooooo important to be balanced and nuanced in the discussion.

You love the perception of thought
Whilst conveying none