The day is young, but I think this one by Jazz Shaw is going to be hard to top: 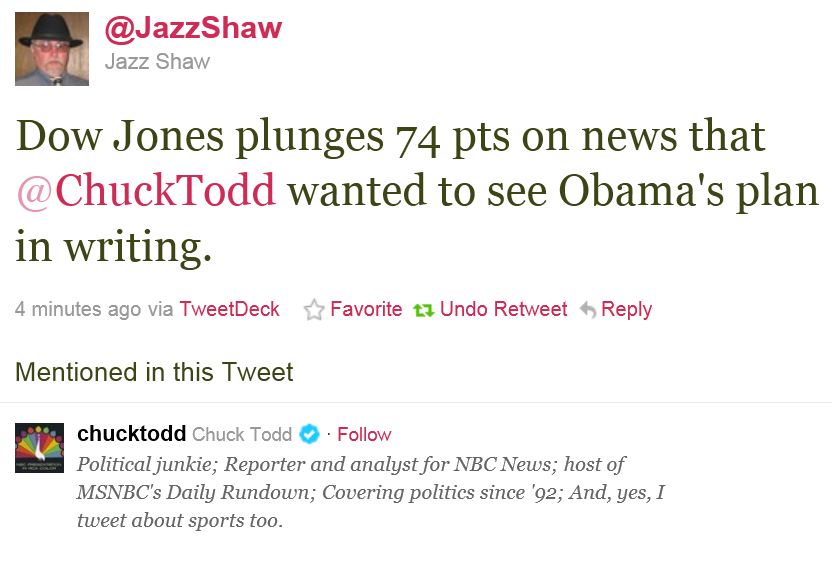 Looks like it’s time for @iowahawkblog to man up.

Thus providing even more evidence of my point that the Republicans are now in a political position to win this one big-time, unless they should inexplicably choose to somehow snatch defeat from the jaws of victory.

I watched that clip (ht, HotAir, here) of a flustered Carney first attempting to explain to Todd that Obama had actually quite patiently outlined the details of a plan, and that Todd and others had apparently failed to write those details down!

When Carney was immediately called on that one by all assembled at the presser, he then attempted to explain the political reality — “you know how things work in this town” — detailing why Obama had not made a CBO “scoreable” public proposal because it would have just been politically attacked!

It really was comedy delight.

Well, come to think of it, maybe not.

I suppose if it weren’t so damned serious, and if the President (through his press hack), and Harry Reid weren’t playing chicken with our nation’s financial future, then I suppose we could all have had a good laugh at their childish mendacity.

Boehner’s plan is not a compromise. It was written for the tea party, not the American people. Ds will not vote for it.

If “Ds will not vote for it,” where’s the compromise on their side?

The Democrats and the left are trying to do two things in the debt ceiling debate. One is to bake in their spending spree of the past three years as the new normal, despite the fact that it’s unsustainable. Another involves a strategic strike on the Tea Party to hurt the GOP. At least part of the Democrats’ strategy in the debt ceiling debate is about slicing the Tea Party away from the GOP to either demoralize it heading into the 2012 elections, or cause it to mount third party runs against Republicans. That’s what this sort of rhetoric is about.”

The Democrats will let the nation default…..
and when they do… the voter rage will be taken out on them like it was in the 2010 midterm elections

….with a statement from harry reid like this….
the answer clearly seems to be: hell yeah!