Hey Ed Rollins, you deal with it (Part 2)(the start of a series?)

Hey Ed Rollins, you deal with it (Part 2)(the start of a series?)

Maybe this will become the “Hey Ed Rollins, you deal with it” series, after Part 1 regarding the foul Rolling Stone attack on Michele Bachmann went over so well.

This is how they do it, but you know all about that Ed, because you did it too: 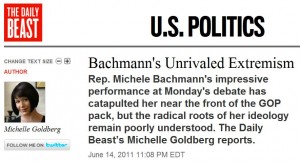 “Extremist” and “radical” are in the “i”s and first person of the pen holder. How can the trashing of a politician or another commentator that either more or less accurately summarizes or intentionally mischaracterizes another’s viewpoint but in hyperbolic, and often vile and poisonous, terms not be a demonstration of extremist and radical politicking on the part of the writer? Either one is rational and moderate in one’s approach to problems and criticism, or one is not.

BTW, am not making the case for moderation in all events, only for consistency, honesty and a modicum of self-awareness when critiquing.

Rollins lost his relevance, his cachet, and his ear years ago. [Too mean?] He can’t hear the thrum of a certain deep politics the rest of us hear and soon to be apparent to even the most tone-deaf. It’s not enough to be on the payroll of a conservative candidate; one shouldn’t cannibalize other suitable candidates by attacking their supposed extremism and limited wit in ways that frustrate the eventual success of a limited government agenda.

[Hey, are there Preview and Edit functions for commenting here?]

Bachmann is going about the “feel” of her campaign entirely the wrong way, if she wants to shed the “fanatic” label the MSM seems to want to stick on her. When somebody is trying to paint you with a label, the last thing you want to do is lay on a couple coats of primer for them. When Rollins went nuts on Palin, he should have been *fired* right then and there, no “felt it was time to spend more time with his family”, just a pink slip and a walk to the door with a cardboard box of stuff.

Sad to say, I contributed to Bachmann’s campaign last year and was a big fan. My eyes opened when she stood by and said nothing when the press went after Palin for the Tuscon murders and then again with the Rollins attack. Where are her principals?

He’s someone who not only drank the Obama Kook Aid but dove head first into the ‘hope and change’ well they were drawing it from.

The Professor Takes Politico To Task for Bachmann Hit Piece | insignificant thoughts | June 29, 2011 at 7:52 am

[…] told myself I wasn’t going to do this, because it’s Ed Rollins’ job, but the blatent bias of Politico’s article, Michele Bachmann’s thin legislative resume, […]