Paul Daniels is a famous British magician, who among other things, performance a Crusher Illusion:

But it’s going to take some special magic for Daniels to win the Saturday Night Card Game tonight, because Daniels stands accused of racism for these two tweets he made a couple of days ago joking that the term “Brit” should not be used since “Paki” also was a derogatory term:

These seemingly innocuous tweets, questioning why one ethnic abbreviation is acceptable while the other is not, have landed Daniels in a controversy from which he will have trouble escaping. 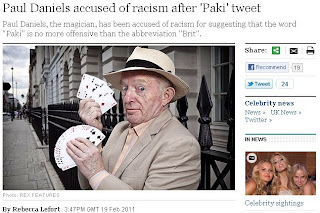 As reported by The Telegraph, Paul Daniels accused of racism after ‘Paki’ tweet:

Daniels, 72, wrote on Twitter during the Brit Awards ceremony last week: “What’s this about ‘Brit’ awards? Surely not? Isn’t that like calling someone a ‘Paki’? Not PC dahlings.”

He quickly added: “Hey, all I am saying is that I don’t understand why one abbrev is OK and another isn’t. It’s all how you say it surely, not the ab itself.”

Sam Tarry, campaign organiser with the anti-racism group Searchlight, said: “The word ‘Paki’ is offensive and racist, it is not something that can be compared to the word ‘Brit’.

“It has been used not just to define people from Pakistan, but Asian people in general, and it has a long, nasty history. In the 1970s people used to talk about ‘Paki-bashing’.”

In response to someone who called him racist on Twitter, Daniels struggled to explain that merely mentioning the word “Paki” was not the same as using the word in a derogatory manner:

Daniels should have learned by now that logic and reasoning are no escape in this politically correct world.
In the future, when talking about that word which starts with “P” and ends in “i” and is considered an offensive ethnic slur by some, Daniels should use the phrase “the ‘P’ word.”

Wait, that will not work, “P” already is taken. [link content warning]

Uh-oh.  I knew this day would come.  We’ve run out of letters to substitute for bad words.

How do we get out of this one?

In the future, every word will be a single letter followed by "-word" for 15 minutes.

"Sam Tarry, campaign organiser with the anti-racism group Searchlight, said: "The word 'Paki' is offensive and racist, it is not something that can be compared to the word 'Brit'."

I dunno, I think the guy has a point about "Brit." It may be mildly derogatory but it is definitely somewhat negative — kind of the way that "Limey" was way back when. But of course, no first world colonial people are allowed to feel victimized.

Brits are typically pasty white and are therefore not included on any "-ist" or "-ism" victim group. Daniels must not have read the memo.

Now if we could only get the Brits to quit referring to Americans as Yanks.

Prof. Jacobson, please don't ever link to Perez Hilton again…I wanted to see what the hubub was about the other P-word and had to go to his loathsome site. I am no prude but let's not go there again, shall we?

If this guy is really such a great and famous British magician, couldn't he devise a trick to make all these insufferable lefty speech police disappear?

I'd fly across the pond and pay good money to see that.

They're not Brits; they're whinging Poms.

And youse all are bloody Seppos.

There. Now we're ALL victims.

it is like saying the word Yankee (though I don't mind being called a yank) and it has a long history of being a derogatory word for Americans but you don't see anyone complaining about it.

'Paki' was originally 'PAKI' an anagram used in Britain to refer to young fashionable South Asian women, many of whom are very good-looking but extremely haughty. It meant "Pretty and knows it". Its first recorded usage was in 1965 by one Reg Gorringe, 17, a plasterer's apprentice, when he tried repeatedly to chat up an Indian bird at a bus stop in Crewe. During the Seventies it became generalized to mean any person of either sex of Indian/Pakistani appearance and was widely used by Neo-Nazi groups as a racist taunt. Hence its subsequent fall from grace.

Some years later Reg changed his name to Regina and underwent a sex-change operation. He was last heard of (early nineties) working out of a transport cafe situated between junctions 11 and 12 on the M25.