Obama Jobs Strategy In One Sentence

Obama Jobs Strategy In One Sentence

Thanks to @DDsModernLife for pointing out this comment by reader A. Dumas, in response to my post Houdini Economics: 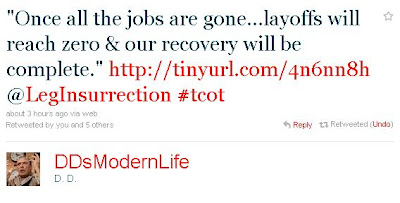 Or, as more and more people looking for work abandon their search, the unemployment numbers will drop to zero, and ipso facto, everyone will have a job.

The Endless Recovery Summer. Surf's Up! (even if jobs down).

Since Pelosi, et. al., believe unemployment checks are the best way to stimulate the economy, with everyone out of work the economy should be booming in no time.

I often read the left denying the constitution's validity based on the "three fifths" phrase. I wonder what they make of the DOL's "official unemployment number", that excludes so many?

I usually make a snarky comment on posts about Obama, but nothing I say could possibly top this one 🙂

Hey, if this includes GOVERNMENT jobs, I'm 100% behind it.

Remember Nancy Pelosi flying around on her broom, endlessly shrieking at W about his "jobless recovery" where we had that unacceptable 5% unemployment?

Creating jobs is easy. Creating productive jobs is hard. If we wanted to merely create jobs, we could do things like changing the rules for operating elevators.

Of course, this would make us all poorer, but everyone would be employed, doing something that has been made useless in almost all situations.

Or worse, government pays for people to interfere with and watch over the productive people, for fear that they will use their intelligence to cheat and steal from their employees and customers.

Remember, Karl Marx revealed that business owners are leeches on society, draining away the wealth that rightfully belongs to the workers. At least, the ones who have jobs.

There was no unemployment in the former Soviet Union. It was against the law to not have a job (unless you were disabled).

The government assigned jobs to people, and they had better show up. This policy was supported by the Soviet custom of not paying much, or anything in many cases.

Soviet workers had a motto: "They pretend to pay us, and we pretend to work".

This system worked for a long time until there was an unfortunate reorganization. Maybe we will do better.

I agree with Garland, but the old Soviet Union also decreased the labor pool by starving, murdering, transferring to the Gulag (where they died) upwards of 20million people. That reduced unemployment