Before We Spend $53 Billion On High-Speed Rail, Can We Get Low-Speed Rail To Run On Time?

Before We Spend $53 Billion On High-Speed Rail, Can We Get Low-Speed Rail To Run On Time?

Florida Governor Rick Scott has rejected Stimulus funds for the beginnings of a high speed rail system in Florida, claiming the proposed rail system was unnecessary and wasteful.

These stimulus funds were just a part of what the Obama administration hopes will be $53 billion on building a national high-speed rail network.

Before we spend $53 billion on high-speed rail, can we try to get low-speed rail to run on time?

Let’s start with the existing experiment with “high-speed” rail, the Acela Express between Boston and Washington, D.C.

And then hop aboard the Northeast Regional between Boston and Virginia Beach: 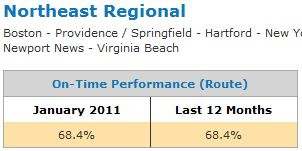 Followed by a transfer to the scenic Lake Shore Limited between New York and Chicago:

There is something which seems to make the trains run on time, Cars:

Sounds like a plan, a nationwide network of autotrains.  And Early Bird Specials.

I call it "The Great Train Robbery."

If there was any money to be made in passenger trains, CSX or NS or UP or BNSF would be making it.

Money is precisely why CSX, NS, UP, BNSF are out of the passenger business.

The historical record is that American railroads rarely if ever, made a profit on their passenger service.

The money was in freight, express service (a precursor to FEDEX, UPS et al), telegraph right of way royalties, and Subsidized transportation of the mail.

If passenger rail was real transportation in this country TSA would be checking passengers just like at the airports.

Why are we even having this conversation nationally?
Has anyone in this White House bothered to look at the economy lately?
High speed rail?
It's like I'm talking to crackheads. Why don't we just pull $100 billion out of our rear ends and build some pyramids while we're at it?

Good. I'm glad high-speed rail is dead. It was a stupid, pointless idea putting a high speed train route between two cities separated by a drive of a little over an hour. I know the reasoning behind it, but from what I had been hearing it would be cheaper for passengers to rent a car and drive the route rather than pay for an overpriced ticket, hop aboard a train, and hail a cab on the way out. This particular project has been doubly annoying because of all the local news outlets crowing about how important it was and how much it would benefit Orlando's economy (Channel 9 was especially vocal about its support for the project).

Good for Scott. So far I'm happy with what I voted for.

Jack:  The stimulus should have had more effect.
Bob:  I don't understand it myself. All of that spending produced so few jobs.

Jack:  Shhh! Never say it that way. Say "Our investment in the economy prevented a total collapse and preserved over 2 million jobs".
Bob:  We would need much more than 2 million jobs to have a full recovery.

Jack:  They're laughing at us. Obama promised shovel ready jobs, then he admitted that there weren't any. Almost all of the stimulus went to reduce state and household borrowing. If we spend more now, we must be able to point to the projects. Good, union work projects.
Bob:  How about building railroads, the miracle of the 19th century? Everyone likes railroads.

Jack:  We have plenty of railroads, and lots of capacity in our recession.
Bob:  High speed passenger rail, like the Simpson's Monorail. We can point to the trains, and they will go everywhere.

Jack:  Passenger rail loses money.
Bob:  The point is to spend enough to end this recession. It doesn't matter where it is spent, as long as we spend enough. And we will borrow enough to support the spending. Borrowing is free, because we won't have to pay it back during our administration. The Republicans will have to pay it back, if we're lucky. Or unlucky. Or something.

Jack:  That is actually good. You have exceeded yourself. Spend and spend, with real, steel tracks and big engines to point to. Shovel ready and unionized. This will save us all.
Bob:  (1) Spend lots of money.  (2) ???  (3) We will all be rich.

Jack:  Just like the Underpants Gnomes (skip to 17:40. Sorry about the 30 second commercial.).

Amtrak and the PO'd consumer…

"In summary taking Amtrak was a terrible experience. Arrogant unfriendly personnel, dirty bathrooms, cold temperatures because A.C. is turned up too high, dirty windows, too uncomfortable to get any sleep, trains don’t run on time, for what they charge for a sleeper you may as well fly. I would never take Amtrak again, I would drive first."

The Detroit-Chicago route is an example of what we perhaps ought to be doing and what we may well wind up doing.

My understanding, and I don't claim to be anything other than an interested layman, is that with improvements to the roadbed and signaling some modification to the equipment, and giving passenger trains the right of way, we could get the downtown to downtown run down to three and a half hours or so.

We need to keep in mind that a lot of the traffic on the route is not Detroit-Chicago but Detroit-Kalamazoo or Battle Creek-Chicago, say. I am told that this improvement, which would have some impact on road and air travel, would cost about a tenth that of high-speed rail.

The high-speed rail requires new and separate trackage, among other things, and would bring the downtown to downtown run down to about two and a half hours. In other words, to save an hour on the trip, a journey many passengers will not make in full, we are going to spend several billion dollars that we don't need to in order to make improvements that may be helpful.

Multiply this by St. Louis-Chicago, LA-san Francisco, and so forth, and we'll be paying for decades for something we don't really need.

You know who else made the trains run on time?

(for the humor impaired, that is a joke)

Early Bird specials to get the worm?