Spotted in Ithaca this morning.  Quite bold to put such a “Miss me yet?” sticker on your car in these parts of the country, and then to park it on a main road. 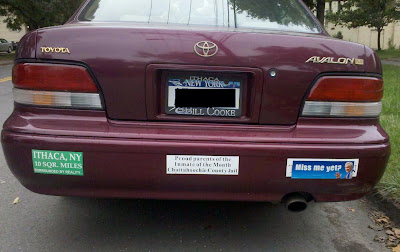 The first to identify the original gets an all expense paid trip to Disney World paid for by Charlie Crist’s campaign fund: 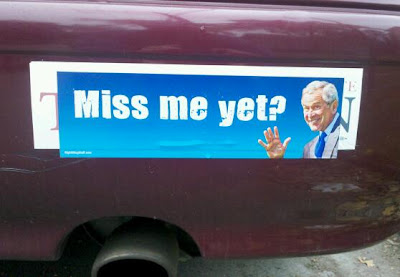 Update:  The mystery solved, somewhat.  I received an e-mail from the anonymous car owner (who reads this blog), in part as follows:

I was wondering when you’d get around to my collection.

The covered up sticker is one for US Senate from another state. It was given to me as a joke by a son who might be a Democrat, since the candidate is…. I won’t go into more details about the sticker.

I was disappointed that the Miss Me Yet? sticker was so small.

To answer one of your commentators, the Inmate of the Month sticker came about because it seemed that I was always behind a green mini-van, never the same one, that had a sticker bragging that the owner was a proud parent (always singular in Ithaca) of an honor student at such and such school. Nothing wrong with having smart kids, but I wanted to make my own statement and when I saw what I thought was a clever hand made sign on a pickup near Raleigh/Durham NC I copied it, using Chattahoochie (I misspelled it, as Southern isn’t my native tongue) as the jail….

It appears to start with a red O and end with a blue N–It might be Obama Biden or Obamnation.

I hope this isn't a trick question but the only thing I can come up with that starts with a "t" and ends with an "n" is "Think Reagan".

If this is "change", why don't we
TRY AGAIN

The top word on the right is "Vote" I'm sure. Who was running with a name that starts with 'T' whose last name ends with 'N'? I was thinking Joe Biden, but that doesn't start with 'T'. Hmmm…..

Is it a NY race? Or a national race? How many letters in the name? Hints would be nice……….. I'd offer to buy a vowel, but don't have "Crist's Campaign Cash" available. 😉

It can only have six or seven letters. Above the N, you can clearly see a smaller E with what looks like a T right in front of it, so I'm thinking a Senate candidate. NY doesn't have too many U.S. Senate candidates, though, and I can't think of any that start with T and end with N. It has to be a state senate candidate; or a candidate from years past.

Check out Chattahoochie County, since apparently this driver knows someone in that jail.

can't find a graphic,and the page is down,but it all fits:

Side-step: can anyone tell what state this one is from??? I don't know…

@lgstarr: It's a California plate.

I still like the small square green one on the left:

Can you actually deliver on the Orlando ticket promise? Not that I want it – been there done that, precisely once per kid.

http://libertyatstake.blogspot.com/
"Because the Only Good Progressive is a Failed Progressive"

I like the "Ithaca NY: 10 sqr miles surrounded by reality" bumper sticker. This driver sure has a great sense of humor.

At least Cornell has stopped asking me for money. Just wish Michigan would do the same!