The image of Obama as King (via Instapundit) has been inspired by Michelle Obama’s over-the-top journey to the coast of Spain, the latest in a line of seemingly imperial indifferences to optics in these difficult economic times.
The Daily News compared it to the royal court of Marie Antoinette:

To be clear, what the Obamas do with their money is one thing; what they do with ours is another. Transporting and housing the estimated 70 Secret Service agents who will flank the material girl will cost the taxpayers a pretty penny…. The Obama modus operandi is becoming clear. From lavish trips to Spain to reportedly flying Bo, the President’s Portuguese water dog, on a separate aircraft to vacation with them in Maine, to a date night in New York City that perhaps cost nearly $100,000, their idea of austerity is really just the lap of luxury, at least for ordinary folks.

Even the NY Times has taken note, First Lady’s Spain Vacation Draws Criticism, although The Times downplayed the controversy.

Unfair? I don’t think so.
First families are entitled to vacations, but the excessive cost to taxpayers of a trip to Spain with scant public purpose sends the wrong message.
Even before Obama was sworn into office, at least one of us saw it coming: 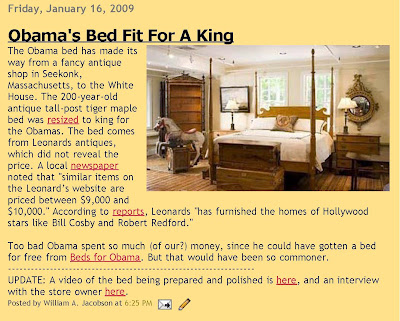 Makes one long for that ol' ranch in Texas!

The ostentatious trip is not as objectionable as Obama's glaring hypocrisy when it comes to the security arrangement of his own family vs that of the nation.

Michelle gets to close part of a public beach (in a foreign country!) with a security detail rigidly enforcing a virtual border around the family; beach goers who stray too close are subjected to searches.

But the people of AZ are vilified and sued by Michelle's husband for wanting to defend the nation's borders against the invasion of illegals and violent drug cartels.

Michelle should holiday in a AZ border town. Her security detail might do the job the Feds won't.

May I suggest that all this is perhaps a lapdog media providing cover? At the very least they appear to be providing a distraction for "private citizen" Michelle O. so she can do some unreported diplomatic hob-knobbing:

The original (in Spanish) from the Spanish paper El Mundo here:

The translation appears to be accurate. Rep. Jesse Jackson Jr. is there, and these various Arab dignitaries are on her unlisted/unreported schedule. Why is the "pravda media" not reporting on that while they pound on the obvious that she's wasting our money…….?

Also, on your prior prescient post: you saw it and stated the REAL Obama lifestyle!

Too bad they are still trying to peddle the lie that "they feel our pain" and "they're not too far off from the rest of us" – you know, us down here paying taxes, just poor shlubs who can't afford such excess!

Boo hoo for the Won and the FLOTUS! Keep 'em coming, professor!

My grandmother used to say "you shouldn't be so critical of your betters".

I would say that with the way things are going you had better get used to that phrase. The only way we can change it will not be nice.

This is the video on Michelle O's trip that "you've been waiting for". I don't guarantee that it will lower the oceans but I hope you'll be seeing a really good You Tube for a change:

Of course it was "resized to king". If you had to sleep next to Michelle, wouldn't you want as much space between you as possible?

The outcome for Marie and King Louis wasn't very pleasant.