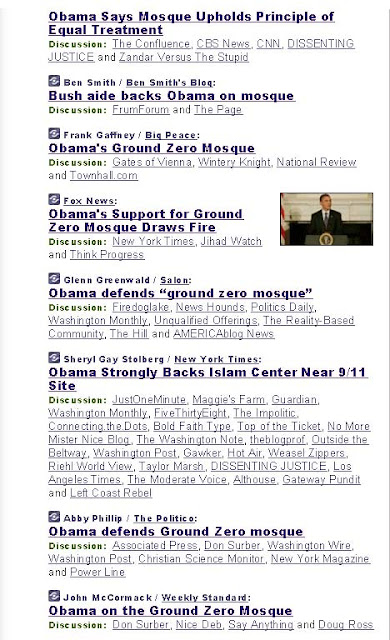 I am especially fond of greg Sargent' piece, praising the president's backbone in not ducking the issue but coming right out and supporting the mosque sponsors.

Remember, these are the smartest, very best people. Honestly, right after the politically disastrous trip to Spain, did O need to emphasize his support of a violent religion bent on our destruction? Damnation, how did this stooge ever get elected in the first place?

I am afraid we conservatives are going to have do some self policing on this matter.

I understand the emotional aspect of the Mosque case but what I am seeing in some places looks like the mob and I am not getting on board with some of the extreme stuff I am hearing.

I note that all Day Instapundit has not commented on this issue at which might be good but maybe not enough.

Public opinion is fickle and can reverse quickly especially if a viewpoint is going into the mean and misleading area.

The quicker we get back to the main focus the better. This is a dangerous topic in some ways that has to be handle with some finesse. The problem is you can;t do finesse well in blogland

Finess works just fine in blogland. Too bad the President of the United States so ineptly dealt with matters of the intersection of our cherished rights to practice both religion and free speech.

All he would have had to do is add that, while the right to build a religious building on private property is undisputed, other Americans have the right to publicly question the motives of the builders of the mosques, and to draw whatever conclusions they may from the answers. And, those other Americans, if they are dissatisfied with the answers, will be able to assemble and protest against the sentiments expressed by the builders of the mosque.

That is what we mean when we refer to a robust public discussion.

He could have gone even further. He could have said that one thing the builders of the mosque, by taking such a public stance, are going to have to face is the inevitable charge that the irhabists are the true face of Islam. There are people in this country that believe the irhabists, such as Osama Bin Laden and the various signatories to the Hamas and Hezbollah charters, when they claim that they are the true believers in Islam.

He could have added that we as a country are looking forward to hearing their answers on this point, and that we are willing to use our law enforcement capability to deter the irhabists from using their usual means to deny free speech.

Had he added three sentences to that speech, he could have won over the big center of the country, not to mention the vast majority of American Muslims, who came here to get away from the misery that is the Middle East.

C'mon. It is genius, admit it. Food is expensive for the jobless. But if you break people's hearts, they don't feel like eating.

I know my heart has been broken by my government's endorsement of the Ground Zero mosque. How about yours?

I disagree since it a situation that is impossible at times to self police. I know people are saying they are disputing the right for them to build but at other times I see things akin to certain values trump perhaps 1st amendment rights

As to the speech Obama gave I found it prettey much unremarkable. He said all groups would be treated equally under all laws. Nothing new there.

I guess I disagree with you on the President going further. I think they are quite aware there will be protests and inquires.

A few years ago conservatives were very upset when the San Francisco Bd of Supervisors passed resolutions against the Catholic Church and even a Christian Youth rally in the city. You had Council members stepping right in the middle of it and making religious judgments. Back then the reaction was correct horror that the City was taking sides in a religious affairs.

You stand by that principle or it falls. If not Then it bites Christians and other groups back

Let people discuss, let blogs, let the media investigate. However I am not for the Govt making proclamations on a religious dispute and theology. Where will that end?

Why the rebuilding of St. Nicholas church has been mired in red-tape http://www.nytimes.com/2008/07/03/nyregion/03trade.html?_r=1 whilst the mosque seems to be in the express lane is mysterious, eh?
On a lighter note, congratulations Professor, on moving up to #50 of all conservative blogs.
http://www.therightscoop.com/awesome-the-right-scoop-ranks-20th-conservative-blog

"However I am not for the Govt making proclamations on a religious dispute and theology."

The President would have been a hero, had he more thoroughly explained the intersection between the constitutional rights of freedom of religion and free speech. That happens to be part of his current job.

When he was running for his current office, he often referred to his background as an occasional assistant adjunct law professor in the field of Constitutional Law: I would expect him to be more articulate in his purported field of expertise.

The 1st Amendment isn't a building permit. The freedom to practice your religion doesn't come with a form of eminent domain. Context is everything. Just because you CAN do it doesn't mean you SHOULD do it.

This is about the community's objections to Imam Feisal Abdul Rauf's inability to show sensitivity to the emotional stakeholders at ground zero and its unwillingness to make concessions.

As for Obama, he has some gall to pontificate about 'religious tolerance' or the virtues of tolerance per 1st Amendment when this is the very same guy who at other times can't tolerate Americans who are exercising their freedom of assembly, denigrating them as 'tea baggers'.

" He said all groups would be treated equally under all laws."

The attempts to rebuild the St Nickolas church at ground zero halted at every turn by the New York bureaucracy point out the lies in these arguments; Christian church not allowed to rebuild, Muslim efforts Green lighted all the way.
That is not equal-that is Muslim appeasement.

Once again we get a peek behind the curtain…..and it's no friendly wizard there, my friends.

He's avoided investigations into selling his senate seat post-2008 election, offering illegal bribes to 2 senate candidates in 2 different states. Then suing a state government for enforcing federal laws that the federal gov't won't enforce, allowing Eric Holder (DoJ) to dismiss convicted criminals of election poll harassment, supporting trials for KSM and others in NYC….. This is indeed another illuminating moment.

What will be the final straw? After November, and the swearing in in January of the new Congress, we might find out.

President Obama ought to be looking at the most important factor "cost" in manufacturing how can anyone who believes in the principles of American Labor Unions vote for these people? Jobs!!! If the change we needed in 2008 (H.R.2830) had been voted on in the Senate after passing the house 395-7, according to a report prepared for Congress in Dec2009 this type of legislation would have caused the cost of foreign imports to rise as the legislation would require mostly foreign ships to retrofit with new technology to keep our water clean. Now the president dose not bother to instruct the Senate to work out the States rights issues of just one Senator. Senator Boxer killed this legislation, that could have created a cost competitive manufacturing base, again in America. Now our president as commander and chief has another study with the military, to coincide with their two decade plan to follow an international organization of economic interest,the IMO, rather than American legislation to regulate what numeric limits of human pathogens and virus we will allow mainly foreign ships, bringing foreign made goods into our country, to dump in our waters. It is to bad that economic globalization is considered more important by this administration than increasing our manufacturing competitiveness and protecting our waters.