At Reid campaign headquarters, the dozens of mudslinging campaign staffers must feel like the walls are closing in on them.

A new Rasmussen poll shows Sharron Angle leading by 2 points if “leaners” are included, and tied without leaners.

Reid stuck his foot in his base’s mouth by siding with those opposed to the Ground Zero Mosque, leading one prominent left-wing blogger to call Reid a “tower of jello” and even the usual sycophants are fed up.

There also are rumblings of a potential scandal, which at a minimum will consume campaign time and focus.

Reid certainly is not out of this race, but if he hoped to deliver a knock-out punch to Angle during the period of several weeks when Angle had no money and barely any campaign staff, Reid missed.

Reid cannot justify his own re-election, so his campaign has embarked on a campaign of “vaporizing” Angle by portraying Angle as crazy.

Angle has shown an ability to adjust her campaign in the past weeks, has hired a professional campaign staff, and has sharpened the focus of her campaign themes on key issues of the economy and jobs.

Reid has gone about as far as he can go with his crazy campaign, but his vaporizer-in-chief appears not to know it: 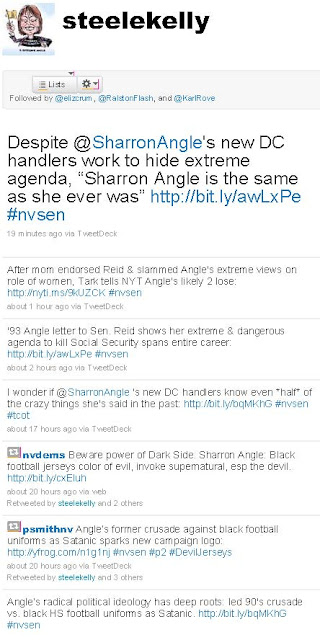 What is that saying about the “definition of insanity”?  Seems to fit the bill of the Reid campaign.

Which makes the Reid campaign … err … the crazy one.

Btw, on that scandal of how Harry Reid might have been funded by basically a pimp, i want to say it was really, really unfair to report that.

People don't understand. Reid was not getting a campaign contribution. He was being paid for services rendered.

It won't be hard for Reid as Angle is crazier than a loon.

This Kelly Steele goon has an avitar that reminds me of a mixture of Pelosi and Cindy Sheehan, with a touch of that loon leftist lawyer who was disbarred for giving information to her terrorist client. What was her name? I just can't recall.

Dear Nevada: please look at this goon, and the Head Goon Reid, and see that Reid needs to be voted OUT!

Reid campaign staffers, in defense of Read, probably say to themselves "He may be a crazy sonuvabitch, but he's our crazy sonufabitch"

I hope the mudslingers keep going with the crazy schtick. Nevadans gotta know how pathetic it is for the man who has been senate majority leader for nearly 4 years to be so ashamed to run on his record that he resorts to an endless character assassination campaign. I expect many moderates and independents will be so sick of the negative ads by November they will vote for Angle just to spite Reid.

When Reid broke with Obama and said he hopes the mosque will be built someplace else, I suspected he did so because he has internal polling suggesting he is in deeper trouble than everyone believed.

I was not surprised that Rasmussen's polling released today show Angle is gaining momentum –Reid had already telegraphed as much with his mosque remarks. That was Reid moving to the center to try to connect with the mainstream.

He is in desperation mode.

channeling Otter…"oooooh, this is gonna be great!"

as long as Sharron will focus on jobs and economy message, while Harry keeps calling her extreme and crazy – she is going to win.

Outside The Strip, Las Vegas is becoming a ghost town. Nevada has the worst unemployment in the nation, even worse than Michigan and California. When Obama dissed Las Vegas some months back, telling Americans to not go there, Harry was strangely quiet. He never, to the best of my knowledge, defended the City of Lights. LV Mayor Goodman did what Harry should have done – but didn't – with slamming back at POTUS. On that alone, Angle can mop the floor with Dingy Harry.

Harry also bent over backwards to block the congressional investigation into ACORN… and with the voter registration fraud ACORN perpetuated in a number of states, including Nevada, it appears that Harry has a lot of potentially ugly secrets. Painting Angle as "crazy" is the only direction his campaign can maintain to keep the spotlight off Harry. Heck, even son Rory is avoiding using his surname in his campaign for governor. That's just plain sad.