The world learned that the go-ahead had been given for the execution by firing squad of Ronnie Lee Gardner when the Utah Attorney General Mark Shurtleff sent out this tweet: 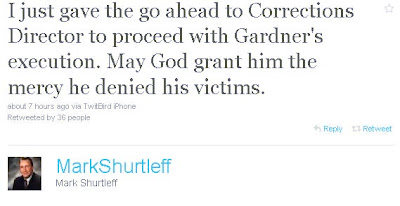 Please tell the next four tweets will be:

Everyone commenting on this everywhere needs to lay off. He's talking about a guy who was no good to our society. He earned the death sentence. Quit acting like you care soo much.