I’m On The Case of Angle v. Reid

I’m On The Case of Angle v. Reid 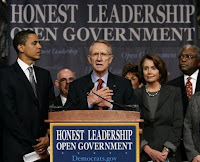 I’ve found it. The 2010 race about which I can get motivated the way I was motivated by Scott Brown v. Martha Coakley.

There are plenty of choices out there, and I’ll likely add more to my focus, but I’ve found The Race.

It’s not the one I expected.

I figured I’d sit out the monumental task of taking on Harry Reid because the race, regardless of who was his opponent, would draw so much attention from others with bigger megablogophones than I did.

But seeing the attacks on Angle in the last few days was all I needed. It was Palin August/September 2008 all over again.

The mainstream media and nutroots have made Sharron Angle target no. 1; that’s all I needed.

The Democrats have a strategy of crazy because their policies have been so disastrous and their rule so inept. So they will tear down people like Angle, turn them into caricatures, and do anything else necessary to avoid talking about unpopular policies which have put us on a course towards economic and political suicide.

I documented yesterday how Greg Sargent at The Washington Post distorted two of Angle’s positions to make her seem more extreme, as Sargent was noting how the Reid game plan was to paint Angle as a “whackjob.”

The mere distortion of Angle’s positions was mild compared to the garbage being thrown Angle’s way already:

Harry’s hopes for November looked bleak,
With Republican odds at their peak.
But he’ll easily wrangle
The wacky Ms. Angle.
Thank you, wingnuts for picking a freak.

Steve Benen, another prominent left-wing blogger calls Angle “unhinged.” One of the bloggers at Firedoglake refers to Angle as “one salty nut.” And Rachel Maddow is in attack mode, repeating the same distortions in the Sargent posts, and then some. And you can be sure that Think Progress will be smearing Angle, much as it tried to paint Scott Brown as a “Birther” and tie him to the suicide plane crash on an IRS building.

If that were not motivation enough, remember that Harry Reid has been the engineer on the train wrecks called Obamanomics and Obamacare.

There is no person more responsible for the disaster of the Obama presidency than Reid, because without Reid’s maneuvering (the Cornhusker Kickback, the Louisiana Purchase, etc.) the Obama agenda would have gone nowhere.

Whatever Angle’s positions, they could not possibly be more extreme and damaging to the nation than the damage to our health care system and economy caused in large part by Harry Reid.

And Harry Reid is as nasty as can be towards those who disagree with him:
[youtube=http://www.youtube.com/watch?v=aojj53Af-60]

Taking back the Senate is a long shot, but regardless, Harry Reid must go. There is no greater priority in the 2010 Senate contests.

So I am making Sharron Angle v. Harry Reid a priority.

Harry Reid plans on raising $25 million. Angle may not be able to contend with that large fundraising, but as the Brown v. Coakley race showed, an Army of Internet Davids can generate enough money and energy to overwhelm Harry Reid’s bank account.

And one of the most important tasks we can perform is to expose the distortions being spread, because without those distortions, Harry Reid doesn’t have a chance.

I hope you’ll join me on election night for another Live event, when we can wish Harry Reid a nice life, as a private citizen.

Update: Nice to see Angle is hitting back on the “whack job” attack:

——————————————–
Related Posts:
The War Against Sharron Angle Comes To WaPo
Coakley Supporters Fabricate Birther Accusation Against Brown
A Warning For The Next Scott Brown

I joined the Angle brigade last night. I easily found her site and made a small donation. I live in Georgia but like you think this is the most important race for Senate this year.

Any amount, however small or large, helps.

I am very excited about your choice!

I live in Reno NV and our local newspaper, RGJ.com (Reno Gazette Journal) was on the spin the day after the election with negative tweaks on Angle. Please generate as much as you can to fight this fight.

Your wish is my command, Professor.   I just donated @ sharronangle.com .
.

I love the fire in her belly she displays in the video embedded in your update. I have a feeling she's going to be a stronger candidate than many on the left want to believe.

And I love her position to abolish the Education Department. Education is clearly the responsiblity of the state and local government. The federal government should not be meddling in the state's business about education. Reagan tried abolishing it, too, but he couldn't get it done.

With the tireless Prof. Jacobson at the helm, Sharron Angle is now 12 steps closer to beating the pants off the dishonorable Harry Reid in NV. Bravo, William – I live in AZ, but have now made my donation to Angle. This is an excellent race for you to back.

I dunno. Pelosi, for example, crafted a lot of the health care monstrosity. And as Speaker, she decided who got to join the "debate". Maybe it's a toss-up.

This election is going to be one to watch. First, because Reid's defeat would be – will be – a hard blow to the Democratic Left. Second, because Nevada is a pretty big union state, those unions will support Reid. And by "support", I mean "do whatever it takes to get him re-elected".

We've already seen what lengths SEIU is capable of.