I saw a thread on Memeorandum linking to a ridiculous post, titled Bush, Slave Labor and Arizona, by the founder and Editor of BuzzFlash.com, Mark Karlin.

BuzzFlash bills itself as a progressive online community, which probably is why I had not heard of it before, despite its claim to traffic of 5 million visits a month.

The punch line of the post was that the Arizona immigration law was pushed by a “right wing populist movement consisting of NRA types, white firsters, Christian End Times congregrations, and basic bigots,” whereas George Bush would not have allowed such a thing, because Bush sided with “slave wage corporations” which like illegal immigration. This is what passes for praise of Bush in the progressive community.

In trying to figure out who this guy was and what was BuzzFlash, I saw this video by Karlin explaining the background of the website and his progressive agenda. 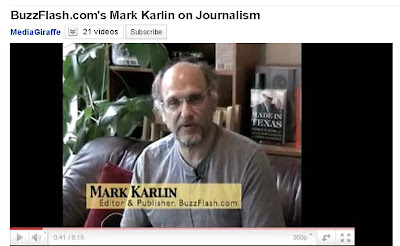 Karlin sure does look like someone familiar, but I can’t put the face to a name. 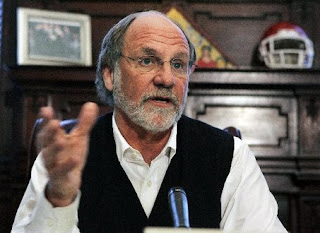 John Corzine? Is that you? WTF?

Every couple of months our shower drain slows to the point where I finally have to do something about it. I typically pull out a mass of hair mixed with clotted soap and God-knows-what-else. My son loves it…it being perfect gross-out material for an 8 year old boy.

I'm not saying that Karlin looks like that clotted mass of goo. But his picture DID remind me that it was time to clean the drain again.

If I recall correctly, Karlin has received about a quarter of a million dollars alone over the last 5 years for gun control advocacy.

The above info was from http://armsandthelaw.com/archives/2005/04/joyce_foundatio.php

“We needed to invest in more resources,” says Mark Karlin, who runs Squid Ink with Frank Lichtlin. “Derek is bringing us to that next stage.”

There is also an aircraft company run by someone with the same name.

Boy, he DOES look familiar, like someone I've seen. Definitely a Dem. I'm thinking a congressman or senator, very possibly no longer in office. It's driving me crazy.

Of COURSE, Corzine! Thank you.

"Man that is a strong resemblence…" What she said!

Put an explosive device in his hand and he could look like Bill Ayers.

Very popular (but not by choice) with Chicago Communist thugs.

That face should give every person who has ever lived in New Jersey under Corzine shivers.

Looking at that picture made me appreciate Chris Christie even more.

Next time, please Professor, a warning for those of us who still live here in New Jersey!

Sorry, I was going with Larry David. (Sorry, no pic)

I thought that turd poseur looks more like Rob Reiner from his Meathead days.